Invictus Energy Limited (ASX:IVZ), is pleased to announce that the company and its Cabora Bassa Project partner, One-Gas Resources (Pvt) Ltd (20%), have entered into a non-binding Memorandum of Understanding (MOU) with Sable Chemical Industries Ltd (“Sable”) to progress gas supply from the Cabora Bassa Project subject to a commercial gas discovery being made from SG 4571.

The supply term of 20 years provides strong revenue visibility in the event that Cabora Bassa is transformed into a source of commercial gas supply.

Not only is this a positive development in terms of Invictus’ prospective earnings profile, but it will be a significant factor in the company being able to satisfactorily negotiate financing terms and/or make the project increasingly attractive for farm-in partners.

Sable is the sole manufacturer of agriculture grade ammonium nitrate fertiliser in Zimbabwe and a potentially large gas consumer.

Under the MOU, Invictus and Sable have agreed to jointly work together and cooperate with regards to investigating the economic and commercial viability of supplying natural gas from the Cabora Bassa Project to the Sable fertilizer plant located in Kwekwe, Zimbabwe.

As indicated below, the Sable plant could be included in the potential SG 4571 pipeline route. 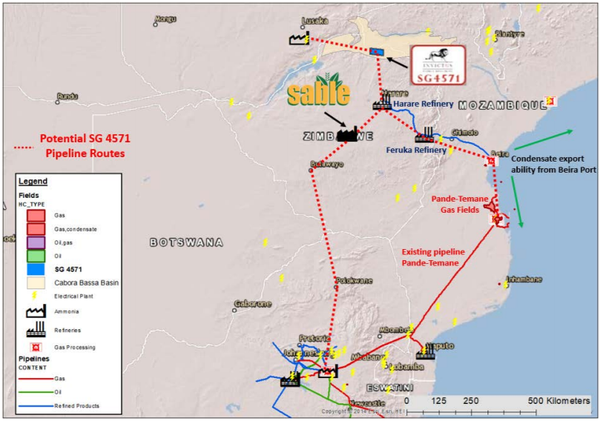 Invictus managing director Scott Macmillan highlighted the significance of this indicatively sizeable offtake agreement saying, “Signing this MOU with Sable marks a significant milestone in our commercial negotiations as we look to progress the Cabora Bassa Project.

“Sable is the sole producer of nitrogenous fertilizer in Zimbabwe and a well-recognised brand in the country.

“We are proud to work with them to fulfil their ambition of becoming the preferred manufacturer and supplier of fertilizers and other chemical products in Africa.

“The potential gas supply of up to 70 million cubic feet per day for 20 years is a substantial volume which will help underpin the development of any commercial gas discovery we make in the Cabora Bassa Project.”

This MOU demonstrates the huge local gas demand in an energy starved market in Zimbabwe, and Invictus expects to enter into additional gas supply MOUs in the future.

Developments such as these generally provide positive share price momentum, and today’s news along with the prospect of further offtake agreements could be the catalysts for a rerating after the company has flown under the radar during the exploration phase.

Sable Chemicals was established in 1969 and currently operates a fertilizer manufacturing plant which produces ammonium nitrate fertilizers from ammonia gas feedstock which is currently imported from South Africa.

The company has a large plant with the capacity to produce 240,000 tonnes of ammonium nitrate year.

Sable plays an important role in supplying the agricultural sector where demand for competitively priced fertilisers is increasing.

The potential future supply of gas by Invictus is also critical for Sable’s medium-term expansion program aimed at increasing production to 600,000 tonnes of nitrogenous fertilisers.