It pays to keep an eye on stocks that have been oversold in the wake of oil price volatility, particularly those at the smaller end of the scale.

It was only a fortnight ago that shares in IPB Petroleum Ltd (ASX:IPB) stacked on 200% in a matter of days.

The company released its quarterly activities report for the three months to 31 March, 2020 on Thursday, flagging some important news that could see its shares continue their strong run.

IPB has continued to progress discussions and information exchanges with potential farm-in partners, debt financiers, intermediaries and their representatives.

During the quarter, IPB received a non-binding term sheet for full funding of the Idris well offshore Western Australia with farm-in from one party.

The principal activities of IPB Petroleum centre on conventional hydrocarbon exploration and associated activities relating to its three exploration permits along the southern margin of the Browse Basin offshore north-west Australia as shown below. 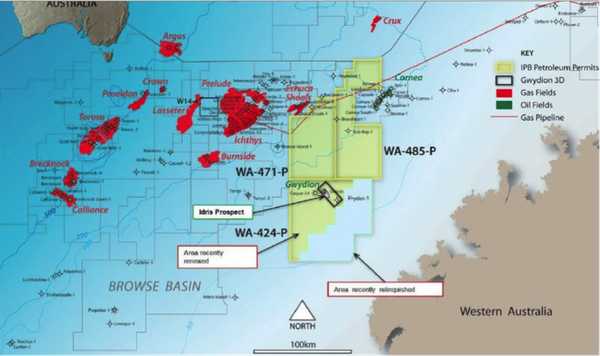 Management remains in discussions with the relevant party, as well as with other interested parties and intermediaries, despite delays associated with COVID-19 and a low oil price environment.

Further economic analysis and study work was completed in the March quarter.

Scenarios of a Phase 1 and Phase 2 development, based on success with the proposed Idris appraisal well, were also completed and provided to potential financiers and farminees.

It is important in the current environment to note success at the proposed Idris well supports economic profitability at relatively low oil prices on a most likely basis.

Should these discussions result in the ratification of firm agreements this would be a significant share price driver for the group.