On October 24, Finfeed suggested that the 7% increase in IPB Petroleum’s (ASX:IPB) share price could be the start of a significant and sustained recovery after the stock was sold down over the previous six months.

At that stage the company’s shares were trading at 2.6 cents, but only yesterday they closed at 3.3 cents, representing a further gain of 27%.

IPB’s share price has now doubled in less than two months, and today the company’s chairman, Bruce McKay discussed the group’s focused program to optimise its key assets after some recent divestments.

IPB is one of what could be argued a relatively small clutch of microcap companies in the resources sector that has a strong focus on financial discipline.

Rather than throwing good money after bad on high risk unproven assets, management has chosen to focus on the highly prospective Gwydion asset (WA-424P), offshore Western Australia, and the appraisal of the oil discovery through the drilling of a well at Idris.

From a broader perspective the principal activities of IPB Petroleum centred on conventional hydrocarbon exploration and associated activities relating to its three exploration permits along the southern margin of the Browse Basin offshore north-west Australia as shown below. 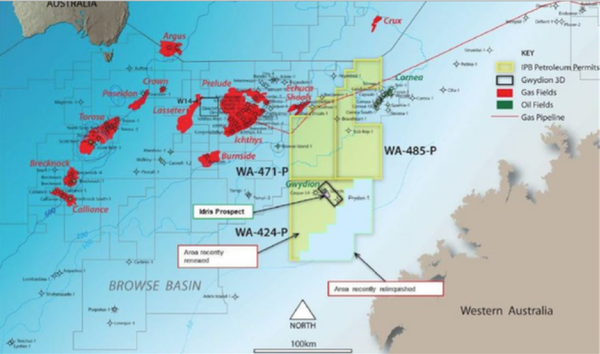 Note that permits relating to certain assets held in that region have been relinquished as management has taken the decision to focus on prospects that offer greater visibility in terms of monetisation.

On this note, McKay explained the decision to relinquish two adjacent permits in saying, ‘’So it was consistent with this strategic direction (focusing on Gwydion) to relinquish the company’s less mature adjacent permits WA-471P and WA-485P with their extensive work and expenditure commitments and concentrate on our primary asset of WA-424P and Idris.

‘’Management also identified and explored the innovative approach of an Extended Well Test and continues to work this option specifically how to achieve our objectives within the regulatory framework and financing constraints.’’

McKay conceded that nothing is ever risk-free, but management’s decision to direct its efforts towards the aforementioned primary assets is not only backed up by solid reliable technical analysis, but there is evidence to suggest that the size of the prize makes for an attractive risk/reward scenario.

In the coming weeks, management will be meeting with a number of companies and investment groups in the United Arab Emirates, several of which continue to progress the opportunity of participating with IPB in the drilling of the Idris well to appraise the Gwydion oil discovery.

Should the company be successful in attracting a funding/development partner, management will then proceed to commercial development of the field.

As a backdrop, the Gwydion well drilled by BHP in 1995 was at the time a non-commercial gas and oil discovery.

However, it encountered gas on oil with good quality reservoir and fluid properties.

From a geological perspective, there is sidewall core evidence of residual oil in the gas column indicating that gas has displaced oil and the pressure data indicates that the gas, oil and water are in hydraulic communication in one container.

Providing further confidence for IPB is well documented data by Geoscience Australia that the oil encountered in the Browse Basin (at Caswell and Gwydion) was sourced deeper in the basin and generated relatively early in the basin’s geological evolution then migrated a significant distance towards the basin margin adjacent to the Australian continent.

Subsequently, the massive gas resources, including those which have been developed as world-class LNG projects at Ichthys and Prelude, were generated later in geological time and migrated to the existing structural traps and also to the basin margin on the Yampi Shelf.

Management noted that this is also supported by seismic signatures indicating gas at Mathonwy and Gilfaethwy.

Consequently, IPB presents as a company that could see significant share price upside should it pave the way for commercial development.

IPB would then transition into a news flow driven story as the company establishes the size of the resource and the returns on investment that could be expected from developing the field.