Invictus Energy Ltd (ASX:IVZ), has received highly promising results from a recent independent study aimed at establishing a maiden prospective resource at its Cabora Basa project in Zimbabwe where it owns 80% of permit SG 4571.

A summary of the report findings is shown below.

It was just this morning that Finfeed featured Invictus and eight other emerging energy stocks to watch, highlighting this upcoming news as potentially market moving for the company.

"There is likely to be significant news flow as the company progresses its work program to de-risk and add value to the Cabora Bassa Project.

"The results of the technical work in the year ahead including an independent maiden prospective resource estimate could provide share price momentum, as would the negotiation of a farmout agreement.

"As can be seen in the chart below, IVZ’s shares nearly doubled post the acquisition of the Cabora Bassa project, but market volatility has seen a retracement in recent months, a trend that could be reversed as the company continues its basin modelling technical work.”

The below chart demonstrates this morning’s strong share price reaction to the news, as well as the exceptionally high trading volumes. 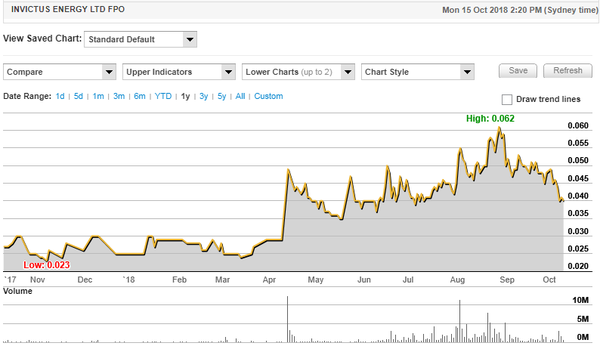 Shares surge 80% with more to come

The establishment of a maiden prospective resource has definitely been well received with the company’s shares trading as high as 7.3 cents, representing a 12 month high and an increase of nearly 80% compared with its last closing price.

It is also worth noting that this occurred under all-time record volumes.

However, there could be substantial upside to come as indicated by Macmillan who said, “This estimate excludes the additional prospective horizons above and below the Upper Angwa in the Mzarabani structure, as well as further plays and leads within the SG 4571 area which have the potential to add material prospective resources to the Cabora Bassa Project.

“The high side estimate of over 2.2 billion barrels of oil equivalent (boe) gross is enormous and confirms Mzarabani as potentially the largest undrilled seismically defined structure onshore Africa.”

Invictus will provide estimates on the additional potential at the Cabora Bassa Project which will benefit from the ongoing 2D seismic reprocessing and interpretation work.

Following on from the reprocessing work, a Final Independent Prospective Resource Report encompassing the entire SG 4571 area will be delivered early next year, another relatively near-term potential share price catalyst.

The company will continue with its geological and geophysical studies including additional basin modelling and a further resource estimate leading into a planned marketing program to attract a farm-out partner.

Securing a farmout partner would be a major development for the group as it would provide a degree of certainty around financing and strengthen confidence in the group’s ability to progress through the more detailed exploration stages.

How Invictus transformed itself

The last 12 months has been a transformational period for Invictus with the company entering into a binding sale and purchase agreement to acquire a 100% interest in Invictus Energy Resources Pty Ltd in April.

This effectively provided it with an 80% interest and operatorship in the SG4571 Permit (Cabora Bassa Project) located in Zimbabwe.

The acquisition of Invictus and the interest in the Cabora Bassa Project, which contains the Mzarabani prospect, represented an opportunity to secure first mover advantage and a dominant acreage position covering potentially the largest, seismically defined, undrilled hydrocarbon structure onshore Africa.

The Cabora Bassa Project encompasses the Mzarabani Prospect, a conventional gas-condensate target which at that stage was estimated to be in excess of 1 trillion cubic feet (tcf).

The prospect was defined by a robust dataset acquired by Mobil in the early 1990s that included seismic, gravity, aeromagnetic and geochemical data.

The outcome of this most recent report certainly supports the validity of the Mobil data, suggesting it will go on to be a valuable source of information for future exploration.

The capital raising which was well supported by company directors was completed in June.