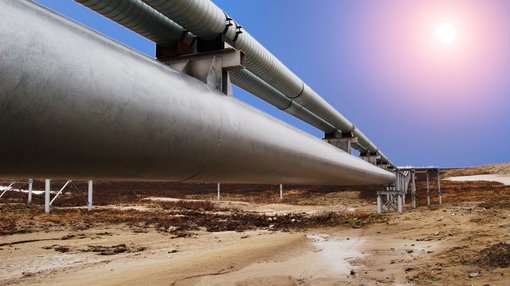 This stock is classified as ‘very high risk’ in nature due to its location and geopolitical situation of the region. FinFeed advises that extra caution should be taken when deciding whether to engage in this product, however if you are not sure whether it is suitable for you we suggest you seek independent financial advice.

Zimbabwe may not be the first place that comes to mind when one thinks of attractive oil and gas opportunities. However, a change in government and pressure to find new regional energy sources in light of the Southern African energy crisis has seen Zimbabwe garner increased attention as a potential hydrocarbon producer.

Zimbabwe’s new President Emmerson Mnangagwa has welcomed foreign investment to the country, declaring that “Zimbabwe is open for business”.

That’s worked out well for Interpose Holdings Limited (ASX:IHS) that, as announced today, has agreed to acquire an 80%interest and operatorship in the Cabora Bassa Project in Zimbabwe via the 100% acquisition of Invictus Energy Resources Pty Ltd. The capital raising associated with the transaction was heavily oversubscribed.

The Cabora Bassa Project, or Special Grant 4571, covers 250,000 acres over the most prospective part of the Cabora Bassa Basin and contains the Mzarabani prospect identified previously by Mobil. The prospect is a mature conventional gas-condensate target with TCF+ potential that requires only a low cost work program to progress to a farm-out or drill ready.

The acquisition of Invictus and its interest in the Cabora Bassa is an opportunity for IHS to secure first mover advantage and a dominant acreage position covering potentially the largest, seismically defined, undrilled hydrocarbon structure onshore Africa.

Of course it remains an early stage play for HIS and investors should seek professional financial advice if considering this stock for their portfolio.

The timing of the award of the permit and last year’s change of political regime in Zimbabwe, has coincided with improving conditions in the oil and gas industry, and exploration is now firmly back on the agenda as companies look for new growth opportunities. SG 4571 was granted in August 2017 with an initial six month work program which has already been completed.

The new Zimbabwe Government and Ministry of Mines and Mining Development has signalled its desire to attract new foreign direct investment, particularly in the resources sector. To do this, the new government has appointed an experienced mining industry executive as the Minister of Mines that understands the needs of industry and implemented investor friendly economic reforms.

Favourable investment terms for special mining leases have been introduced including 15% flat tax rate, 100% remittance of earnings, no restriction on carry over tax losses, and full write off on capital expenditure including exploration, development and operating expenses. Most importantly, the Zimbabwe government has amended the Indigenisation and Empowerment Act which opens the door for 100% foreign ownership of assets and guaranteed property and investor rights. These actions have resulted in renewed industry confidence and interest and led to significant new investment activity in the country.

Also working in favour of the Cabora Bassa Project is the current Southern Africa power crisis and the lack of domestic energy security. The crisis is having a negative effect on growth in the region resulting in a huge push to adopt gas as an alternate energy source to coal.

The good news for IHS is that there are numerous opportunities to monetise oil and gas in a starved domestic and wider regional market, including:

The project is proximal to existing and future pipeline infrastructure for the domestic and export markets. It’s two hours from Harare by road and has excellent access with dual lane tarmac all the way to the permit and it is located in a non-farming area on State Land with extremely low number of inhabitants and wildlife.

Here is the Cabora Bassa Project (SG 4571) along with other oil and gas projects and operators in the region. 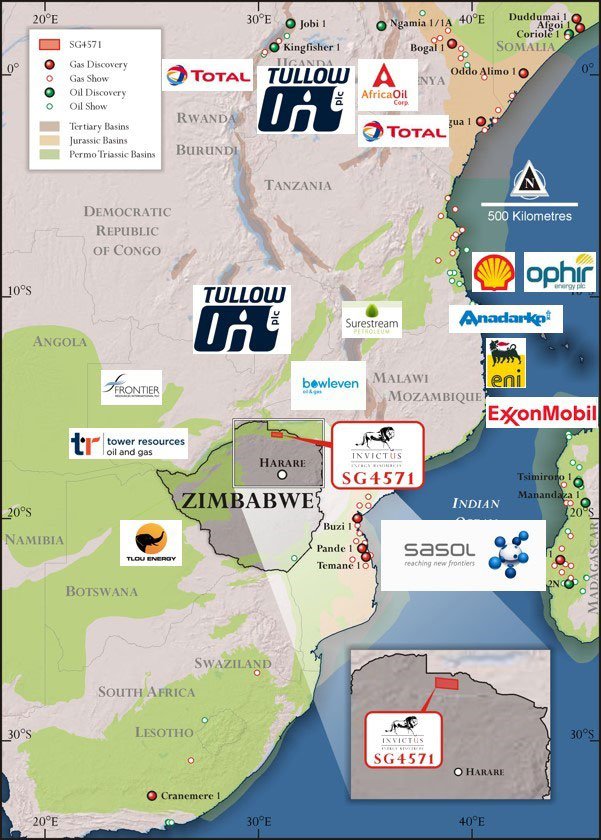 There is significant regional activity underway in the oil and gas space as Karoo aged rift plays gain attention and regional license rounds have attracted established East African Rift players to this play type. This is good for IHS as near term activity and news flow from neighbours will enhance the value of the Cabora Bassa Project.

Invictus was the first mover into the Cabora Bassa portion of the greater Zambezi Valley rift play that extends from Namibia, through Botswana, Zambia and Zimbabwe, into Mozambique. The company secured the most prospective acreage in the basin, as well as the extensive legacy data set.

Here are the regional Karoo hydrocarbon discoveries mapped out: 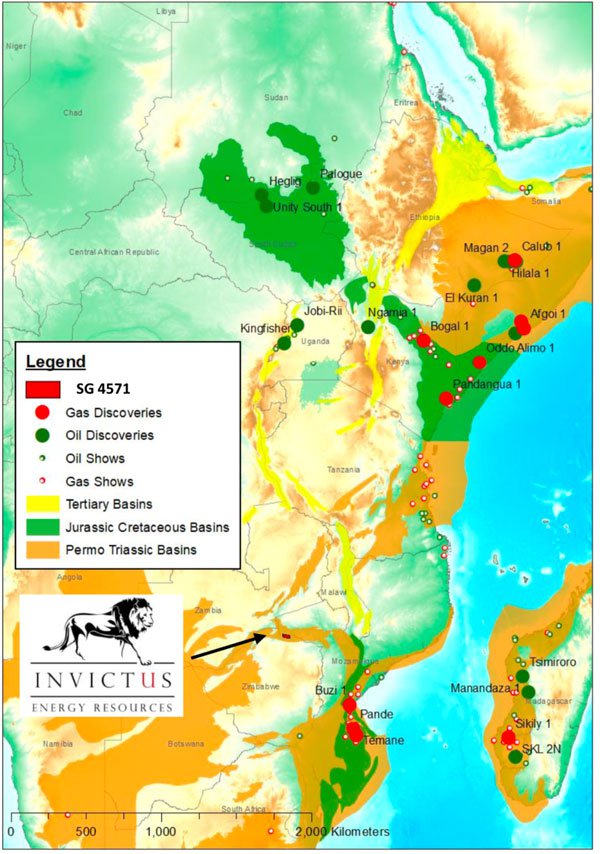 Back in the early 1990s the acreage was held by Mobil, when the company was lured to the Cabora Bassa Basin by the size and potential that had been identified by regional aeromagnetic surveys, which revealed thick sedimentary sequences within the rift basin.

Mobil was searching for big oil targets and spent US$30 million acquiring surface and subsurface data, including gravity surveys and over 1600 line kilometres of 2D seismic data. Their studies determined that the Cabora Bassa Basin has all the required ingredients of a working petroleum system and concluded that the Mzarabani Prospect contains conventional gas-condensate reservoir properties. 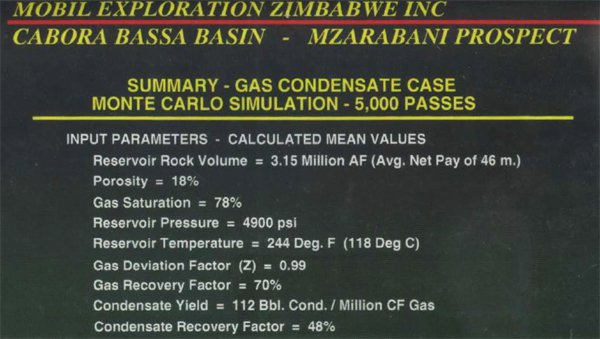 However, Mobil relinquished the acreage when it determined that the basin had higher potential for gas rather than oil and at that stage and there was a lack of market for gas in the region.

This means that the project comes to IHS with an extensive legacy dataset — approximately US$30 million worth spent on 2D seismic, gravity, aeromagnetic and geochemical data which demonstrated that all required elements for a working petroleum system are present.

IHS plans to reprocess this legacy data and independently evaluate SG 4571 and the Mzarabani gas-condensate prospect.

The company will then undertake geophysical and geological studies utilising the latest seismic processing techniques which have significantly improved since the data was acquired over 25 years ago. This will be followed by prospect generation and prospective resource determination, and finally the farm out process.

The application of today’s modern exploration techniques along with the existing extensive dataset means that only a modest work program is required to mature the prospect to drill ready status.

As part of the proposed transaction, Interpose will appoint experienced oil and gas executive, Scott Macmillan, as the Managing Director. Macmillan is a Zimbabwean national and reservoir engineer with over 12 years’ experience in oil and gas. He was previously the Business Advisor in the Global New Ventures group for Woodside Petroleum (ASX:WPL), which focused on Africa exploration, and the Senior Reservoir Engineer for AWE Ltd (ASX:AWE), responsible for the Waitsia Gas Field development in Western Australia. He also has extensive business experience in Zimbabwe.

Macmillan also has history with the Cabora Bassa basin, as he became aware of the project nearly a decade ago and was immediately attracted to its technical merits, given the considerable dataset that Mobil acquired and the fact that they had already identified a substantial conventional gas-condensate prospect within the basin.

IHS has secured commitments to raise up to $4.5 million, by way of a placement of 150,000,000 fully paid shares in the IHS at $0.03c per share that has been hugely oversubscribed.

Though it does remain a speculative stock and investors should seek professional financial advice if considering this stock for their portfolio.

The funds will be used to fund a focused exploration program on the Cabora Bassa Project, including reprocessing of the gravity and aeromagnetic data and 1990’s vintage Mobil 2D seismic; conducting an environmental impact assessment study; funding third party independent resource certification; and beginning preparations for drilling the first exploration well in the basin.

In consideration for the acquisition of Invictus, and the 80% holding of the Cabora Bassa Project, IHS will pay a one off fee of $US500,000 to One-Gas Resources Private Ltd, (an entity controlled by the local Zimbabwean partner that holds SG 4571); and will issue the vendor, Bayethe Investments Pty Ltd, (an entity controlled by Mr. Macmillan), an option and exercise fee totaling $A75,000 and consideration shares equal to the value of 19.9% of the total issued shares in IHS post the completion of a capital raising to raise $A4.5 million. IHS will also issue the vendor with performance shares based on three performance milestones.

The project has plenty of upside, as noted by Invictus, “near term activity is low risk, low cost, but high value add.”