The estimated quantities of petroleum that may potentially be recovered by the application of a future development project(s) relate to undiscovered accumulations.

As can be seen below, the near vertical edge of the build-up is clearly visible on the 3D seismic, providing evidence of its isolated nature. 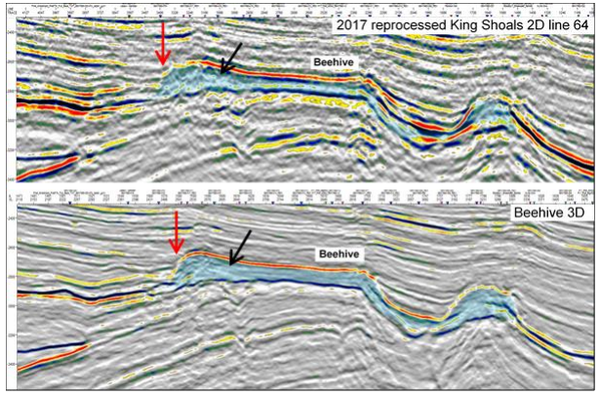 Furthermore, the 3D data details depositional patterns within the platform and the seaway that was not able to be resolved on the existing 2D data.

The many benefits of 3D data coverage include that it has allowed for better structural definition overall, particularly to the north-east.

Observations made at this stage strongly support the existing geological model for Beehive, and these improvements in data quality and coverage have further de-risked the Beehive prospect.

Total and Santos each have an option, exercisable together or individually, to acquire a direct 80% participating interest in the permit and drill an exploration well, which is planned to be the Beehive-1 exploration well.

Management estimates that the cost of the Beehive-1 exploration well will be in a range between US$40 million and US$60 million, and that in the event of the option being exercised, drilling will start in the second half of 2020.

Promising preliminary interpretation of the newly acquired 3D seismic data will provide interested parties with a better understanding of the Beehive Prospect, and perhaps be an additional enticement for Total and/or Santos to exercise their options. On this note, Melbana chief executive Robert Zammit said, “The improved imaging from the Beehive 3D is fully supportive of Melbana’s interpretation and very encouraging.

“We look forward to Santos and Total finalising their position regarding their option prior to October 2, 2019 and for them to continue to progress readiness for potential drilling in the second half of 2020 in the event the option is exercised.”

The option to farm-in and drill the first exploration well is exercisable at any time by Total and/or Santos, but no later than 2 October, 2019.

A number of other parties have expressed interest in reviewing the Beehive opportunity, pending a decision by Total and Santos.