Invictus Energy Limited (ASX:IVZ), has provided an update on progress at its 80% owned and operated Cabora Bassa Project in Zimbabwe ahead of high impact drilling planned for 2021.

The company successfully concluded its recent field operations and reconnaissance program in the Cabora Basa Basin.

The prospect is defined by a robust dataset acquired by Mobil in the early 1990s that includes seismic, gravity, aeromagnetic and geochemical data.

Additional detailed traversing and mapping across the area have been completed and identified the optimal acquisition routes.

The company is making significant progress on executing the first seismic acquisition program in the country for 30 years and is working closely with the seismic contractors on a planned acquisition campaign in 2021 to commence once the rainy season has concluded.

This will be followed by a high impact basin opening drilling campaign to test the petroleum potential of the Cabora Bassa Basin.

The progress that has been made in 2020 has been value accretive for the group with the company’s shares increasing more than six-fold since March.

In technical terms, a significant sequence of mudrock interbedded with sandstone, giving rise to typical ‘ridge and furrow’ topography, was observed for several kilometres along a section coincident with the traverse completed along proposed seismic line L35.

The conclusion drawn by management from this observation is that the post-Dande Formation, in this locality and possibly elsewhere, contains a significantly larger proportion of mudrock than previously recognised.

Such developments could have significant intra-formational seal potential for this sequence and de-risk a key element of the petroleum system for this play.

The observation of these significant mudrock sequences within this unit is consistent with the interpretation of better developed seals moving basinward.

The interpretation is further supported by the elevated amplitude anomalies which may indicate the presence of hydrocarbons on the high side fault trap.

As illustrated below, this potential presence of hydrocarbons is coincident with the previously identified Lead A feature in the post-Dande formation and could indicate a competent seal and reservoir pair. 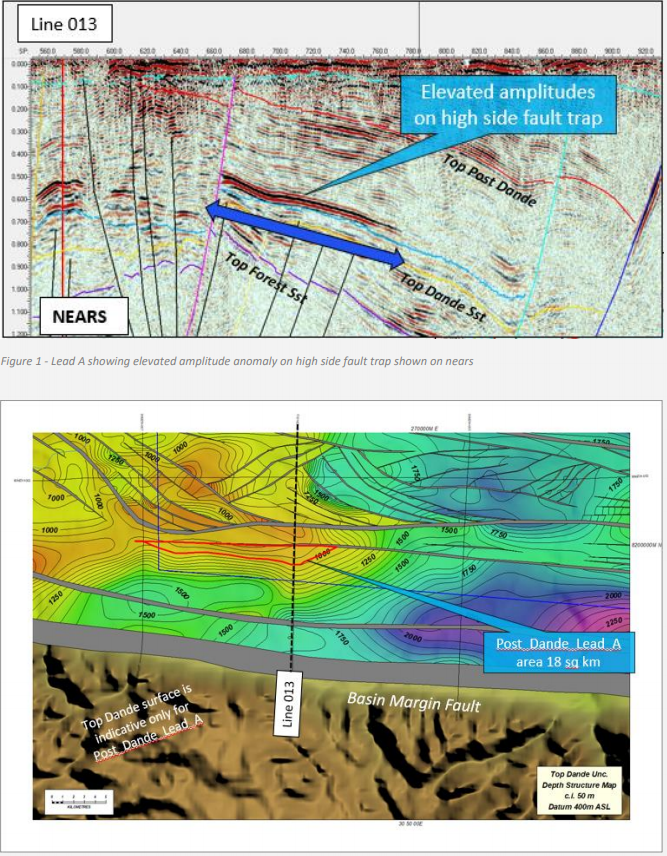 These younger sequences (Dande and post-Dande) were not the focus of previous studies or operators and as a result little information on the potential of this sequence has been gathered until now.

The reconnaissance program has also identified additional locations for further geochemical sampling and analysis which is being undertaken.

In the interim, the Production Sharing Agreements with the Republic of Zimbabwe continue to progress and are now in the approval process.

Updates to the market regarding progress in finalising the PSA and any associated government approvals could provide further share price momentum.