Global industry attention on near term catalysts for Pancontinental

Pancontinental Oil and Gas NL (ASX:PCL) has established an outstanding record as a wildcat oil and gas group, having evaluated by the drill bit several globally significant exploration plays during its long history.

It was due to evaluate another big play where it took a stake in offshore Namibia when the oil price collapse hit.

However, the resurgent oil price, along with the more recent identification of larger offshore oil reservoirs has again underlined the high prospectivity that lies in Namibian waters, resulting in some of the world’s largest oil companies grappling for territory adjacent to Pancontinental’s ventures in blocks PEL 37 and PEL 87.

Most recently, oil giant ExxonMobil farmed into the block next door to PEL 37 for a 40% interest.

This block contains an extension of the play trend Pancontinental is drilling with the Cormorant-1.

The well is due to spud in September following extensive evaluation and exploration efforts by Pancontinental and its joint venture operator and partners.

It should be noted here that the company remains a speculative stock and investors should seek professional financial advice if considering this stock for their portfolio.

Importantly, Pancontinental is not financially exposed to the drilling costs of the well as per the previously negotiated farm-out agreement with Tullow.

In addition, Pancontinental will receive at spud of the well a cash payment of US $5.5 million (AU$7 million) from Africa Energy Corp. which is the second instalment of its investment into Pancontinental’s subsidiary and the PEL 37 project.

To gain an appreciation of the value of this territory and the past success of Pancontinental in identifying big exploration plays in potentially oil-rich regions it pays to step back to the period when the group first acquired PEL 37.

The company initially targeted this area in 2007, being awarded a 30,000 square kilometre offshore reconnaissance licence.

Pancontinental subsequently went on to demonstrate the prospectivity of this area just prior to the oil price crashing.

Look at the big names Pancontinental was rubbing shoulders with at that time in the deep waters off Namibia and you will see why investors took a shine to it. 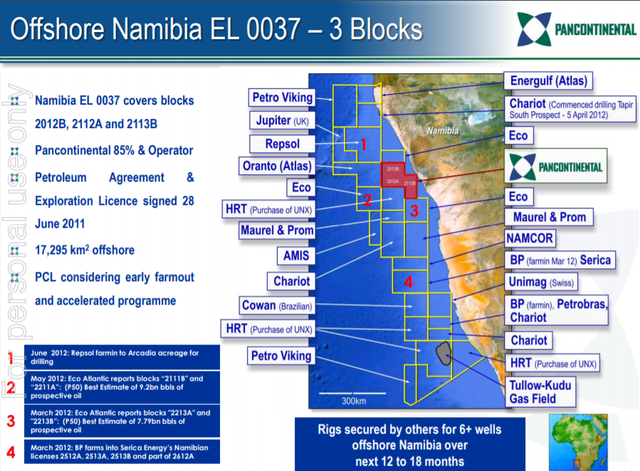 The company raised $15 million at 7.5 cents per share in December 2011 to assist in funding exploration activities across its African licences.

Within three months, Pancontinental was trading in the vicinity of 25 cents.

By June 2012, the company had raised circa $50 million at 17.5 cents per share, implying a market capitalisation of circa $200 million with cash of $55 million. 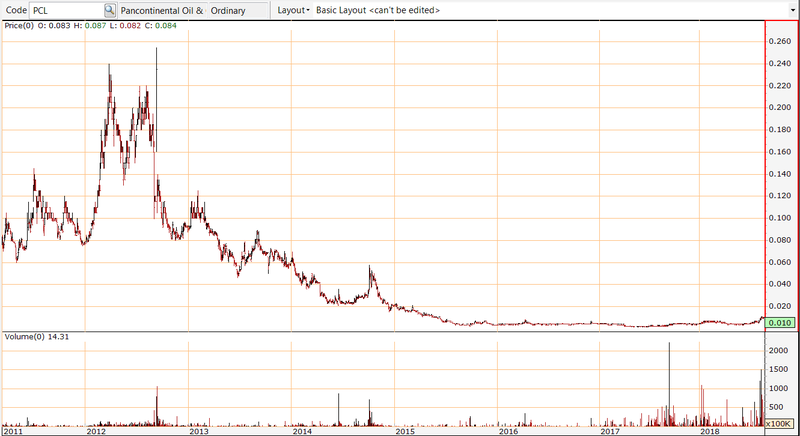 The drilling programmes had mixed success, finding the first oil and gas accumulations offshore Kenya but deemed at the time to be uneconomic. What happened next was out of Pancontinental’s control with an initial steep dive in the oil price occurring in mid-2012 as the following chart indicates, followed by a couple of years of volatility and a monumental crash between 2014 and 2016 when it fell below US$30 per barrel. 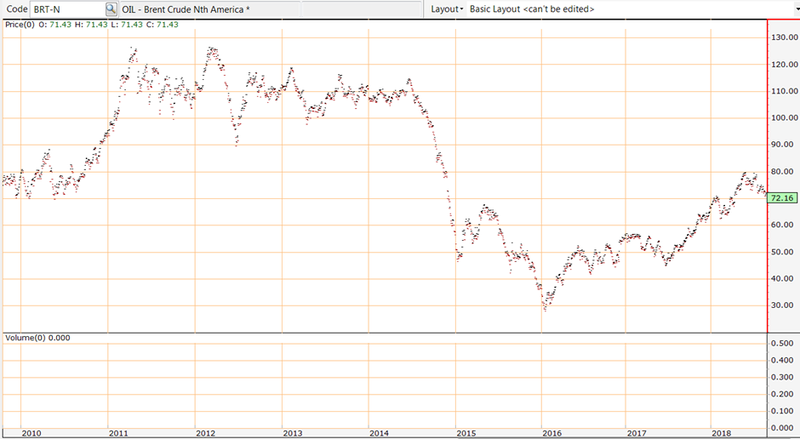 Importantly, while the oil price wasn’t the only driver, Pancontinental set itself up in the African region with highly leveraged drill opportunities giving itself an excellent chance of success with regard to current and future projects.

With investors now wading back into the sector, Africa has once again become a key focus – so much so that there has been intense activity by the majors. Note the transformation between 2012, as illustrated earlier, and 2018. 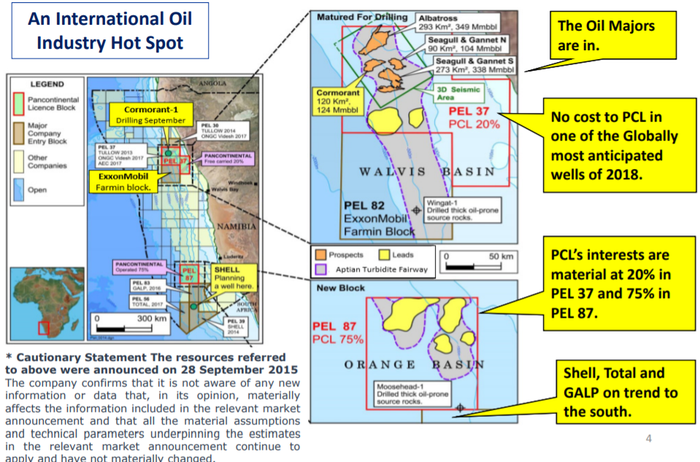 While it is only natural to focus on the steep climb in Pancontinental’s share price in 2011-12, and the decline that occurred as the oil price plunged, it would pay to take a glance at the number of shares traded this month with three days of 100 million+ shares traded, making it the highest weekly trading period in the company’s history, including the 2011-12 period when the company’s shares went through the roof.

This coincided with a near doubling in the company’s share price.

Undoubtedly, the greatest value adding moments for oil and gas exploration companies come via the drill bit – the discovery of large volumes of oil or gas with clear commercial potential.

A recent example of this dynamic is Carnarvon Petroleum (ASX:CVN).

PEL 37 will be the next ASX junior testing a big offshore oil play with the September spud of Cormorant-1 in 545 metres of water.

The project operator is Tullow Oil, one of the most successful oil explorers in Africa.

Cormorant is one of four large prospects mapped in a cluster on 3D seismic, all within the company’s block PEL 37 and with collective potential for 915 million barrels* of recoverable oil.

With a 75% stake and operatorship, Pancontinental was awarded another huge block, PEL 87, in Namibia earlier this year.

Good science and smart deals got Pancontinental into such a promising position in Namibia, now a global oil industry hotspot.

At a market cap of circa A$50 million at a share price of 1cps, with a fully cost-carried 20% interest in PEL 37 plus A$7.3 million in cash coming in at spud, Pancontinental has tremendous leverage to one of the most exciting oil plays in the world.

Of course, it does have a way to go to match the likes of Carnarvon and Shell, so seek professional financial advice if considering this stock for your portfolio.

While there is no doubting the valuable territory under exploration, one of the most vital aspects in terms of capitalising on what lies beneath the surface is a strong management team.

We will come to current CEO John Begg shortly. However, former CEO Barry Rushworth is one who has stayed on and provides extraordinary expertise in the region.

Rushworth remains as a non-executive director and the highly experienced geologist retains responsibility for Pancon’s African interests. Rushworth has been responsible for identifying, negotiating and acquiring international new venture opportunities in Malta, Kenya, Morocco and Namibia and is renowned for working closely with international government bodies and attracting blue chip joint venture partners to Pancontinental’s projects.

Along with John Begg this makes for a highly experienced team.

As mentioned earlier, Pancontinental has a history of identifying first-class projects, but has sometimes struggled in terms of capitalising on such opportunities.

The appointment of John Begg as chief executive in July 2017 has been an important development with the group given his expertise across project management, operating in diversified geographical regions and generating investor support through capital raisings and merger and acquisition negotiations.

Begg is an industry-leading geoscientist who has lived and worked with consistently high business impact in Australia, developing Southeast Asian countries, the UK, Middle East and the USA.

He has been instrumental in the discovery and development of commercial oil and gas fields on three continents so far.

On this note, as Pancontinental did with PEL 37, management expects that the early mover advantage should attract strong partners into PEL 87 as its mapping and documentation of the scale of the oil potential advances.

Commenting on the upcoming drilling of Cormorant-1, Begg confirmed the company was on track for a September spud and added, “We are obviously keen for the well to commence as the first test of the giant scale oil potential within the block.

“No doubt ExxonMobil, who recently farmed into the immediately adjacent acreage, will be watching closely for the outcome.”

According to Wood Mackenzie, the global energy research and consultancy group that reports on all aspects of the upstream oil and gas industry, this will be one of the most watched offshore wells anywhere in the world this year.