The oil price has recovered most of the ground lost in September when it declined from about US$68 per barrel to US$58 per barrel.

In a sustained run since the start of October, the oil price has rallied approximately 10%, and it appears to be going through a period of stabilisation, trading comfortably above the mid-point of the extreme lows (US$30 per barrel) and highs (US$85 per barrel) that have prevailed in the last five years.

Some of the major players have already run on the coattails of this trend with Woodside Petroleum (ASX:WPL) outperforming the oil price as it surged 13% in eight weeks.

Santos (ASX:STO) is up by similar amount with the other major, Oil Search (ASX:OSH) just shy of that mark.

EverBlu Capital research analyst Russell Wright released a report yesterday suggesting there may be much better upside to be had by stepping outside the blue chips - in fact, well outside.

Wright believes that the $3 million BPH Energy Ltd (ASX:BPH) has promising prospects with the ability to capitalise on the development of one or some of the assets held by Advent Energy, an oil and gas exploration group in which it has a stake of 22.6%.

His implied share price target of 0.4 cents which also includes ascribed valuations for companies in other sectors such as medical devices implies upside of 300% to Thursday’s closing price.

One of the most attractive features of BPH’s interests is its diversification by geography and commodity, as well as offering exposure to both onshore and offshore oil and gas.

The latter is important for a smaller company such as BPH as it is much less capital intensive to drill and develop onshore projects than conducting deep water exploration and rig construction.

It is also worth noting that Advent’s portfolio of energy assets includes licences where contingent resources have been established.

For example, in the Northern Territory Advent holds Licence RL1 (166 square kilometres in area), which covers the Weaber Gas Field, originally discovered in 1985.

Advent has previously advised that the 2C Contingent Resources for the Weaber Gas Field in RL1 are 11.5 billion cubic feet (Bcf) of natural gas following an independent audit by RISC.

Significant upside 3C Contingent Resources of 45.8 Bcf have also been assessed by RISC.

The rapid ongoing development of the Kununurra region in northern Western Australia, including the Ord River Irrigation Area phase 2, the township of Kununurra, and numerous regional resource projects provides an exceptional opportunity for Advent to potentially develop its nearby gas resources. 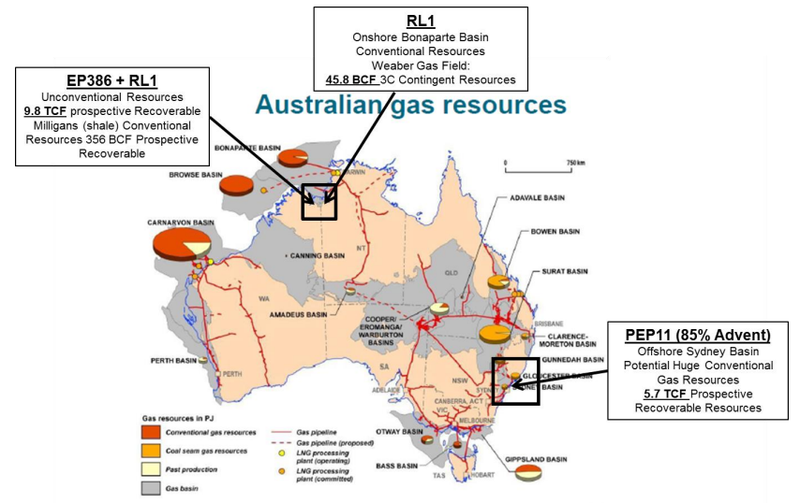 These assets are located onshore in the Bonaparte Basin, and Wright highlighted that this is a highly prospective petroliferous basin, with significant reserves of oil and gas.

With significant regional resource projects being conducted in the area, Wright pointed to market studies that have identified a current market demand of up to 30.8 TJ per day of power generation capacity across the Kimberley region that could potentially be supplied by Advent Energy’s conventional gas projects in EP386 and RL1.

While Wright acknowledges the potential of the Northern Territory and Western Australian assets, he sees Petroleum Exploration Permit 11 (PEP 11) as the group’s cornerstone project.

The permit which covers 8,250 square kilometres is located in the Sydney Basin which he sees as containing all the elements seen in other producing world-class structures.

Importantly, it is in close proximity to Australia’s largest energy market and extensive gas infrastructure.

As a backdrop, Advent assumed operatorship of PEP11 in 2008 and has since generated an extensive accumulation of data demonstrating an active hydrocarbon system in what is considered a proven petroleum basin.

The permit has recently been estimated to contain 13.2 trillion cubic feet (TCF) prospective recoverable gas resources (at the P50 or ‘best estimate’ level).

Advent has conducted a focused seismic campaign around a key drilling prospect in PEP11 at Baleen, in the offshore Sydney Basin.

A drilling target on the Baleen prospect at a depth of 2150 metres subsea has been identified in a review of previous seismic data.

Advent is now evaluating contracting semi-submersible rigs to drill the Baleen well to evaluate a target of multi-TCF size.

As Finfeed discussed earlier in the week, BPH also has a 4.56% stake in medical device group Cortical Dynamics which could be increased to at least 14% at this stage.

Cortical has received both TGA approval and the CE Mark and has now commenced its sales campaign.

Wright explained that a capital restructure could see BPH’s stake in Cortical Dynamics rise to 19.7%, and he concluded that in such circumstances a valuation of $3.15 million could be ascribed to BPH.

This is how he crunched the numbers:

A simple way to value Cortical Dynamics is to recognise that they are currently seeking to raise an extra $2m through issue of 20,000,000 shares at a price of $0.10.

Provided this equity raise is successful, then Cortical Dynamics’ total outstanding shares will increase to 133,353,431 at a market price of $0.10, providing an estimated market value of $13.3 million.

In addition, BPH and Grandbridge Limited are seeking Cortical shareholder approval (at their 29 November AGM) for the conversion of $2,653,586 in debt into 26,535,857 Cortical shares.

Provided this equity raise is successful, then Cortical Dynamics total outstanding shares will increase to 159,889,288 at a market price of $0.10, providing an estimated market value of $16 million.

Given this BPH shareholding of 19.7%, their ownership of Cortical Dynamic can be valued at $3.155 million.

Wright values BPH’s holding in Patagonia Genetics at $500,000, bringing his total valuation to $5.05 million which provides the foundation for the share price target of .04 cents.

Patagonia Genetics is a craft cannabis company based in Patagonia, Chile boasting a genetic collection of over 260 unique cannabis and hemp strains, carefully collected from industrial hemp cultivations of the late 1980's whose germination rates were verified in late 2016 with knowledge of the Livestock & Agriculture Service (SAG).

Patagonia Genetics boasts a Chilean gene pool that has remained greatly isolated from international markets until recently, whilst a large proportion of its unhybridized landraces haven’t been seen in domestic markets for over 30 years.

Patagonia’s physical collection of 30,000 seeds includes a variety of hemp and cannabis strains that have been selected for their exceptional terpene profile, production yield, pest resistance, uniqueness, CBD/THC content, and medicinal properties.