In an update on its 2019 drilling program at its 100% owned Nomgon IX coalbed methane (CBM) production sharing contract (PSC) in Mongolia, Elixir Energy Limited (ASX:EXR) report that it has spud its key well for 2019.

The program’s prime aim is the drilling of two fully tested core-holes — with an option for a third, the results of which will feed into a contingent resource assessment in the new year. These core-holes are targeting Elixir’s developed CSG leads, which were defined by surface outcrop, gravity and 2D seismic mapping.

The Ugtaal-1 core-hole spudded last Monday, November 11 2019 and as of Sunday 17 November it had reached a depth of 122 metres. So far it has intersected lithologies include conglomerates, carbonaceous mudstones and thin coal stringers.

Two rigs are being used and both have been winterized, while the desorption lab has been set up at Ugtaal-1. 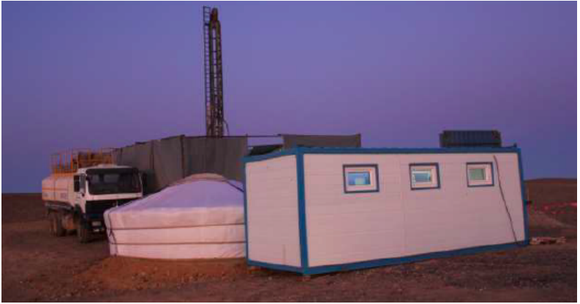 Elixir note that all wells are being drilled under a turn-key contract such that the company is paying on a per metre basis, rather that per day.

Prior to the spud of the first core hole, Elixir’s drilling program started with low cost chip-holes with multiple calibration and exploration aims.

Analysis has now commenced on the encouraging findings from the BO-CH-1 chip-hole, which reached a total depth of 738 metres. The chip hole demonstrated gas in the system, coal seams of a thickness which are productive in Australia and natural fracturing which may support good permeability.

The BO-CH-2 chip-hole had reached 408 metres as at Sunday morning.

Elixir’s Managing Director, Mr Neil Young said, “With the spudding of the Ugtaal-1 core-hole we have now commenced our key well for 2019. We anticipate the well reaching the Permian section later this week after which we will start testing coal cores for their gas content.”