Shares in gas producer and explorer, Sacgasco (ASX:SGC) have traded in a volatile fashion over the last few weeks, but investors haven’t been disappointed. Given the group is on the verge of releasing results from a potentially game changing well, there are bound to be plenty of investors pondering whether it is time to wade into the stock or take a profit.

The good news for SGC is that the majority of money has been with the former with the few retracements that have occurred in the course of surging some 150 per cent from 9 cents a month ago to a recent high of 23 cents, resulting in some of the highest volume buying in the company’s history.

Investors may have another chance to buy into a dip with the company’s shares pulling back to 15.5 cents on Wednesday. This was under comparatively weak volumes and didn’t appear to be related to any particular news flow, but it has provided a buying opportunity.

Of course, historical data in terms of earnings performance and/or share trading patterns should not be used as the basis for an investment as they may or may not be replicated. Those considering this stock should seek independent financial advice.

Though management released some news regarding testing procedures at its Dempsey 1-15 this was mainly to do with the logistical side of the group’s operations and in no way related to the results of upcoming test results.

However, FinFeed took the opportunity to catch up with SGC’s Managing Director Gary Jeffery. We discussed the extremely positive developments that have occurred over recent weeks and the bigger and better things that may be expected from the drilling of nearby wells.

In terms of Dempsey 1-15’s current status though, it is business as usual with Jeffery saying, “Dempsey 1 is entering a very exciting stage as we gear up to test the multiple zones that were identified during the drilling phase and we have contracted a workover rig that can deal with the anticipated high reservoir formation pressure that we expect to encounter”.

Jeffery confirmed that Dempsey 1-15 is a breakthrough well and a potential game changer for the Sacramento Basin, as well as SGC. With a stake of 50% in the project, immediate access to the existing pipeline infrastructure and broader regional asset ownership, SGC has unparalleled leverage to what could evolve as a re-evaluation of many of its assets that have exposure to surrounding territory. 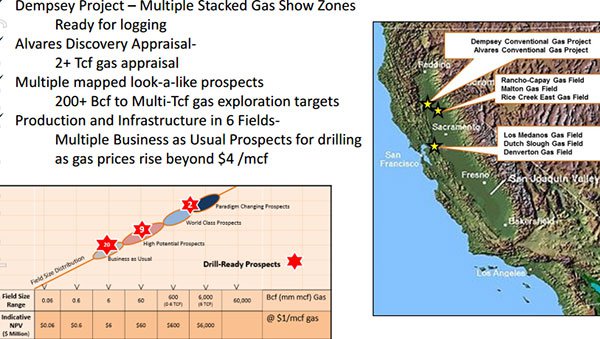 The exploration and production profile of SGC’s assets as outlined above indicate that the company is punching above its weight, particularly given its conservative market capitalisation of circa $40 million.