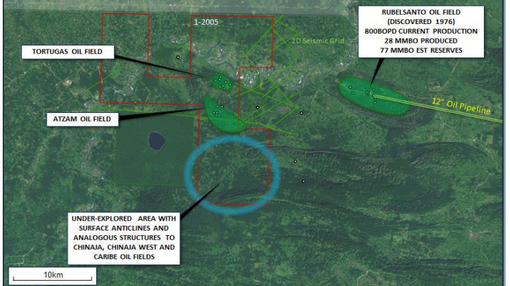 Citation Resources Ltd (ASX: CTR) is widening the target sections and testing the flow rates of its Guatemalan Atzam #5 well after the delivery of a specialised set of drilling tools.

The testing program at Atzam #5 was recently delayed whilst the drill operator Schlumberger sourced and delivered a larger 7” perforation gun from Mexico to the well’s location offshore Guatemala.

The equipment is now on site and in operation.

This new phase of drilling and testing comes after the well was drilled to 4,025 feet and capped at 3,600 feet.

The well’s analyst Schlumberger conducted a survey of the area and discovered a ‘significant commercial potential’ at the Atzam #5 well with log evaluation stating there was a carbonate zones more than a 200 feet wide with many sections proving to have high gas saturations and porosity.

Independent estimates rate the Atzam field as containing up to 20M barrels of recoverable oil.

CTR has one well already in production, Atzam #4 which was flowing at a rate of 170 bopd (barrels of oil per day) in the March quarter under natural pressure with no water cut with an eventual ramp up target of 400 bopd.

The company has a 60% interest in the Atzam field and is seeking to develop it with its drilling operator and Joint Venture partner Latin American Resources (LAR).

The spudding of Atzam #5 was delayed by heavy rain but once work began the operator Schlumberger drilled down to 4,025 feet and capped the well at 3,600 feet.

A new 7” perforation gun has now been delivered to the site and has been run into the hole on wireline.

The larger diameter tool will enable more of the targeted carbonate sections to be opened up to the wellbore. CTR says this will help evaluate the commercial flow rate potential of each zone.

The immediate work program at Atzam #5 will be focused on the C18 carbonates located behind the production casing which lies above the final casing point at 3,600 feet.

Testing operations will recommence on the C18 carbonate sections from around 3,500 feet and move steadily upwards along the wellbore to test the prospective sections behind the production casing identified from the detailed log data.

Reserve report for Atzam #5 being prepared

At the end of April, CTR announced it believed Atzam #5 showed promise and that it had a higher structural depth compared to Atzam #4 and #2, along with a flow rate of in excess of 1,000 bopd.

Detailed analysis of the Atzam #5 well began mid-May and drilling was successful down to more than 4,025 feet, with numerous pay zones being discovered along the way.

Schlumberger, a supplier of technology, integrated project management and information solutions, carried out the analysis.

CTR says Schlumberger’s log analysis and the oil shows from several zones tapped into by the drilling demonstrates the commercial potential in the well running from the C13 carbonates down to the C18 carbonate structures.

The company says all these potential commercial pay zones will be perforated and tested as part of this ongoing program until a zone produces at material commercial rates.

CTR says if any of the zones are found to be commercially viable they will be put into production, echoing the development of the C17 producing zone in its nearby Atzam #4 well.

The company also notes that a review of the Atzam #5 log data confirms the well has very similar reservoir characteristics to the Atzam #4 well which is producing 170 bopd under natural pressure.

The latest news from the drill site at Atzam #5 is that testing operations have now moved from the open hole section of the well below 3,600 feet.

This is where the lower C18 and C19 carbonates were tested during June and produced hydrocarbon, although not in the commercial volumes required for success.

The full Schlumberger log dataset and all of its associated drilling reports have been provided to the independent reservoir consultants Ralph Davis and a detailed reserve report for the Atzam #5 well is being prepared based on these figures.

After the first portion of drilling operations at Atzam #5 were completed, a full suite of electric logs was run from the first carbonate sections intersected down to the well’s total depth of 4,025 feet.

Schlumberger then completed an independent review of the electric logs run across all carbonate sections in Atzam #5 and has passed it on to Ralph Davis to help with its reserve report.

CTR has issued its March 2014 Quarterly Activity Report which says its Atzam #4 production well produced at approximately 170 bopd whilst maintaining a flowing tubing pressure over 200 psi for most of the period.

An initial independent report on the well’s six foot producing zone has increased the potential recoverable reserves to 325,000 barrels of oil.

The well’s operator also began a programme to increase the choke size of the well from mid-January and CTR says the production performance from the six foot perforated section in the C17 reservoir over the past nine months is very encouraging.

The flow rate and well head pressure is being maintained from natural reservoir energy with no associated water production.

CTR puts Atzam #4’s total production for the quarter at 13,227 barrels. This was achieved despite several periods when the well was shut in for pressure testing and well head maintenance.

CTR reports that the Atzam #4 well is continuing to produce from natural reservoir pressure without the need for a submersible pump to assist its flow rates. This sort of technology is usually required for the type of carbonate reservoirs Atzam #4 is tapping into.

Looking to the future of the well, CTR says its well production plan is to continue increasing the choke size and find the best production rate.

An equity research note from the analyst Argonaut on CTR has been released with analyst Dave Wall giving a price target of $0.046 based on a quoted price at the time of $0.013.

Wall’s research was issued in late March after the spudding and casing of CTR’s Atzam #5 oil well offshore Guatemala.

He notes that the drilling of Atzam #5 is being taken with a different approach, with production testing equipment on site so that testing can occur simultaneously with the drilling. Wall highlights the ongoing choked back flow rate of 170 bopd at the nearby Atzam #4 well, and the upside potential for the entire Atzam field as high as 20 mmbbl, as good signs for Atzam #5.

However, Wall also notes the risks inherent with oil drilling and says CTR’s share price has not behaved as predicted despite the near term potential uplift in value presented by the well’s spudding.

Wall says Argonaut interprets this situation as “being partly related to market conditions but also to delays in operations and unusual selling volumes.” He says the “inexplicable selling” appears to have been exhausted so Argonaut is back to expecting a speculative uplift based on news flow from shows and flow tests.

While CTR continues to test the drill hole sunk at its Atzam #5 well, an independent reserves estimate based on drill logs is being prepared by Ralph David. The report will cover reserves for both the Atzam #5 well and the larger field.

Test results from the larger targeted carbonate sections opened up by the 7” perforation gun now in operation at Atzam #5 are expected to be released soon while updates on the performance of the Atzam #4 well flowing at 170 bopd are ongoing.