Air pollution in China is a critical issue. Thankfully, it isn’t one that’s being ignored with the country taking steps to reduce its particulate and carbon dioxide emissions and its reliance on coal. At the same time, China’s rising reliance on crude oil imports is worrying too, as geopolitical tensions heat up in the Gulf and the South China Sea.

In response, the country has turned to gas. Specifically LNG imports, as domestic and regional gas producers can’t keep up with the rising demand.

LNG is produced when gas is converted into a super-cooled and liquified form so that it can be shipped to its customer. But LNG is not China’s preferred type of gas.

Converting gas to LNG and shipping it raises the price, and brings geopolitical risk into the picture as ships need to travel through various international and possibly dangerous waters. Just recently insurance premiums of ships travelling in the Gulf region are seeing sharp and sudden price hikes.

China has tried to secure local supply — upping its pipeline gas imports and lifting domestic gas production, but LNG imports to China are still expected to rise by another 30% from ~73 billion cubic meters (bcm) in 2018 to ~95 bcm in 2020, say The Oxford Institute for Energy Studies (OIES).

Of course, a gas pipeline transporting gas through the Gobi Desert has no such risks. This is exactly what Elixir Energy (ASX:EXR) has in mind.

The PSC is just over 400 kilometres from China’s West East Pipeline, meaning it can deliver a low cost local gas supply, and reduce China’s reliance on expensive LNG imports. Avoiding the costs of liquefaction, gas from this area will be highly cost competitive with e.g. similarly produced CBM from Australia that has to be pipelined 400 km to Gladstone, liquefied, shipped to the Chinese coast, re-gasified, then delivered to the domestic Chinese market.

Like China, Rio Tinto (ASX:RIO) is also seeking a reliable — and ideally low emission — energy supply – across its global operations. To power its massive Oyu Tolgoi Copper mine in southern Mongolia the Mongolian government has specified that RIO must secure a local energy source to replace electricity current imported from China.

This is in stark contrast to Rio’s global intention to play a part in supporting clean energy. They seem to have simply acquiesced in order to get the project up and running.

While Elixir’s PSC is not yet in production, neither is the large underground part of Rio’s Oyu Tolgoi. But by the time Oyu Tolgoi is finally fully up and running, the Nomgon IX PSC could well have a ready supply of gas available — assuming all goes to plan. Originally scheduled for early 2021, Rio now says first production could now come between May 2022 and June 2023.

The economic benefits of a gas-fired power plant stack up for Rio too.

Natural gas-fired power plants are much cheaper to build than coal-fired plants. The US Energy Information Administration states that a gas-fired power plant costs roughly a third of a coal fired plant. This is because coal needs all sorts of equipment to transport it, crush it, prep it and collect the ash and dust.

The gas from Elixir’s Nomgon PSC will be low cost itself. Given that its primary customers will be local — in Mongolia (including Oyu Tolgoi), China’s energy grid (gas and electrical), and possibly other Asian nations — Elixir won’t need to convert its gas to liquefied natural gas (LNG).

Gas from Elixir’s Nomgon PSC could be a real option for Rio. A combination of delays to get Oyu Tolgoi up and running, along with RIO’s intention to take a cleaner-energy stance, plus the cheaper price of gas when compared to coal — especially if locally sourced, make Elixir’s gas an attractive option to supply power to the mine.

And locally sourced gas can help the development of local renewables — by “firming up” their supply — an aim that would likely not only be supported by Rio, but also by the regional Governments who are promoting a massive “Asian Super Grid” to help deliver renewables from the Gobi region to as far afield as japan.

Also of interest in the trending Mongolian energy space is Petro Matad (LON:MATD). The company is seeking to deliver a Mongolian oil discovery in the next few months. Its spud must be due fairly soon, at least as is suggested by the company’s share price this year... 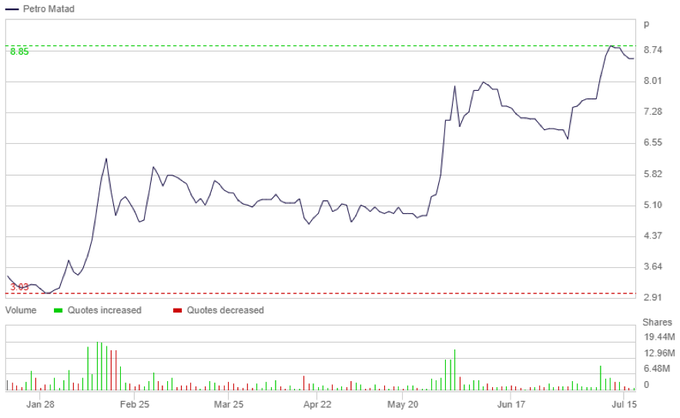 Like that of Petro Matad, Elixir shareholders have done well recently, driving the ASX junior’s share price up as much as 66% in just the last week, to hit 52-week highs. 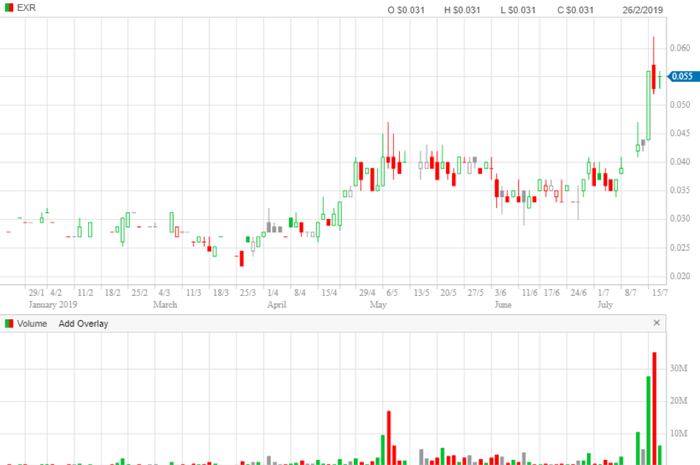 Hot on the heels of receiving final environmental approval to commence its exploration program at the Nomgon IX CBM PSC, Elixir has awarded a tender for its upcoming drilling program.

It awarded the contract to Mongolia’s Erdenesdrilling LLC, and Elixir and the company are now finalising a binding drilling services contract with a view to executing this within the next few weeks — paving the way for the company to commence its exploration program.

The company’s ability to quickly progress the project can be attributed to the extensive executive experience behind the board which includes former managing director of Queensland Gas Company (QGC) Richard Cottee as non-executive chairman.

Cottee steered QGC from a $20 million junior to a $5.7 billion takeover, and he also has a comprehensive knowledge of doing business outside Australia (e.g. in Europe) having injected his vast corporate and operational experience into companies operating in that region.

The spudding of the first well will closely follow the commencement 2D seismic acquisition, which will start in the next few weeks — a much anticipated development, as indicated by the group’s recent share price performance.

Elixir will provide Australian expertise to supervise the drilling and testing of the exploration wells to ensure they meet the highest standards of CBM drilling practices, which have been built up in Australia over thousands of wells in recent decades.

The world class potential of the Elixir’s Nomgon CBM PSC in Mongolia has been independently validated by ERC Equipoise Pte Ltd (ERCE) — one of the largest petroleum Reserves and Resource auditors globally. Reflecting the credibility of ERCE, Carnarvon Petroleum (ASX:CVN) just announced that it too has engaged the international energy expert to independently review its recently discovered Dorado resource located off the North of Western Australia.

If Elixir is able to prove up its ERCE-validated resources, and follow through to production, it has a ready market to serve in China, plus potentially Rio’s Mongolian operations too.