The onshore Montney Formation is the most active oil and gas play in Canada, with over 10 bcfe (billions of cubic feet equivalent)/day of gas production in 2019 and an outlook to increase production to 20 bcfe per day by 2030.

Recent M&A activity in the region has demonstrated that large energy companies have appetite for the Montney and are increasing their positions through consolidations.

The flurry of activity in the Montney has been keenly observed by Calima Energy Ltd (ASX:CE1) – the only ASX listed company with Montney acreage.

Calima currently has a market cap of ~A$18 million, and owns more than 60,000 acres (100% working interest) in a commanding position in the Montney Formation in north-east British Colombia.

Calima’s share price has reacted strongly in recent weeks as the market begins to appreciate the undervalued nature of its Montney land holding, however it still appears undervalued when sized up against Canadian counterparts with Montney acreage.

The company’s core assets, the Calima Lands, lie within the liquids rich gas sweet-spot of the Montney Formation and have a contingent resource of 1.15 tcfe (trillion cubic feet equivalent) and a prospective resource of 2.18 tcfe gas.

The company also owns the Tommy Lakes facilities and infrastructure, which provide Calima with pipeline access to regional, national, and US markets. These assets alone have a replacement value of C$85 million.

Seven years later, giant leaps in completion techniques have improved recoverabilities in the Montney significantly. There continues to be significant activity in unlocking additional resources.

Improved egress, increased demand for condensate to help move heavy oil, the construction of two petrochemical facilities in Alberta, Canada, the construction of a LNG facility (LNG Canada) in BC, Canada and significant production declines in the USA is translating into higher asset values in the Montney, with over 8.2 Bcf/day of projects being underdevelopment.

In August 2020 Canadian Natural Resources (CNRL) announced the acquisition of Montney producer, Painted Pony for C$469 million, of which C$350 million was assigned to Painted Pony’s existing debt. This equates to a valuation metric of ~C$2,500 per developed acre.

Meanwhile in July 2020, ConocoPhillips entered the Montney consolidation race by acquiring a large portion of Kelt Exploration’s Montney position in a C$550 million transaction, equating to a valuation of $2,000 per undeveloped acre.

Kicking off the wave of Montney consolidation was Tourmaline Oil Corp’s acquisition of Polar Star, Chinook Energy and a portion of Painted Pony’s acreage in the northern Montney. These transactions were the most proximal to the Calima position and were valued at $C85 million.

The Calima Lands are development ready with infrastructure capacity of up to 50 million cubic feet of gas per day and 2,500 barrels of oil per day.

As indicated below, the Montney formation covers a large region, and has geological attributes that deliver high flow rate wells. This is a contributing factor for the increasing number of large players competing for acreage in the area.

With regards to Calima’s resource, the company has continued to make significant advancements in recent months, completing a resource reclassification of 249 billion cubic feet of gas and 12.4 million barrels of liquids from ‘development on hold’ to ‘development pending’.

This re-classification allows Calima to convert the ‘development pending’ to bookable reserves upon access to development funding. These permits, plus the Tommy Lakes infrastructure, enable Calima to expeditiously bring these assets into production quickly.

Gas prices have risen substantially over the past six months, with spot prices over C$2.50/gigajoule (GJ) in August supporting M&A activity in the Montney. Forward pricing is holding at higher levels, delivering attractive returns to Montney producers and is a long way from the lows of 2018-2019 being below $1.50/GJ.

Considering the value of Calima’s resource and the recently acquired Tommy Lakes infrastructure, one could argue that the company is either primed for a significant share price rerating or could become the subject of a merger and acquisition transaction. 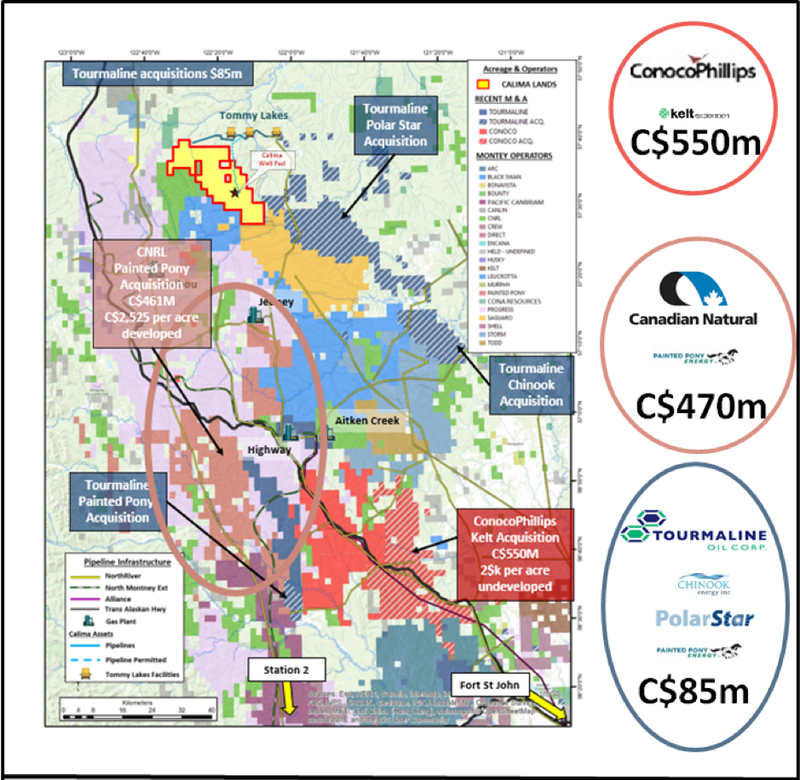 Add together the strategic value of the Tommy Lakes infrastructure with an implied valuation of Calima’s acreage, and Calima shapes up as an attractive acquisition target for a number of Canadian energy players.

It is worth noting that corporate activity within the industry more often than not involves clean takeovers.

As indicated above and in the graph below, corporate activity in the region, as well as an improved industry outlook, has had a very positive impact on the share prices of companies in the Montney region. 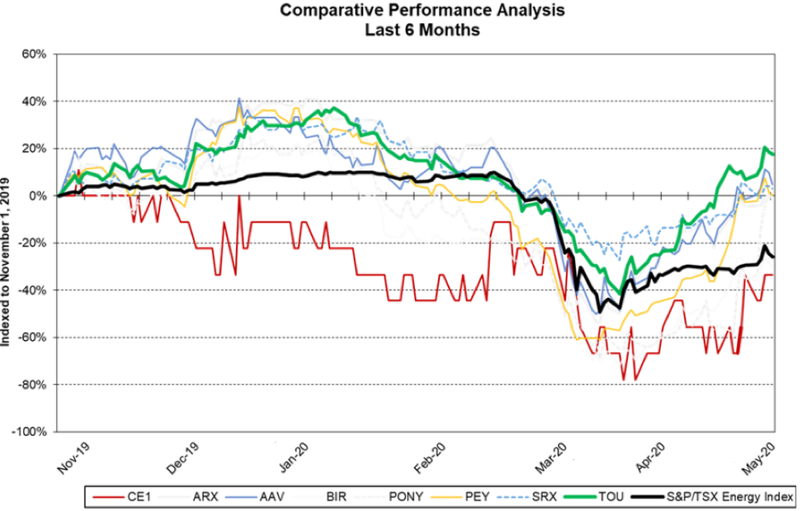 Setting aside the prospect of corporate activity, management’s strategy is to hold the Montney assets within a strict budget ensuring preservation of assets for future production.

As we highlighted above, Calima is the only Australian listed company with Montney acreage, and its valuation has lagged the general industry. Yet, as we know, markets tend to normalise which could result in a rerating of CE1’s share price.

Management will also be pursuing opportunities to add reserves capable of delivering profitable positive EBITDA production. This is ideal timing with the recent strong recovery in Canadian gas prices, along with evidence to suggest this bullish macro environment will only continue into 2021/22.

A shift in momentum for Canadian energy industry

Notwithstanding the prospects of development within Montney or corporate activity, in order to accurately assess the quantum of a potential revaluation one needs to understand the transformational macro environment for the oil and gas industry in Canada.

It would also do well to appreciate the multi-faceted nature of Calima’s operations and its achievements to date, with the latter providing confidence in management’s ability to generate shareholder returns through a range of strategies. 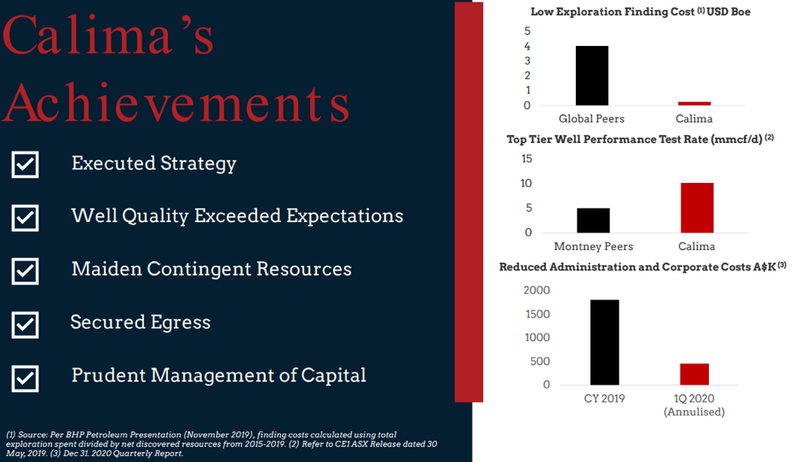 Like any commodity, oil and gas prices are influenced by supply and demand, but there have been external factors placing downward pressure on Canadian oil and gas.

Stepping back to 2018/19, Canadian producers were delivering maximum condensate volumes, resulting in gas oversupply into a constrained system. Since that time, a number of projects have debottlenecked the gas egress from Western Canada.

However, the landscape has shifted and the Canadian market is improving with Canadian gas storage at historically low levels.

Coinciding with this development has been a decline in Permian gas rates in North America, highlighted by the 77% fall in operational drill rigs, which is also a strong leading indicator of near to medium-term production.

This has had a positive impact on pricing in Canada with an approximate 100% year-on-year AECO spot price increase as indicated below – also note that the price is forecast to be above C$2.50 per gigajoule into 2021 and 2022. 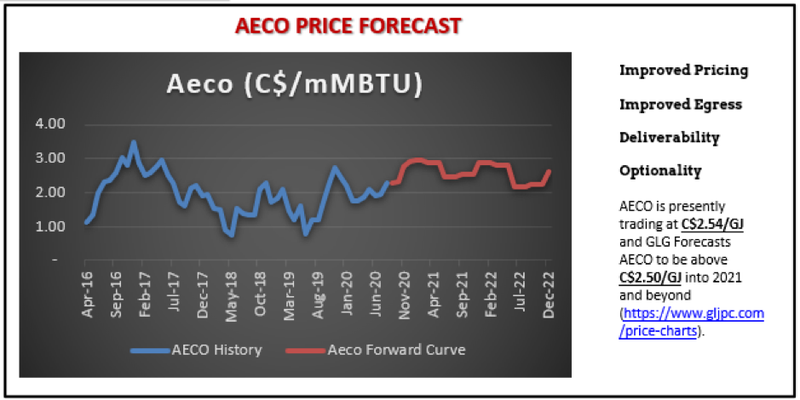 The Alberta government has assisted with the funding and financing of the Keystone XL pipeline operated by TC Energy which will provide additional capacity of 830,000 barrels per day of export capacity.

The Coastal Gaslink Pipeline construction continues on schedule with all federal and provincial government contracts being ratified. The Federal and Provincial governments have executed agreements with First Nations in the region to facilitate the development of the pipeline.

Importantly, new pipeline investment and capacity growth will allow for gas to be directed towards the Shell/Petronas’ LNG Canada Facility via the Canada Coastal Link pipeline and the proposed Woodside/Chevron LNG Facility at Kitimat.

As indicated below, this will provide producers in Calima’s region with access to west coast export markets via existing pipelines connecting with the aforementioned infrastructure. 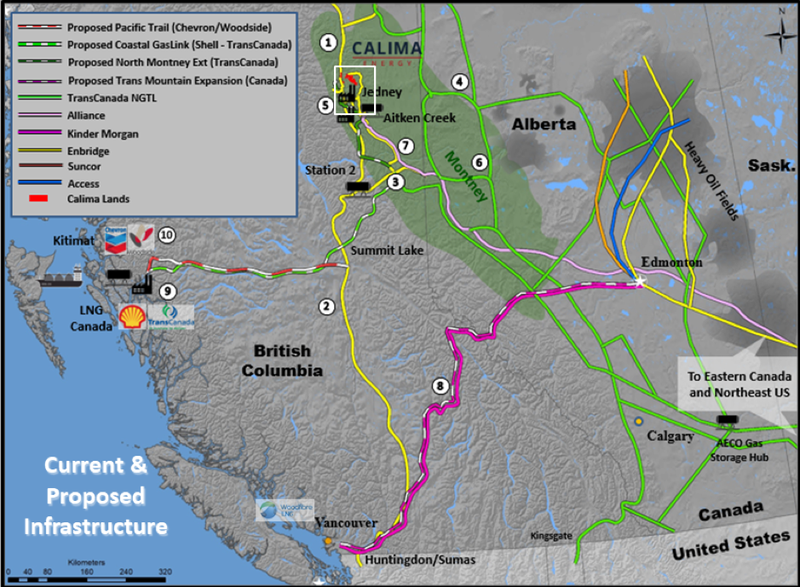 Therein lies the strategic value to Calima as the closest and most cost-effective tie-in point to processing facilities and regional pipeline networks.

This is particularly enhanced by the recent regulatory approval to construct the pipeline that connects the company’s existing wells to the Tommy Lakes Infrastructure.

The Tommy Lakes field connects to a raw (wet) gas pipeline that leads directly to the NorthRiver Jedney processing plant which in turn provides immediate access to the major export routes, NGTL/AECO, Alliance and T-North/Station 2. Based on current capacity, Jedney can receive up to 25 Mmcf/d from the Calima Lands, however the facility has a design capacity of 110Mmcf/d.

The sales gas line to Jedney can handle well-head condensate, however, the company intends to remove most of the condensate at the Tommy Lakes offloading station east of the Sikanni River (approximately 22bbls/Mmcfd).

Additional condensate and other natural gas liquids will then be recovered from further processing at Jedney.

This initiative is fully permitted and management expects that the facilities are capable of being restarted in the timeline required to construct the tie-in pipeline to the Montney wells (one winter season).

Calima has converted a significant portion of its Montney acreage into 10-year leases expiring in 2029. The company earned the right to make this conversion based on the total metres drilled during its successful 2019 three-well drilling campaign. The British Columbia Department of Energy, Mines and Petroleum Resources has granted the conversion of 49 sections of land covering 33,643 acres, representing 56% of Calima’s Core Lands.

It is worth noting that there is no obligation to drill any further wells to hold the Leases until 2029.

The remainder of the Calima Lands are held under 5-year drilling licences which require drilling to enable further conversions to be made. Most of the remaining licences mature by the end of 2022.

This makes Calima even more attractive to a potential suitor as there is security of tenure for another nine years.

Crunching the numbers relative to the value of its acreage and vital infrastructure is the key to attributing an appropriate valuation.