However, the near-term focus is on the group’s Surat Basin interests, and on this note Real Energy is merging with joint venture partner Strata X, renaming the entity as Pure Energy, which will then transition to 100% ownership of Project Venus. 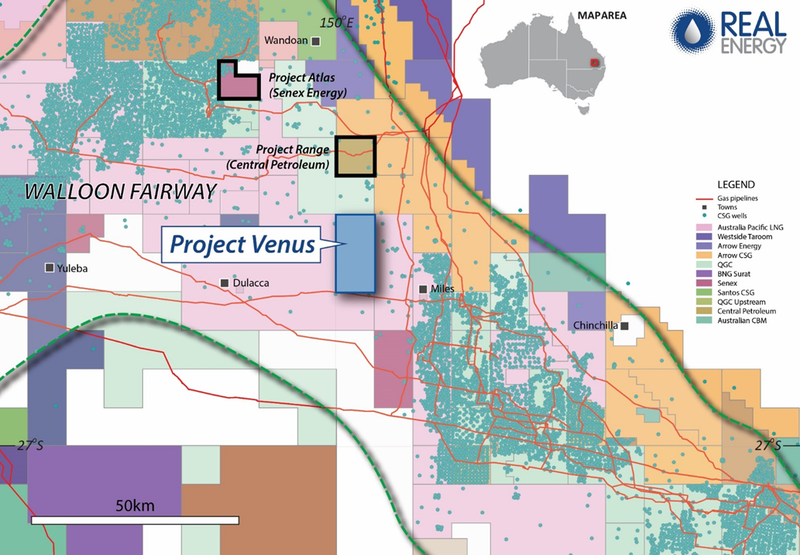 Commenting on the group’s strategy at Venus which incorporates the drilling of a new CSG well rather than opting to re-enter the Connor-1 well, Brown said, ‘’We think both Connor-1 and Venus-1 were good wells to consider and the Venus Project has considerable near-term upside having 694 pj of Prospective Resource.

‘’We believe with some success on this well we can deliver a meaningful Contingent Resource in the short term.

‘’While we determined Connor-1 was a good prospect there were some risks, indicating it was cleaner just to drill a fresh new well, potentially offering better upside value for not significantly more investment.’’

Brown discussed developments in the broader area, highlighting that Venus is located on the north-eastern part of the permit where the landowner said that Origin or APLNG is planning to drill just to the east on the same property.

On this note, Brown said, ‘’They obviously see what we see - tremendous upside and a coal seam that runs all the way through the Walloon fairway where there's thousands of wells that have been drilled and most of those are in production surrounded by major companies including QGC, Arrow and APLNG.

If Venus-1 is successful, the company will use it as a pilot that would ultimately be rolled out.

The group would then drill another two wells to provide sufficient information to release a certified reserves estimate.

This would be a forerunner to signing a gas sales agreement ahead of moving to commercial production.

Using Senex Energy’s Project Atlas as an analogy, Brown said, ‘’With Project Atlas, Senex brought it into production after about two years of development, and this included construction of a pipeline and gas plant.

‘’Now they’re producing and making pretty good cash flow, which could be used as a template in relation to our strategy.’’

Management has been running the numbers on Project Saturn near Miles and Project Jupiter which is close to Gladstone, both of which are situated in Queensland.

In relation to this initiative Brown said, ‘’We're looking at large-scale hydrogen plants at both locations.

‘’At this stage, Saturn would look to utilise gas not only from our own gas field, but we would look for gas from other projects in the area and utilise that to manufacture hydrogen which we believe there will be a market for locally.’’

‘’At Project Jupiter, we're looking primarily at making hydrogen from water so the company's been in discussions with potential off-takers and suppliers in the region.

‘’The initial economics of the projects have been very positive and concept studies are going to continue and we're hoping to complete it by the end of the calendar year so we'll have more to say in due course.’’