BPH Energy Ltd (ASX:BPH) has provided a report on the geochemical support for the planned exploration well within PEP11, in the offshore Sydney Basin.

This follows a comprehensive update provided by the group last Monday.

PEP11 is held 85% and operated by Asset Energy Pty Ltd.

This most recent report discussed historical exploration activity and its implications for the group’s planned initiatives once it receives the green light to move ahead with its own exploration program.

The geochemical report reviewed the hydrocarbon analysis performed on sediment samples obtained within PEP11 during 2010.

Sediment samples were recovered from a number of sites at potential drilling targets.

The geochemical investigation utilised a proprietary commercial hydrocarbon adsorption and laboratory analysis technique to assess the levels of naturally occurring hydrocarbons in the seabed sediment samples.

The following data from this analysis is shown below, and the report supports that the area surrounding the proposed drilling site on the Baleen Prospect appears best for hydrocarbon influence relative to the background samples. 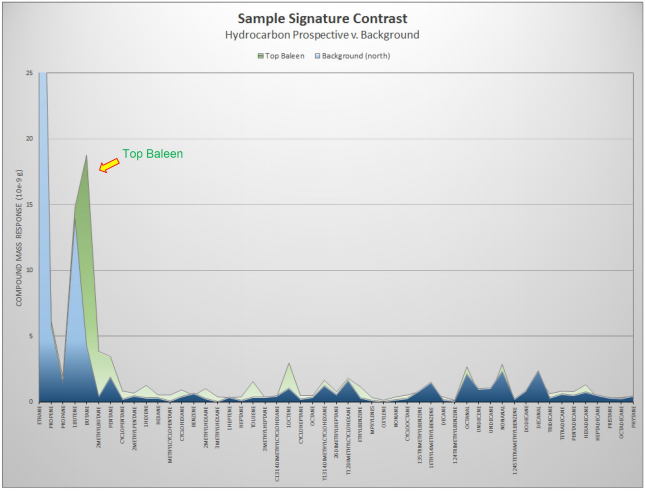 In summation, the geochemical data acquired in 2010 supports the identification of reliable backgrounds and also primary hydrocarbon influence locations, despite active gas seeps that appear ubiquitous throughout the area of interest.

The Baleen Prospect appears to hold a higher probability of success than other prospects.

Citing an independent report (The Leading Edge), BPH is buoyed by its comments which in part say ‘’A recent review of more than 850 wildcat wells – all drilled after geochemical surveys – finds that 79% of wells drilled in positive anomalies resulted in commercial oil and gas discoveries.”