There have been two promising developments at 88 Energy Limited (ASX:88E; AIM:88E) in the last few days as the company kicked off the week with an update related to the farm-out at its Project Peregrine, on the North Slope of Alaska.

More on that later because yesterday’s release of an independent prospective resource for prospects in the vicinity of the recently drilled Charlie-1 well was particularly well received, with the company’s shares surging 16% under the second-highest daily volumes recorded in the last five years.

This wasn’t surprising as the resource estimate was roughly nine times the internal estimates previously established by management.

Most importantly, the data prepared by ERCE Equipoise Pte Ltd (ERCE) indicate that the majority of the resource has been estimated within the Seabee formation, which has been interpreted as part of one large stratigraphic accumulation over multiple, potentially connected, sand bodies in the Lima Fan System.

Excellent oil saturations were observed in cores taken from this horizon during the drilling of Charlie-1.

The following table highlights the prospective resource estimates which has can be seen are extremely large at the Lima Fan reservoir with a mean estimate of 888.6 million barrels of oil equivalent. 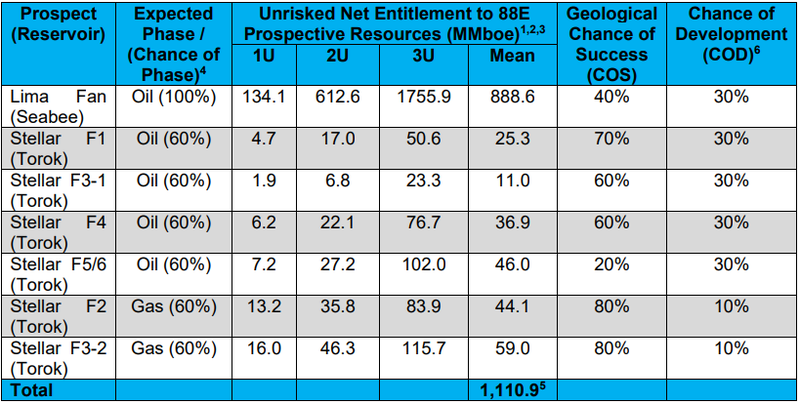 80% chance of success in some reservoirs

While the other reservoirs haven’t been estimated to hold such high volumes, the chances of success (COS) are highly promising particularly with Stellar F2 and Stellar F3-2.

These two reservoirs have a combined mean prospective resource of 103.1 million barrels of oil equivalent with a high chance of success of 80%.

There was no flow test at this horizon in Charlie-1 and, consequently, reservoir deliverability remains to be established.

However, given the significant size of the estimated resource, 88 Energy is confident that it will be able to attract a partner to fund drilling of additional wells to evaluate the flow potential in the Seabee.

The company is also optimistic about the potential for light oil in the Torok, which could enhance value substantially.

Underlining the substantially higher volumes compared with the company’s previous internal estimates, managing director of 88 Energy Dave Wall said, "The net potential to 88E in the Lima Fan System was estimated internally by 88E at around 100 million barrels prior to the drilling of Charlie-1.

‘’With this large independent upgrade and the recent increase in working interest in the leases, this potential has now improved to almost 900 million barrels net to 88E - an outstanding result for our shareholders.

‘’Resources of this size are why we are operating in Alaska and we are on the cusp of drilling at another similarly sized opportunity at one of our other projects, Project Peregrine.”

This brings us back to the news released on Monday when 88 Energy announced that the farm-out process at Project Peregrine had progressed to the final phase, being subject only to finalisation of standard documentation as the preferred bidder had been selected.

Strong interest was shown in the opportunity and the bids received were competitive.

Execution of the final documents is expected in the next few weeks, at which point more detail on the transaction will be made public.

Planning and permitting remains on schedule for a late February 2021 spud of the first well at Project Peregrine.

Commenting on the significance of the keen interest in Project Peregrine, Wall said, "The strong interest shown in the imminent drilling program at Project Peregrine is both a testament to the quality of the opportunity and the hard work done by the 88E team over the last few months.

‘’We look forward to working with the preferred bidder to close the transaction and get going on the drill program.”