AusQuest Limited (ASX:AQD) has commenced testing several compelling gold-copper targets at the Gunanya Project in the Paterson region of Western Australia under its Strategic Alliance Agreement with South32.

The Gunanya Gold-Copper Project is located about 250 kilometres north-east of Newman within the Paterson Province of Western Australia.

The Reverse Circulation (RC) drilling program will consist of 6 to 9 drill-holes for a total of approximately 1,800 metres, providing an initial test of three magnetic targets to determine their potential to host large-scale gold and copper mineralisation, similar to that found at Winu (Rio Tinto) and Havieron (Newcrest).

The drilling program should take approximately two to three weeks to complete.

Drill-holes will be spaced 200 metres apart and drilled to depths of about 200 metres, with at least two holes planned to test each of the three targets.

Results from drill samples should be available approximately four weeks after completion of the drilling program.

Commenting on the significance of this drilling program, AusQuest managing director Graeme Drew said, “These are compelling targets based on analogies that we have been able to draw with new discoveries in the Paterson Region from both a gold and a copper perspective.’’

The following map shows the location of Gunanya relative to Winu, Havieron, Telfer and Nifty. 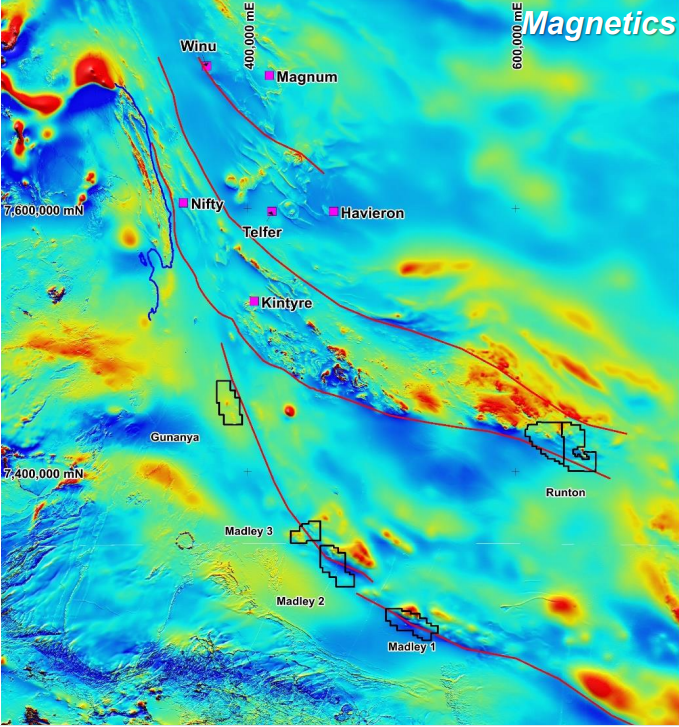 Investors flock to Ausquest ahead of much anticipated drilling campaign

Ausquest is a prime example of investors piling into a stock in the expectation that drilling results could be market moving.

Just this morning, shares in the group traded as high as 3.1 cents, representing an increase of more than 10% relative to last Friday’s closing price

The company informed the market in July that drilling had been approved for its Gunanya project, outlining the highly prospective nature of the region where Rio Tinto and Newcrest have both had success.

Since July the company’s shares have more than doubled, and it looks like there is more to come, particularly with the gold price hovering in the vicinity of $2700 in Australian dollar terms.

The copper price is also looking strong, having consolidated above US$3.00 per pound in recent months.

It is worth noting that blue-chip mining group South32 (ASX: S32) is funding exploration work at Gunanya

These recent exploration breakthroughs have significantly enhanced the gold and copper profile of the Paterson Province, which already hosts the large gold and copper deposits at Telfer (Newcrest) and Nifty (ASX:MLX), and is widely regarded as one of Australia’s current exploration “hot spots” with activity levels continuing to ramp up.