In what American Patriot Oil and Gas’s (ASX:AOW) Chief Executive Alexis Clark described as a transformational step change, the company announced on Thursday that it had signed a new Letter of Intent (LOI) to acquire additional conventional oil and gas assets in East Texas. These assets consist of 37 barrels of oil a day and 440 mcfd of gas production (110 barrels of oil equivalent per day) with significant upside potential.

The asset contains 1.1 million barrels of oil equivalent proven oil and gas 1P reserves certified by independent reserve reports. These reserves have been acquired for US$2.5 million and are estimated to have the potential to generate USD$20 million revenue over a period of time.

Management said the reserve study had been conservatively valued at US$50/bbl oil prices at a time when the market price is US$55/bbl. The assets have been acquired from a number of private oil and gas companies.

As shown below, the East Texas fields acquired in this transaction are located in Harrison, Gregg, Rusk and Upshur Counties, Texas. 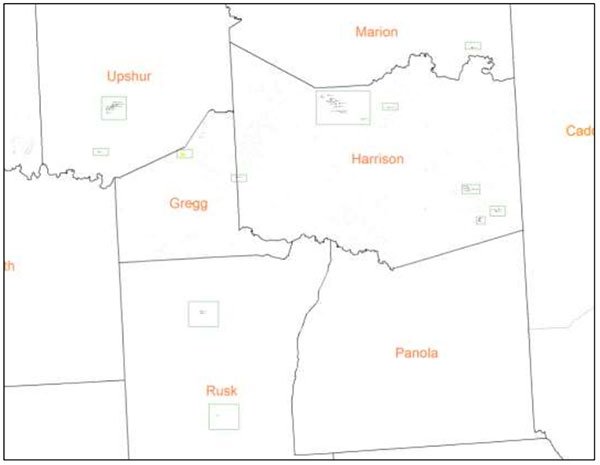 Management noted that there are significant proven behind pipe pay and infill drilling opportunities that have not yet been exploited, indicating the prospect of growing production significantly for minimal capital expenditure.

There are over 38 producing wells over 43 leases with an average net revenue interest (NRI) of 76 per cent. Estimated reserves are 400,000 bbls oil and 4 bcf gas.

AOW has already completed an independent reserve report and full engineering study on the assets with further due diligence including land title and environmental work currently being undertaken.

The transaction is scheduled to close in early December. Management noted that costs in this region are approximately US$23/bbl, indicating the wells are economic down to a low oil price, and at current prices deliver substantial margins.

Furthermore, all the existing operating infrastructure is in place and there is ready access to market through gas pipelines and delivery to nearby refineries. The asset requires minimal workover expenditure to increase the production in the field.

Combined with the other assets recently acquired by AOW, the company is set to achieve production of 500 boepd by the end of 2017 with 2 million barrels of proven oil and gas reserves certified by independent reserve reports.

Management expects that these assets will generate revenues of more than US$50 million at current oil and gas prices over a period of time.

The assets are being acquired using funding from the facility provided by a prominent US based funder who has already successfully completed engineering due diligence on this asset and AOW’s other assets.

The lender’s independent Reserve Auditor is completing additional due diligence including land title and environmental reviews on all assets, which should see the transaction formalised within the next 40 days.

Substantial impact on reserve base and production with more to come

Highlighting the significance of this transaction in terms of transforming AOW into a prominent production company, Chief Executive, Alexis Clark said, “In our largest transaction to date we have now doubled our reserve base and production potential in one transaction which underpins the cash flow of the business, and we are continuing to find attractive distressed conventional assets in the current market with significant upside potential.”

Importantly, Clark highlighted the fact that the company was currently completing due diligence on assets which are more than five times the size of the current deal, some of which are expected to close in early 2018. AOW has demonstrated its ability to astutely identify new prospects with this being its fourth acquisition.

Management’s aim is to aggressively build a conventional oil business, producing well over 1000 barrels of oil per day in 2018. Central to this strategy will be an expansion in the group’s reserve base.