The company is targeting gas supply to the premium local Californian gas market and the burgeoning LNG market in North America.

The acquisition, which has been funded from existing cash, has been in the works since last January and the assets, known as the ‘Alberta Plains Assets’ consist of oil and gas fields and associated production equipment, located between Edmonton and the USA border as seen in the map below: 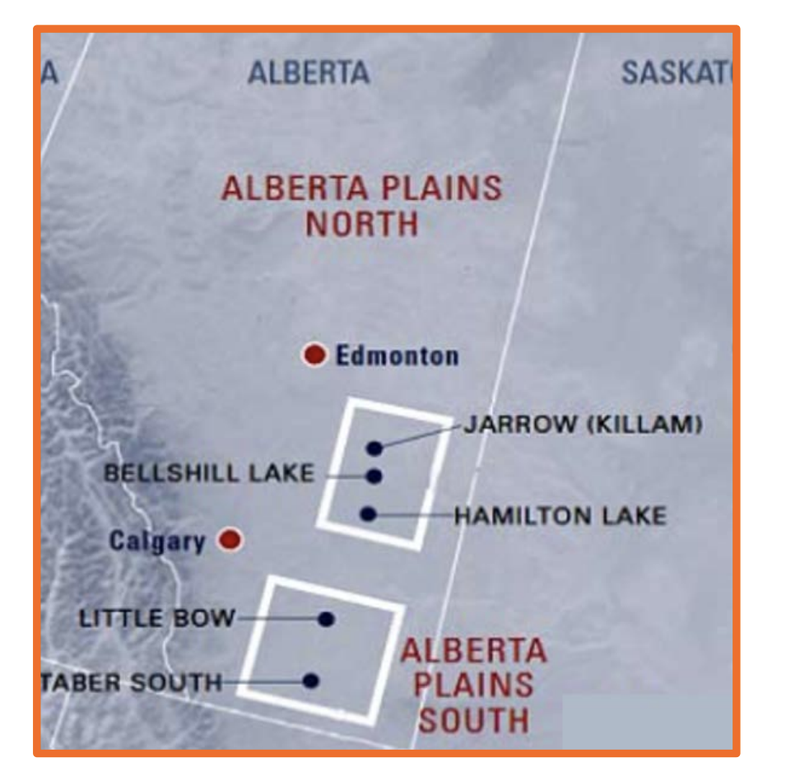 The purchase price is equivalent to around US$0.64 per Barrel of Proved Plus Probable Oil Reserves, with a purchase price metric of ~US$5,000 per flowing BOPD following initial reactivation.

The principal crude oil and gas properties are located in the Little Bow, Taber and Bellshill areas and current production is around 100 BOPD.

Work on selected wells is currently being undertaken to bring them back into production at an expected gross (100%) rate of 500 BOPD before the end of February.

The majority of the oil and gas wells being acquired have been in production for many years, with the average production over the last five years, before the Asset wells were shut-in during 2020 due to COVID-19 related low oil prices, was over 2,000 BOEPD.

Gross (100%) and implied Net to SGC Remaining Reserves (Both Reserves are Net Reserves after oil and gas lease royalty has been deducted) estimated on a Deterministic Basis. Reserves of 5 million BOE were estimated by the Independent Evaluator at 31 December 2019. This gives a Purchase price metric of ~US$0.64 per BOE of 2P Reserves.

The Independent Evaluator’s report is as follows:

The acquisition is an astute move by Sacgasco as, at current prices, the Assets are cash flow positive and are highly leveraged to increased oil prices.

Gross leased acreage is approximately 29,000 acres and 3D Seismic covers all of the producing acreage at Taber, Bellshill and Little Bow Fields.

“Sacgasco is very pleased with the rapid progress in our strategy of acquiring opportunities in underexplored and undervalued assets supported by invaluable infrastructure and facilities,” Sacgasco’s Managing Director, Gary Jeffery said.

“We look forward to working closely with our trusted and proven Operator Blue Sky in Alberta. The acquisitions we are making are the foundations for a solid oil producing business in Canada. The recent strength in the oil prices, up over 40% since we initiated the first agreement to acquire oil assets, with every indication that this will continue, places Sacgasco in an enviable position to benefit from our Operator’s ability to significantly enhance current production levels. The assets are non-operated and will allow Sacgasco to focus on its operated assets in the Sacramento Basin, especially the imminent spudding of the Borba Prospect well.”

The Alberta Plains acquisition follows the acquisition of a 30% working interest in the 1000 barrels of oil per day (bopd) Red Earth asset, consisting of six oil fields and associated infrastructure in Alberta, Canada.

Further to its latest acquisition, Sacgasco is on track for spudding the Borba 1-7 well in the Sacramento Basin in early February.

The well is planned to be drilled directionally to Basement to intersect multiple stacked, 3D-seismic amplitudes which are interpreted to be indicative of Natural Gas accumulations in conventional sandstone reservoirs.

Sacgasco’s management team has already demonstrated their ability to identify high-quality targets, bringing them into production at commercially viable costs. However, they are waiting for the one ‘big one’ which means that exploration success at Borba should be a prominent catalyst.

SGC-owned meter stations already connected to open access gas pipelines are in close proximity, and other pipelines connections are within two miles of the Borba location. Consequently, a gas strike may provide immediate share price traction given that it can immediately be sold on the open market.

As the company drills a range of reservoirs, conducts testing and arrives at a resource estimate, further share price momentum could occur.

Looking at the big picture, there is high demand for in-state gas production in California, evidenced by resilient gas pricing despite a fall in global oil prices - like any commodity, a continuation of robust prices should provide share price support.