88 Energy (ASX:88E, LON:88E) continues to surprise market analysts and geologists as it continues its exploration work in onshore Alaska.

Operating its flagship Icewine Project, 88E updated its shareholders saying that “additional analysis obtained from Icewine#1 has confirmed outstanding permeability in two previously unmeasured core samples”. Furthermore, 88E says that its samples “had readings too high to be measured using the traditional method for estimating permeability”, and have therefore been “measured using pulse decay permeability analysis” instead.

Commenting on the announcement, 88E Managing Director Dave Wall said, ”As expected, the permeability results from the ‘super highways’ are excellent and provide further support for resource play that could yield production rates more akin to those normally experienced in conventional wells. An increasing body of evidence from Icewine#1 supports the case for potentially exceptional flow rates from the HRZ. The next step is to test this theory via the drilling of Icewine#2H, which will be a horizontal well with multi-stage fracture stimulation.

“Our 2D seismic program has also commenced on schedule and we look forward to its successful completion over the coming weeks, which will both de-risk drilling for Icewine#2H, but also, potentially identify conventional prospects across the Project Icewine acreage.”

With constant fluctuations in share price, investors should proceed with caution.

In November 2014, 88E entered into a binding agreement with Burgundy Xploration (ASX:BEX) to acquire a 87.5% working interest in Project Icewine onshore Alaska in North America. In November 2015, the gross acreage position was expanded by 174,240 acres. Subject to final payment on the expanded acreage, 88E will possess a 212,489 acre position.

At the time, 88E identified three highly prospective play types that are likely to exist on the Project Icewine acreage – two conventional and one unconventional. 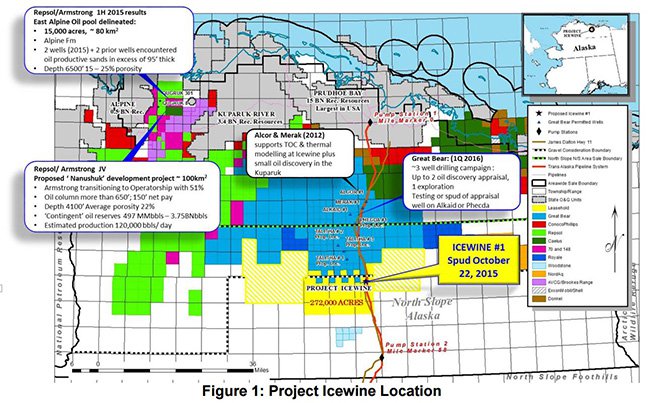 The HRZ liquids-rich resource play has been successfully evaluated based on core obtained in the recently completed (December 2015) Icewine #1 exploration well, marking the completion of Phase 1 of Project Icewine. 88E says that Phase 2 has now commenced with planning for Icewine#2H – a horizontal well – now underway.

With strong exploration results continuing to support 88E’s development, the next steps are squarely focused on its Icewine #2H well where 88E is busy refining the well’s frac design and other logistics in preparation for production. Current or imminent activities at Icewine #2H include proppant embedment measurement, fluid sensitivity determination and borehole stability tests.

88 Energy says that results from this analysis will be received over the next few weeks which could act as a further catalyst for its share price.

In other news, 88 Energy is carrying out a 2D seismic program across the entire Icewine project site with 15% already completed. The Company plans to progress drilling and seismic acquisition in the near term to take advantage of the globally unique fiscal system in Alaska, which allows for up to 85% of CY2015 exploration expenditure to be rebated in cash.