Acquisition by Oil Search could have implications for 88 Energy

A significant development announced on Wednesday by oil and gas explorer and producer Oil Search (ASX:OSH) could spark some interest in junior explorer, 88 Energy (ASX | LSE: 88E), as the group holds Alaska North Slope acreage in areas approximate to those acquired by OSH.

Firstly, it is important to gain an understanding of the assets acquired by Oil Search, as well as management’s rationale for targeting that region. The company signed an agreement to acquire a number of oil assets in the Alaska North Slope from privately-owned companies Armstrong Energy LLC and GMT Exploration Company LLC.

The assets include a 25.5 per cent interest in the Pikka Unit and adjacent exploration acreage and a 37.5 per cent interest in the Horseshoe Block, the locations of which are illustrated below. These leases contain approximately 500 million barrels (gross) in the Nanushuk and satellite oil fields, with Nanushuk being one of the largest conventional oil fields discovered in the US in more than 30 years. 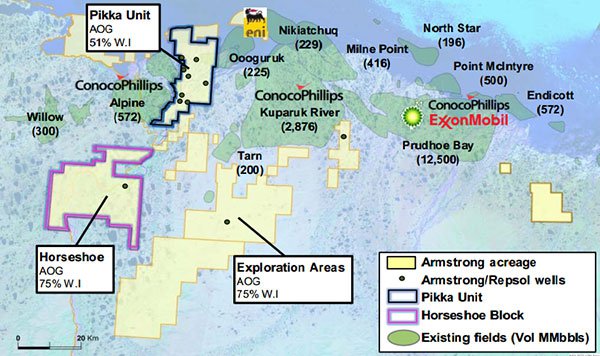 The Nanushuk field, which is located adjacent to several giant producing oil fields, was discovered in 2013. To date, 19 exploration and appraisal wells have been drilled on the field, which, combined with full coverage of 3D seismic data, have delineated a giant oil resource.

Oil Search expects that the initial development will target 500 million barrels of oil in the Pikka Unit, with first production anticipated in 2023 and plateau production rates in a range between 80,000 barrels and 120,000 barrels per day (gross).

As a backdrop, 88 Energy entered into a binding agreement with Burgundy Xploration in November 2014 to acquire a significant working interest in a large acreage position on a multiple objective, liquids rich exploration opportunity onshore Alaska, North America, referred to as Project Icewine.

It was only last week that management announced it had increased its acreage position in that area to circa 458,000 acres (286,000 acres nett to 88E).

It should be noted though that 88E remains a speculative stock and investors should seek professional financial advice if considering this stock for their portfolio.

The location of the acreage relative to that acquired by OSH is illustrated below. 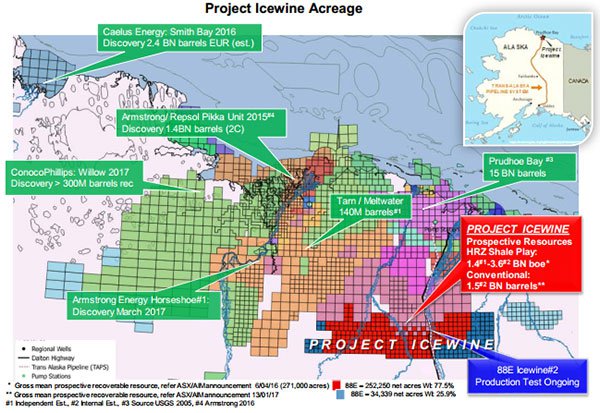 The emergence of merger and acquisition activity will no doubt be welcomed by 88E’s shareholders as it could come under scrutiny from like-minded suitors at an ideal time in the cycle when oil and gas prices are in the early stages of recovery.