88 Energy (ASX:) announced on Monday that the company had completed wireline logging at its Icewine#2 project, located onshore North Slope of Alaska.

Management described the data quality as excellent, importantly complementing the core and logs retrieved at Icewine#1, which it hopes can be replicated from a production perspective.

Having achieved a positive outcome with wireline logging, the enhanced data suite will ensure optimal design of the planned stimulation program.

There was a hitch with the cementing of the 4.5 inch production liner, as hole conditions in the Pebble Shale Unit (beneath the HRZ production interval) prevented successful completion. However, management assured that this was a minor setback and had not altered the schedule for production testing, particularly given 88E is ahead of schedule on the project.

Bradley anticipates success would likely be sufficient to attract a major farm-in partner which would support the current valuation.

Despite recent weakness in the oil price and a lull in activity leading up to the drilling of Icewine#2, 88E has traded strongly in the last six months with its share price increasing 25% from 3.7 cents to an intraday high of 5 cents in early May.

It should be noted that broker projections and price targets as seen below are only estimates and may not be met. Also, share trading patterns should not be used as the basis for an investment as they may or may not be replicated. Those considering this stock should seek independent financial advice.

As can be seen in the following chart, 88E has substantially outperformed relative to the Nymex Oil (light sweet crude) price movements over the last six months. 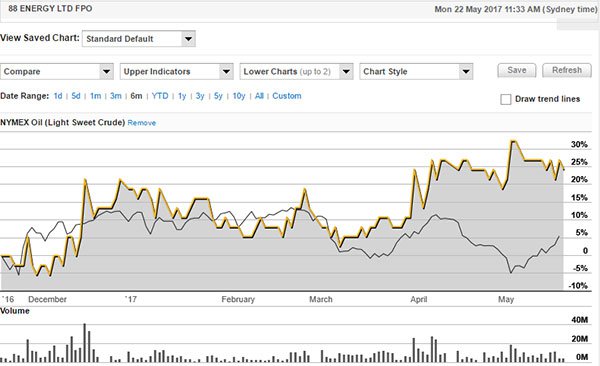 The fact that 88E has been able to hold around early May levels despite the subsequent downturn in the oil price suggests that investors are confident that Icewine#2 will deliver.

Bradley has a valuation of 7 cents on the stock, implying upside of 50% relative to Monday morning’s opening price of 4.7 cents.