88E prepares for stimulation at Icewine

Shares in 88 Energy (ASX:88E) have spiked nearly 40% since the start of June, increasing from 5 cents to hit a high of 6.8 cents on Tuesday morning. The most recent rerating occurred under extremely high volumes, suggesting there may be some smart money behind the move as the company prepares to perform the stimulation at Project Icewine test on June 17.

This is also the highest level the company’s shares have traded at since September 2016 when they hit an intraday high of 6.2 cents. Hence, there could be some interest from technical analysts.

Icewine is located onshore North Slope of Alaska, and the company has successfully completed the drilling campaign, as well as the stimulation design.

Perhaps giving investors further confidence was the fact that insights have been gained into the stress profile and pore pressure of the HRZ, which appears higher than previously expected. Management highlighted last week that this can have a direct effect on potentially higher flow rates.

This commentary appeared to contribute to the rerating as the company’s shares increased more than 10% from 5.3 cents on the previous day to close at 6 cents. This was under particularly high volumes in excess of 20 million shares, and on the following day 88E hit 6.5 cents with 37 million shares traded, the second highest volumes in the last six months.

By 2.30 PM on Tuesday nearly 40 million shares had been traded, suggesting the six-month record for the most shares traded in a day (41.5 million) set in December 2016 could be eclipsed. The intraday high of 6.8 cents represented an increase of 17.5% compared with the previous day’s close. 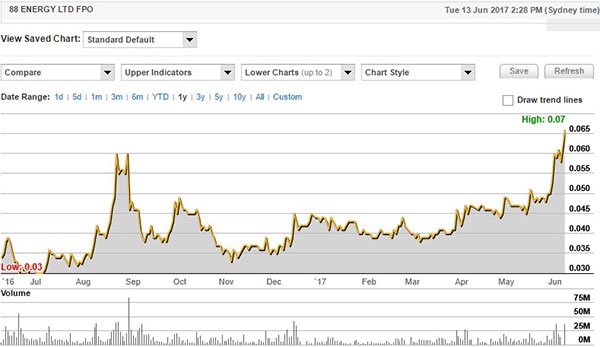 Not only is the stimulation procedure on track for commencement towards the end of this week/early next week, but production testing is also imminent with management forecasting late June/early July.

There are a number of variables in play that could result in the project being the catalyst for a significant rerating.

The next phase of the program will comprise the planned artificial stimulation and production testing which should resolve a number of current uncertainties, including whether complex artificial fracture systems can be created within the HRZ by the proposed stimulation.

Similarly, while substantial work has been done on thermal maturity, the exact gas/oil ratio is difficult to predict prior to flow test, and this also has the potential to impact the value of the asset.

However, 88E appears to have all bases covered with management recently saying, “The company interprets that the vast majority of the HRZ sweet spot has been captured irrespective of any uncertainty due to the large acreage position”.