Alaskan oil and gas explorer 88 Energy Ltd (ASX | AIM: 88E) has negotiated an important farmout agreement in relation to its Project Peregrine asset located in the NPR-A region of the North Slope of Alaska.

This is a significant milestone for the group as a sharing of exploration costs for the upcoming drilling campaign was an integral part of the development program.

It is also encouraging to note that the company has attracted such a high profile industry participant in Alaska Peregrine Development Corporation LLC (APDC).

All additional costs associated with the project above the US$10 million carry will be borne equally by APDC and 88 Energy.

Of course, only 50% of the cost will be borne by 88E due to the farmout agreement which means its contribution will be limited to US$1.3 million

Management’s ability to fast track such an advantageous collaborative arrangement will be appreciated by shareholders who will be eagerly awaiting the much-anticipated spud of Merlin-1 in February. 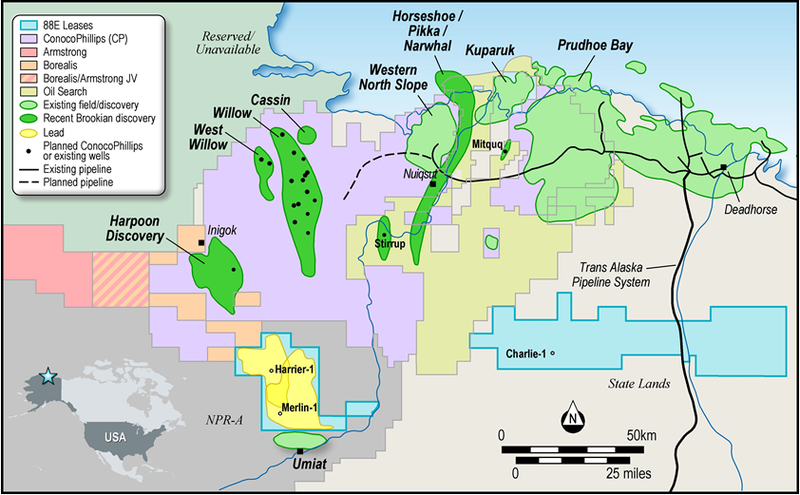 Commenting on these developments, managing director Dave Wall said, "Being able to secure a farmout deal with a high calibre partner on close to two for one deal terms in the current oil and gas environment is a major coup for our shareholders. This is especially true given the short time period in which it has been achieved as we only acquired Project Peregrine in July of this year.

‘’APDC is a close cultural fit for our proposed future plans for Project Peregrine and it has been a pleasure to work with them to finalise the farmout deal within a tight timeframe.

‘’We look forward to potential success as we approach the imminent spud of Merlin-1 in February 2021.”

The company has found strong support in the December quarter with its shares gaining 60% in September, and continuing to trade about 40% above September quarter levels.

This news could well provide further momentum with significant near-term catalysts such as the spud of Merlin-1 and subsequent drilling results having the potential to drive a substantial rerating, particularly if the oil price continues to recover.