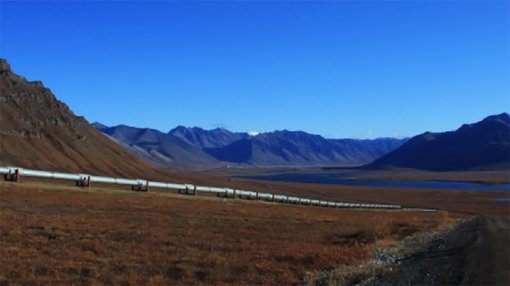 88 Energy Ltd (ASX:88E, AIM:88E) has identified an existing gravel pad which could be used as a drill location on its Project Icewine, located on the North Slope in Alaska.

The identification of this site, which already has infrastructure and advanced approvals, gives 88E the option of drilling a well in late 2015, six months ahead of its expected schedule.

The move comes as 88E’s neighbour on the North Slope, Great Bear, begun drilling the first of up to three exploration wells targeting a conventional play in an oil trend likely on 88E’s Project Icewine acreage in February.

This drilling event has been long anticipated by 88E, whose boundary is just four miles from one of Great Bear’s wells.

A successful drilling programme by Great Bear is anticipated to impact positively on Project Icewine, and could help identify conventional drilling targets for 88E along any oil trends overlapping the shared boundary.

At the same time that this drilling activity accelerates, the financial conditions for oil development on Alaska’s North Slope continue to remain attractive, despite falling global oil prices.

The Alaskan government is seeking approval for a state budget that includes $700M of cash rebates for energy exploration with up to 85% of costs up for reimbursement. Plus local contractors are cutting their prices to secure work during the oil price downturn.

With a possible drilling event in late 2015, 88E has also just shored up its own financial position, raising $7M in an oversubscribed share placement to finalise Project Icewine’s acquisition.

88E is the former Tangiers Petroleum, whose TAO-1 well offshore Morocco was unsuccessful in 2014.

Since then, Managing Director Dave Wall has refocussed the company on Alaska’s prolific oil producing region, the North Slope, through the acquisition of Project Icewine.

The project was identified by 88E’s US partner who spearheaded ConocoPhillips early move into the Eagle Ford shale in Texas, and led them to acquiring approximately 320,000 acres in the sweet spot of the play for low prices.

88E believes the ‘HRZ Shale’ at Project Icewine has the potential to establish Alaska’s next large oil resource. These sources rocks are part of the same system that feeds the 15 billion recoverable resource Prudhoe Bay oil field.

These figures are potentially conservative as they assumed that just 44% of the project’s acreage may be productive for unconventional resources with only a 6% recovery factor. Some areas of the Eagle Ford are achieving as high as 15% recovery from the shale so there is room for upside in the numbers if the forward program is successful.

Armed with this information, 88E has moved to acquire 87.5% of the project, and operatorship, and has recently changed its name to reflect this new direction.

Project Icewine is surrounded by prospective ground being developed by major oil producers and explorers.

Repsol is drilling the first of three planned wells right now at its 500,000 plus acres to the north-west, there’s the 100 million barrel Tarn Oil Field, the six billion barrel Kaparuk Oil Field and of course the Prudhoe Bay Oil field with its 15 billion barrel recoverable resource.

And 88E’s immediate neighbour, the privately owned oil explorer Great Bear, is drilling the first of three planned wells at its 500,000 acreage with the help of oil services giant Halliburton. 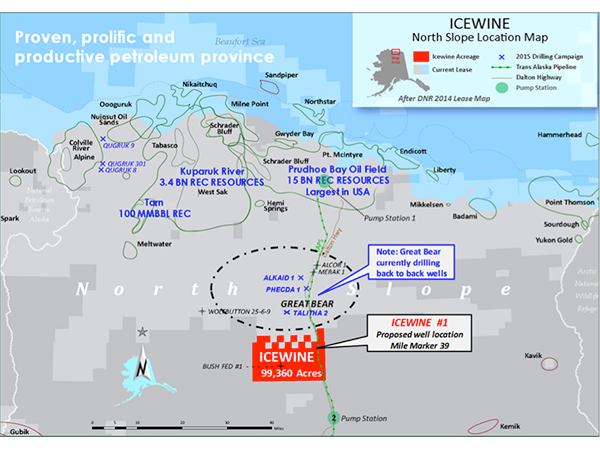 Great Bear’s three wells – Alkaid-1, Phecda-1 and Talitha-2 – will explore both conventional and unconventional oil targets. Talitha-2 is just four miles from the Project Icewine boundary and is targeting one the conventional plays that 88E is going after.

Great Bear’s Alkaid-1 conventional well is being drilled now, and could be completed very soon, and then the Talitha-2 will be spudded, which is understood to be testing both conventional and unconventional potential.

It’s unlikely that the results of Great Bear’s drilling will be announced until all the wells have been completed, and it’s anticipated that the work will be done by late May at the earliest.

88E is watching the progress of its neighbor closely, knowing that any successful drilling event could impact positively on Project Icewine.

Great Bear’s drilling could reveal large conventional resources in the area, and help identify oil trends that extend on to 88E’s acreage, sparking increased market interest in the area as well as helping to attract farm-in partners for when 88E starts its own drilling.

A gravel pad that was originally used a staging area for construction of the Trans Alaskan Pipeline in the 1970s provides an ideal location for 88E’s first well.

Initial analysis suggests that fast tracking of the permitting process may be possible, allowing a well to commence drilling before the end of CY2015. This is six months ahead of schedule, which means the newsflow is likely to be strong from now through to the end of the year for the company. 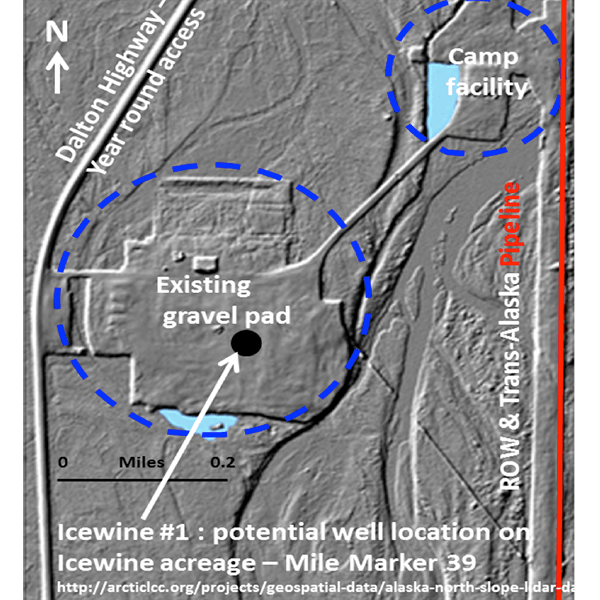 Location of an existing gravel pad at Project Icewine

Drilling this year will enable full capture of the 85% rebate on offer, which may facilitate a farm-out deal for 88E.

88E has successfully completed a strongly oversubscribed bookbuild for a placement to institutional and sophisticated investors to raise $7M.

88E’s placement will see 700 million shares issued at 1 cent per share with one free attaching option for every two Placement shares. The options are exercisable at 2 cents and expire on the 1st of March in 2018.

88E will use the $7M to complete its acquisition of Project Icewine and accelerate its exploration and drilling programmes there.

Alaska has a $3.5BN dollar deficit in its state budget, which is dependent on oil revenues to remain solvent.

But Alaska’s daily production has halved over the last 15 years and production is continuing to decline in the absence of new oil discoveries.

To resurrect the local oil industry, Alaska’s leaders have already given generous tax breaks to oil producers and explorers. The state runs a system of cash rebates of up to 85% for any money spent on exploration. 88E has indicated that drilling at Project Icewine qualifies for the full 85%, if it can be accomplished this year.

In a sign of commitment to this programme, state governor Bill Walker has drawn up a budget bill that provides $700M for oil and gas exploration rebates:

The Alaskan budget bill has passed the state’s House of Representatives and now only needs to be approved by the state’s Congress to become law.

88E will be able to claim back up to 85% of its expenditure on exploration in Alaska, providing another advantage of exploring for oil in this part of the world.