88 Energy Limited (ASX:88E, AIM: 88E, OTC:EEENF) has provided an update regarding its operations in the NPR-A region of the North Slope of Alaska.

Wireline logging will commence shortly to confirm whether mobile hydrocarbons are present.

Managing Director, Dave Wall, commented, “Whilst there is still work to do to confirm a discovery, the results to date are encouraging and we look forward to providing an additional update on the wireline program in 7 to 10 days.”

Interpretation of logging while drilling data (LWD) indicates that multiple potential hydrocarbon bearing zones have been encountered in the Nanushuk Formation whilst drilling Merlin-1.

The Nanushuk Formation, which contains the primary targets for the Merlin-1 well, was encountered ~600’ low to prognosis and is interpreted to be ~500’ thicker than that encountered in the wells drilled into the Willow Oil Field (Analogue Wells) to the north of the Project Peregrine acreage. 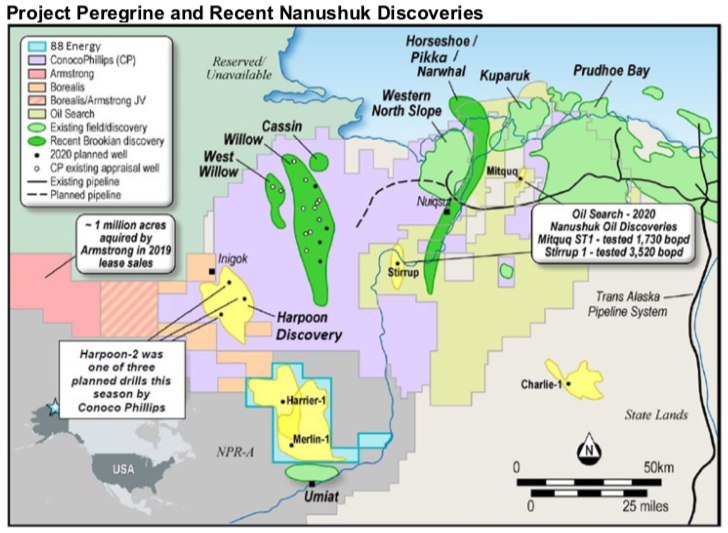 Additionally, the gamma log indicates the presence of more sand packages than those in the Analogue Wells and that the sand packages in Merlin-1 are generally cleaner in nature.

Reservoir quality will only be known once analysis of the wireline logging is complete.

Oil shows were recorded over multiple intervals in the Nanushuk while drilling Merlin-1, including the primary targets. Fluorescence ranged from relatively weak to moderate “dry” fluorescence with slow to moderate sometimes fast streaming cut when exposed to solvent.

Heavier gas components, including C5, were observed over multiple intervals. Resistivity was elevated over these intervals and is encouraging, particularly in the context that the Nanushuk is considered a low resistivity play type.

Fluorescence was also observed in the drilling mud accompanied by a petroliferous odour over three of the target intervals. Significantly, one of these intervals is interpreted to be part of a, potentially separate, sand package that is also present in the Harrier prospect.

The results are considered encouraging and the wireline program will now be run over the next week to determine the presence of mobile hydrocarbons, post a mandatory test of the Blow Out Preventer.

Until the wireline has been completed and interpreted, it will not be possible to define whether a discovery has been made.