A severe market downturn combined with an oil sector rout will send blue-chips tumbling and cause absolute mayhem among smaller stocks.

Even big players such as Woodside Petroleum and Oil Search have already been decimated in the last month with their share prices falling from about $34.00 to $22.00 and $6.50 to less than $3.50 respectively, a near 50% decline.

The negative sentiment is reflected in the S&P/ASX 200 Energy Index (XEJ) which has plummeted from about 11,000 points three weeks ago to close at 7267 points yesterday.

Of course, many smaller stocks in the energy sector that aren’t in production are seen as riskier plays, resulting in more significant falls.

However, one market minnow in 88 Energy Ltd (ASX:88E) has demonstrated that it can hold its own against both the big players and the broader index. Investors could see further share price support today after management announced on Wednesday morning that its Charlie-1 appraisal well had reached a depth of 3,500 feet, and that as planned it was now ready to commence drilling the production hole.

The Charlie-1 appraisal well is located on the Alaska North Slope, at the company’s Project Icewine where 88E along with its farm-in partner Premier Oil (LON: PMO) — is targeting 1.6 billion barrels of gross mean prospective oil resource potential, of which 480MMBO is net to 88E.

Management announced last week that it had commenced drilling the Charlie-1 well in Alaska, part of a project that has been four years in the making.

88 Energy has undertaken revised petrophysical analysis, which identified what is interpreted as bypassed pay in the Malguk-1 well.

The company also completed acquisition of modern 3D seismic in 2018, in order to determine the extent of the discovered oil accumulations.

Charlie-1 will intersect seven stacked prospects, four of which are interpreted as oil bearing in Malguk-1 and are therefore considered appraisal targets. 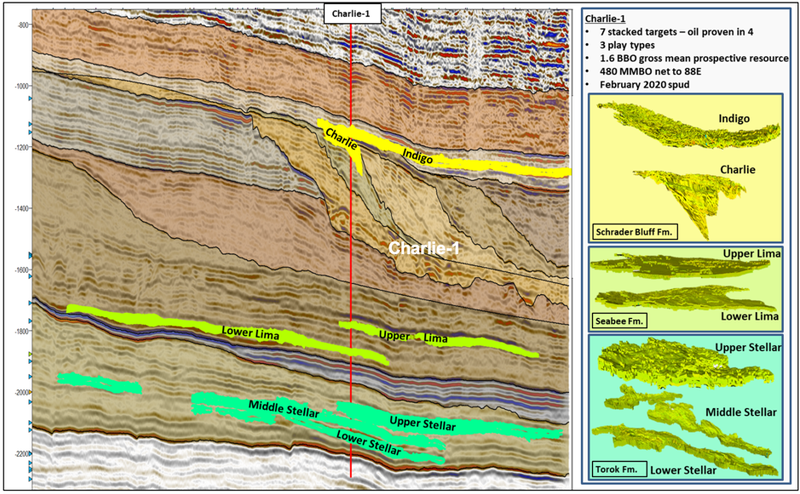 88 Energy will operate Charlie-1, via its 100% owned subsidiary Accumulate Energy Alaska, Inc, with cost of the well to be funded by Premier Oil Plc up to US$23 million under a recent farm-out agreement.

Consequently, 88E has the backing of a financially robust partner that is funding the exploration well, while still remaining highly leveraged to an oil discovery. The total Gross Mean Prospective Resource across the seven stacked targets to be intersected by Charlie-1 is 1.6 billion barrels of oil (480 million barrels net to 88E).

Flow testing should be completed by April 2020, suggesting that it will be closely watched over the next month with the potential for further share price momentum as news regarding flow tests draws closer.