88 Energy (ASX:88E, AIM: 88E) has secured a farmout for its conventional prospect portfolio at Project Icewine.

The company has negotiated an agreement which will provide financial backing, exploration funding and technical expertise, while allowing the company to maintain a material interest in the project.

The parties to the Sales and Purchase Agreement (SPA) are Premier Oil Plc (LON:PMO) — a £630 million (A$1B) capped mid cap oil company with 80,000 BOE per day in production — and 88 Energy and its Joint Venture partner, Burgundy Xploration LLC.

Under the terms of the SPA, Premier will farm-in for a 60% interest in Area A (also referred to as the Western Play Fairway) of the conventional Project Icewine acreage in the proven Alaska North Slope basin.

As you can see on the map below, Area A only makes up approximately 40% of Project Icewine. Premier will pay the full costs of an appraisal well up to a total of $23 million to test the reservoir deliverability of the Malguk-1 discovery. So essentially, Premier is taking a 24% of the acreage (HRZ excluded) for a full carry on a US$23 million well.

Premier has an option to earn a 50% working interest in Area B or C (35% of the acreage) by spending US$15 million, if the Charlie-1 appraisal well in Area A is successful.

The Charlie-1 appraisal well — which will be operated by 88E — has been designed to test all of the prospective horizons identified in the Western Play Fairway, giving benefits usually only derived from an expensive multi-well program.

The Charlie-1 well location conveniently intersects seven stacked targets, including all the primary targets – 1.6bbl gross and ~500mmbbl net to 88E on the reduced Working Interest.

The well will be drilled and tested in the March quarter of 2020 with rig options having already been identified and contracting negotiations underway.

On successful completion of the work programme, Premier will earn a 60% paying interest and assume operatorship. In the meantime, 88E will retain operatorship so can keep a lid on costs and make sure the objectives are me.

88 Energy’s net Prospective Resource for Area A (the Western Play Fairway) has been adjusted in the table below for its post Farm-Out working interest. The agreement will allow Premier Oil to farm into Area A of its Project Icewine acreage in the proven Alaska North Slope basin, close to the Trans-Alaska Pipeline and the Dalton Highway.

As highlighted below, Area A (in orange) is in the western section of Project Icewine, and it contains the Malguk-1 discovery, which was drilled by BP in 1991.

The discovery well encountered 251 feet of light oil pay in turbidite sands in the Torok formation, within the recently emerging Brookian play.

Premier estimates an accumulation of more than 1 billion barrels of oil in place, based on the original well data and its evaluation of the existing 3D dataset.

From a broader perspective there have been discoveries in excess of 4 billion barrels of oil in the Brookian play since 2013.

Consequently, the agreement provides Premier with a cost effective entry point into an emerging play following recent advances in drilling and completion techniques in a proven oil province.

Indeed, the broader area has been host to a number of large discoveries in recent years which have attracted some of the world’s largest energy companies to the region, resulting in sizeable acquisitions.

The following is a snapshot of the hive of activity that surrounds the Project Icewine territory, highlighting the presence of big players such as Conoco Phillips, Armstrong Energy and Australia’s Oil Search (ASX:OSH). 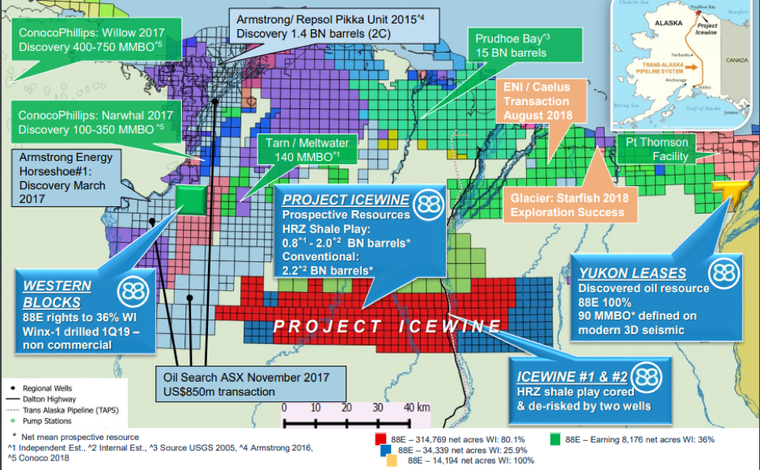 In discussing the strategic benefits of the agreement, 88 Energy managing director, Dave Wall, said, “We are delighted to be partnering with a company of the technical calibre of Premier. Premier has a strong track record of delivering projects through to production and is an excellent addition to the Joint Venture. The deal itself strikes a good balance between cultural fit, value and the meaningful working interest retained by 88E for its shareholders.

“The Charlie-1 well has been designed to test all of the prospective horizons identified in the Western Play Fairway, giving benefit usually only derived from a multi-well program.”

From Premier’s perspective, it also sees considerable upside in the shallower Schrader Bluff formation which has yet to be explored in a play similar to the Pikka/Horseshoe trend which lies to the north-east of Project Icewine.

88 Energy’s shareholders should benefit from accelerated newsflow given that Premier will be drilling its vertical appraisal well in the first quarter of 2020, and the group expects to be in a position to drill a lateral side track appraisal well towards the end of the year.