88 Energy Limited (ASX:88E) has this morning released an update on its projects located on the North Slope of Alaska.

The update primarily concerns its Project Icewine, with news that the company has begun production testing at the Icewine#2 well.

A production log was run on 12 June and confirmed that all perforations were contributing to flow. Following that, as per 88E’s ‘flowback design’, nitrogen was then introduced gradually to the wellbore from 13 June, prior to “installation of the coiled tube velocity string, to artificially lift stimulation fluids in order to gain connectivity to the reservoir”.

The company has reported that the flowback rate stabilised at 200 barrels of water per day and then steadily declined to approximately 100 barrels of water per day, as per its expectations. Further, flowback at Icewine#2 well is now being run through the separator and gas chromatograph and is considered to be 100% stimulation fluid and gas, with the gross gas rate averaging 571mcf/d.

These figures and others reported by 88E are as expected by the company for this stage of the process. In addition, “salinity measurements of the flowback fluid indicate that connectivity to the reservoir remains limited” but this was anticipated.

88E reported that the “total clean up fluid returned (net of diesel for freeze protection and any other fluids introduced as part of the current operation) since commencement of flowback on 12 June is 820 barrels” and total fluid returned for the entire flowback operation, including last year, is now 6,353 barrels or 23% of the frac fluid injected. This compares to a target percentage return of at least 30%.

The Icewine#2 well is located on the North Slope of Alaska. 88 Energy, via its wholly owned subsidiary Accumulate Energy Alaska Inc, has a 77.55% working interest in the well.

The well was stimulated in two stages over a gross 128-foot vertical interval in the HRZ shale formation.

Prior to ‘winter shut-in’ last year, “20% of the stimulation fluids had been flowed back versus a projected minimum target of 30% to gain connectivity to the source rock reservoir”. Flowback commenced, on schedule, on 11 June 2018 to clean up stimulation fluids from the Icewine#2 borehole.

It should be noted 88E remains a speculative play and there is much work to be done, so investors should seek professional financial advice if considering this stock for their portfolio.

Via its subsidiaries Accumulate Energy Alaska Inc and Regenerate Alaska Inc, 88E has been formally awarded acreage it successfully bid on in the State of Alaska North Slope Licensing round December 2017.

The company has executed lease documents and returned them to the Alaska Department of Natural Resources, and has also transferred the necessary funds.

The below map shows the new leases awarded to 88E: 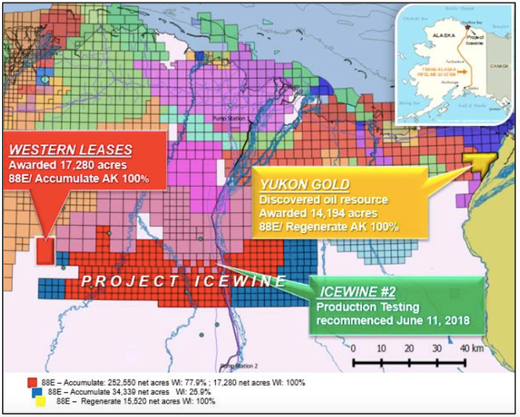