88 Energy prepares to spud while neighbour has success

88 Energy Ltd (ASX:88E) has provided a promising update in relation to its operations in the NPR-A region of the North Slope of Alaska.

The company has confirmed mobilisation of Rig-111 to the Merlin-1 drilling location, and drilling is expected to commence in the first week of March.

This is part of Project Peregrine which encompasses nearly 200,000 contiguous acres on the North Slope of Alaska.

It is situated on-trend to recent discoveries in a newly successful play type in topset sands in the Nanushuk formation. 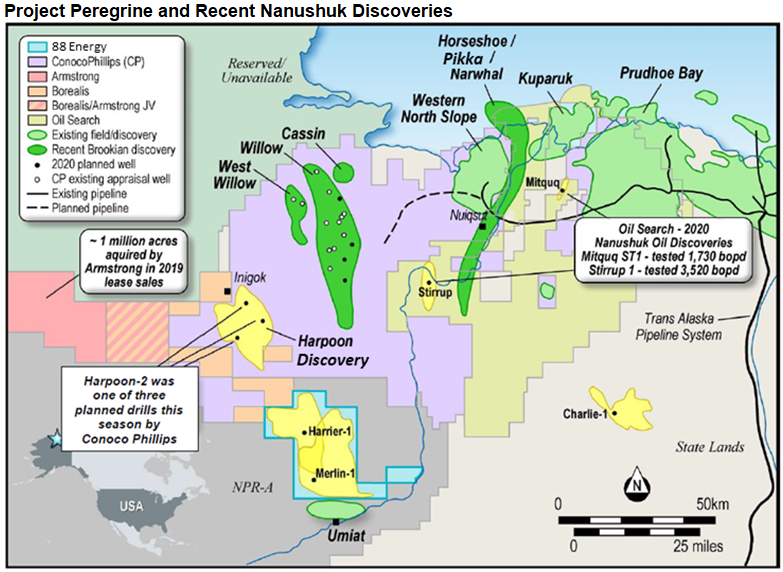 88 Energy has a 100% working interest in the project that will reduce to 50% post the completion of funding as part of a recent farm-in, whereby 88E is carried for the first US$10 million (of an estimated US$12.6 million total cost) for the Merlin-1 well.

While the well should take some four weeks to drill, intermittent logging results could provide positive newsflow.

Project Icewine also under the spotlight

88 Energy was buoyed by recent news released by Pantheon Resources PLC (AIM:PANR), a company that has just completed drilling the Talitha-A well that is situated close to the northern border of 88E’s central acreage position at Project Icewine as indicated below.

Importantly, several of prospective horizons in Talitha-A are interpreted to extend into 88 Energy’s acreage as shown above.

It is worth noting comments by Jay Cheatham, Pantheon’s chief executive who said, "We've often said that any one of the four zones at Talitha could be company makers, and we have three contenders in the SMD, Basin Floor Fan and Kuparuk, all of which show great promise.’’

‘’We were pleasantly surprised in the Basin Floor Fan and Kuparuk formations.

‘’The Kuparuk Formation is a major regional producer in the north legacy portion of the North Slope.

‘’If successful, the extension of this prolific producer to the southern areas not only opens up a potentially large oil accumulation for Pantheon but also opportunities for the industry in general."

Should Pantheon experience success with Talitha-A it could also be a game changer for 88 Energy as it should increase the value of the group’s territory at Project Icewine, as well as making it more attractive to potential joint venture partners with a view to sharing exploration costs in the future.

Harrier provides 88 Energy with a second shot at Nanushuk topsets

Harking back to Project Peregrine, a second well, Harrier-1, is intended to commence immediately following completion of operations at Merlin-1, and subject to results from Merlin-1, schedule and permit approvals.

Harrier-1 is targeting a gross mean prospective resource of 417 million barrels and is expected to cost approximately US$7 million.

As indicated below, each of the Merlin and Harrier prospects is located on trend to an existing discovery in the same play type (Nanushuk topsets).

This has de-risked the prospects considerably and resulted in a relatively high independently estimated geologic chance of success. 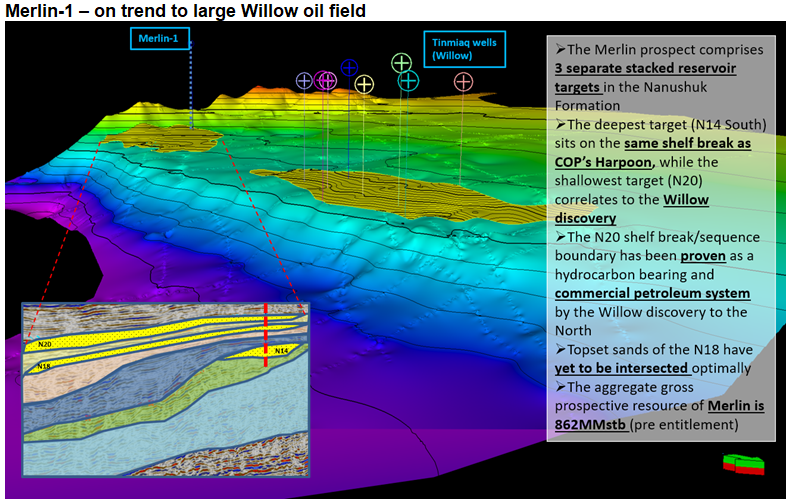 In tandem with these developments, the macro environment is looking increasingly attractive.

At the start of the week, it was highlighted by UK research and broking house Cenkos that crude stockpiles in the US were at their lowest in nearly a year.

Consequently, despite the fact that the Brent Crude Oil Continuous Contract has just recovered all of the lost ground since plummeting in February last year, and in fact, as the following chart shows it made a new 12 month high of US$63.70 per barrel on Tuesday, there may be more upside to come.

Adding further weight to the likelihood of sustained commodity price momentum are the adverse weather conditions being experienced in some of America’s most prominent shale oil-producing regions.

On this note, Cenkos said, ‘’There are further signs of supply being constrained in the near term. A frigid Arctic blast spreading across America’s largest shale oil patch has caused crude flowing from wells to slow or halt completely.

‘’Traders say several hundred barrels a day of output in the Permian Basin could be impacted by well shutdowns that began Thursday.’’