88 Energy (ASX:88E AIM:88E) advised the market on Wednesday that it had completed the rig mobilisation at Icewine#2 in preparation to test the HRZ shale, located onshore North Slope of Alaska.

There is a traditional hiatus over the Christmas/winter period in that region, and this often tends to lead to share price softness, however in 88E’s case it is trading broadly in line with where it was three months ago.

Of even more importance though, and perhaps indicative of positive investor sentiment regarding the upcoming drilling campaign is the group’s three month share price performance compared with the NymexOil (light sweet crude) index.

As the Commsec chart indicates below, with drilling about to commence 88E’s shares have broken above the index trend line. 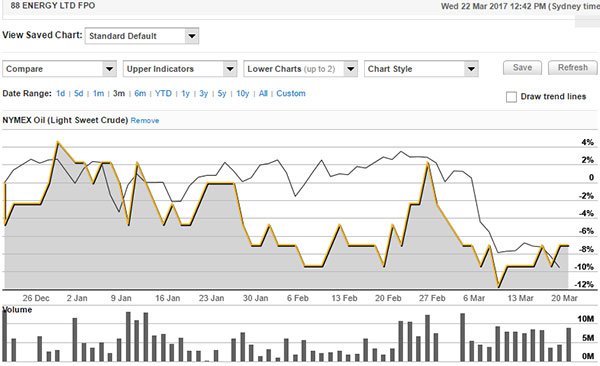 Of course it should be noted here that share trading patterns should not be used as the basis for an investment as they may or may not be replicated. Those considering this stock should seek independent financial advice.

88E’s Managing Director, Dave Wall said the well was on schedule to spud in April 2017 with stimulation and flow tests of the HRZ shale expected to commence in June/July.

It is worth noting that current modelling by Hartleys suggested an oil price of US$40 per barrel was a breakeven point, indicating that despite a recent decline in the oil price, the Icewine project remains very much in the money.

Gavin Van Der Wath from EverBlu Research initiated coverage of 88E in November, placing a buy recommendation on the stock with a target price of 8 cents, a 100% premium to the current share price.

He is of the view that the project provides ‘compelling prospectivity’, confirmed by the project’s maiden well, which prompted the decision to drill an appraisal well.

In summarising the merits of the Icewine project, Van Der Wath said, “We believe that a successful appraisal well, the potential resource size and subsequent scope of commercial development would attract the attention of all the oil majors, placing 88E in a strong negotiating position and allowing the company its pick of partners should it so choose.”

However, broker projections and price targets are only estimates and may not be met, so investors should seek professional financial advice for further information.