88 Energy (ASX | AIM: 88E), an explorer with multiple sites in Alaska has provided an update of its tenement position following the allocation of new acreage. The highlights are as follows.

Summing up these developments, 88E’s Managing Director, Dave Wall said, “Our success in this bid round provides us with the ability to significantly increase our acreage position on the North Slope and highlights the confidence that management has in both the HRZ unconventional play as well as the conventional prospectivity at Project Icewine”.

The following map shows the key areas of interest for 88E in relation to the HRZ unconventional play. 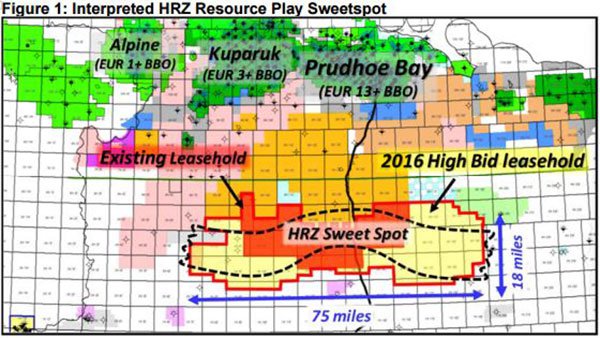 Wall highlighted that the upcoming drilling of Icewine#2 in the first half of 2017 would test the flow potential of the HRZ, and with additional acreage the company has maximised the potential upside exposure in the event of success.

Importantly, vintage exploration wells within the newly acquired lease area encountered hydrocarbon shows within the prospective play fairway. Management views this as encouraging and it will provide assistance in prospectivity analysis.

After Hartleys analyst, Simon Andrews, reviewed 88E’s modelling in relation to Project Icewine in June he attributed a speculative buy recommendation to the company, noting that the group’s modelling based on successful flow rates indicated and an oil price of US$39 per barrel justified continued exploration and development of Project Icewine.

It should be noted that this is still a speculative stock broker projections and price targets are only estimates and may not be met. Also, historical data in terms of earnings performance and/or share trading patterns should not be used as the basis for an investment as they may not be replicated. Those considering this stock should seek independent financial advice.

Andrews underlined the fact that the market had been concerned that the relatively higher cost environment in Alaska would mean that Project Icewine would require an oil price above US$50 per barrel to be economic.

Not surprisingly, since the rebound in the oil price which has seen it move well above US$50 per barrel, 88E’s share price has increased more than 10%. Whether this is the start of a more sustained run will possibly depend on the group’s exploration results over the next six months

With regard to the company’s prospects for success in a challenging industry, Andrews said, “The huge number of wells drilled in the Lower 48 states has enabled operators to identify the sweet spots in a particular basin, but to also achieve operational efficiencies with better frac designs generating higher flowrates, faster drilling and longer laterals, effectively improving overall field economics”.