88 Energy Ltd (ASX:88E) has entered into a collaborative agreement to expand its position on the northern slopes of Alaska where it has been actively developing Project Icewine.

88 Energy already has a substantial position in Alaska with the Icewine Project.

Icewine is a large acreage position on a multiple objective, liquids rich exploration opportunity, and the current gross acreage position is circa 475,000 ounces contiguous acres with 301,000 acres net to 88 Energy.

88 Energy is earning a 36 percent working interest in the four leases totalling 22,711 acres immediately adjacent to the Horseshoe 1/1A oil discovery well, which discovered oil in 2017.

The close proximity to the Horseshoe Project and the nominal distance between the Western Blocks and Project Icewine can be seen below. 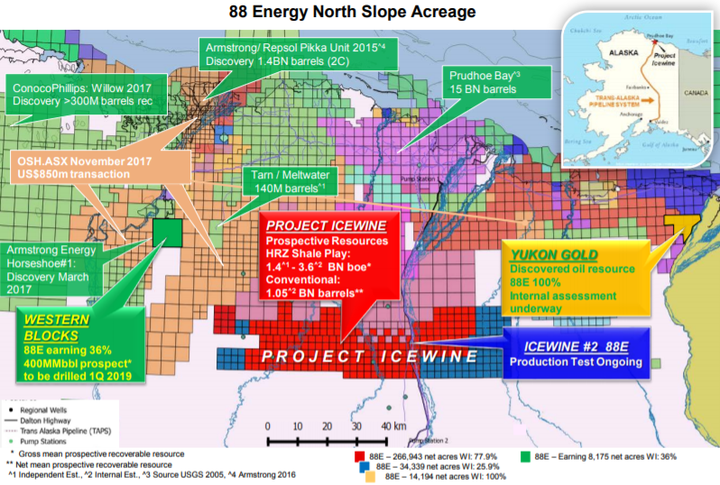 88 Energy will fund its share of the performance bond, back costs and well cost (gross well cost estimated at US$15 million on a dry hole, trouble free basis) out of its existing cash position.

Total net cost to 88E is estimated at US$6.4 million and cash at bank is currently US$11.1 million (unaudited).

Definitive documents are scheduled for completion prior to the payment of the performance bond on July 31, 2018.

88 Energy, with its consortium partners Otto Energy Ltd and Red Emperor Resources NL, will pay a US$3 million performance bond to the State of Alaska and 100 percent of the costs of the well.

The group will be targeting a 400 million barrel prospect, to be drilled in the March quarter of 2019 with preparations already underway.

88 Energy Managing Director, Dave Wall, highlighted the significance of this development in saying, “The Western Blocks transaction represents a significant opportunity for 88E shareholders to gain exposure to one of the most prospective oil plays available globally, complementing our existing conventional portfolio on the North Slope.”

Wall has good reason for confidence as seismic data interpreted by Otto Energy indicates that the prospect shares many of the positive attributes seen at the Horseshoe discovery.

The seismic amplitude map shown below points to the positive data identified by Otto Energy. 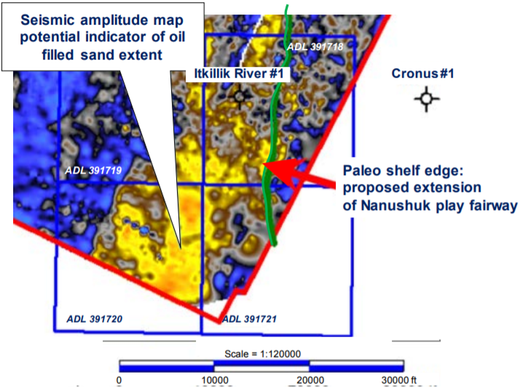 Exploration at Horseshoe 1 and 1A intersected light oil reservoired in more than 150 feet and 100 feet of net oil sand respectively in the Nanushuk delta sequence at just over 5,000 feet below the surface.

The oil discovery at Horseshoe extended the Nanushuk play some 20 miles south of existing discoveries which flowed 30 degree gravity crude at rates of 2,160 and 4,600 barrels per day respectively.

The Horseshoe oil discovery signalled the presence of an extensive previously overlooked hydrocarbon province on the North Slope, which is now attracting major development capital.