88 Energy Limited (ASX:88E; AIM:88E; OTC:EEENF) has entered into an agreement with Alaska Peregrine Development Company, LLC (APDC) that will facilitate continuation of the exploration program at Project Peregrine next winter.

Project Peregrine is located in the NPR-A region of the North Slope of Alaska and encompasses approximately 195,000 contiguous acres.

It is situated on trend to recent discoveries in a newly successful play type in topset sands in the Nanushuk formation.

Under the agreement announced today, 88 Energy will acquire a 50% working interest from APDC in Project Peregrine for consideration that incorporates a mix of cash, royalty interests, shares and 10% of gross sale proceeds in respect of an assignment of greater than 49% of Project Peregrine within 24 months, excluding a bona fide farm-out.

Following completion of the acquisition, 88 Energy now holds a 100% working interest in Project Peregrine, located in the NPR-A region of the North Slope of Alaska.

Following detailed engagement with APDC on the proposed future program at Project Peregrine, it was agreed for various reasons that the greatest value for both parties could be obtained via 88 Energy acquiring APDC’s interest in the project.

Importantly, this approach allows 88 Energy to pursue a continuation of the exploration program at Project Peregrine next winter, whereas APDC had indicated that it was contemplating a pause in activity to further understand the results from Merlin-1.

Discussing the new arrangements, managing director Ashley Gilbert said, “This is an excellent outcome for our shareholders as we now have full control of the project, including the possibility of further farm-out to a new partner with greater technical and operational capability, ahead of future planned drilling and exploration activity.

"With the additional data we now have in hand, the potential for improved transaction metrics has increased.

"We also remain optimistic about the future results from the ongoing laboratory tests related to the Merlin-1 well.

"APDC has been a good partner and we thank them for their contribution, but ultimately it was deemed in the best interests of both parties for 88 Energy to consolidate its interest in the project, creating the best opportunity to maximise value for all stakeholders.

"Having 100% working interest in both Project Peregrine and the neighbouring Umiat Oil Field opens up significant potential for the company to realise value in the region.”

APDC issued the following statement regarding the transaction: “We are very proud of the important role that we played in the drilling of Merlin-1 and the initial exploration program at Project Peregrine. However, we also recognize that we are unlikely to be able to satisfy anticipated funding requirements for operations in future seasons. Because we do not want to hold 88 Energy back from future development of the acreage, we felt that it was prudent to enable 88 Energy to consolidate its interest in Project Peregrine to allow the project to move forward. APDC has maintained exposure to vast potential upside associated with Project Peregrine through a royalty interest and other value triggers.”

By way of background, the Merlin-1 well was spudded in March 2021 and targeted 645 million barrels of gross mean prospective resource.

With drilling now complete and the interpretation of results underway, a second well (Harrier-1) is planned to be drilled in 2022 and is targeting a gross mean prospective resource of 417 million barrels.

Encouraging results at Merlin-1 included moderate to excellent reservoir quality in multiple sand packages and the observation of free fluid and extensive shows throughout the well, as well as hydrocarbon evidence when pressure reduced.

From a broader perspective, additional targets were identified during drilling.

It is important to note though that APDC will remain liable for all outstanding cash calls in relation to Merlin-1, and will have contributed a total of US$20 million towards the project at completion.

However, this agreement does not include the Umiat Oil Field which lies to the south of Merlin-1.

The following map shows Project Peregrine and recent Nanushuk discoveries with Merlin-1, the upcoming Harrier-1 and Umiat Oil Field lying to the south. 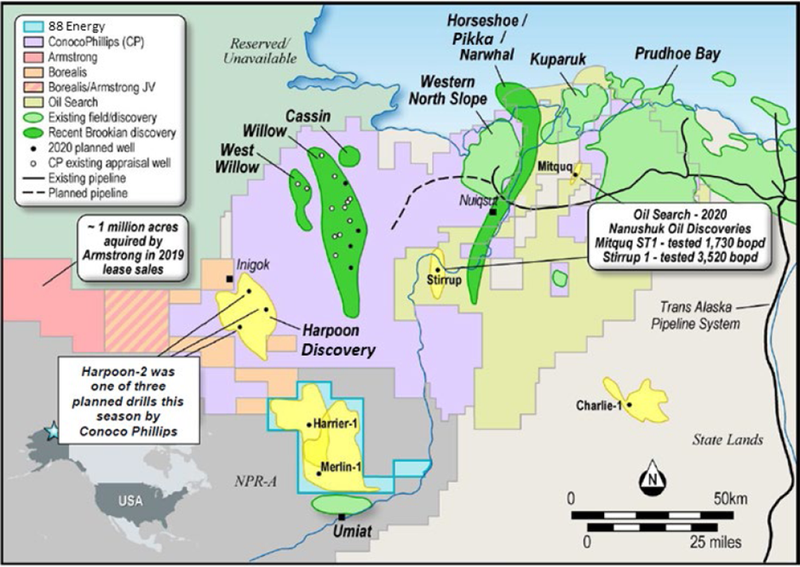 As illustrated below, the Merlin-1 well and the Harrier prospect are located on trend to an existing discovery, in the same play type (Nanushuk topsets). 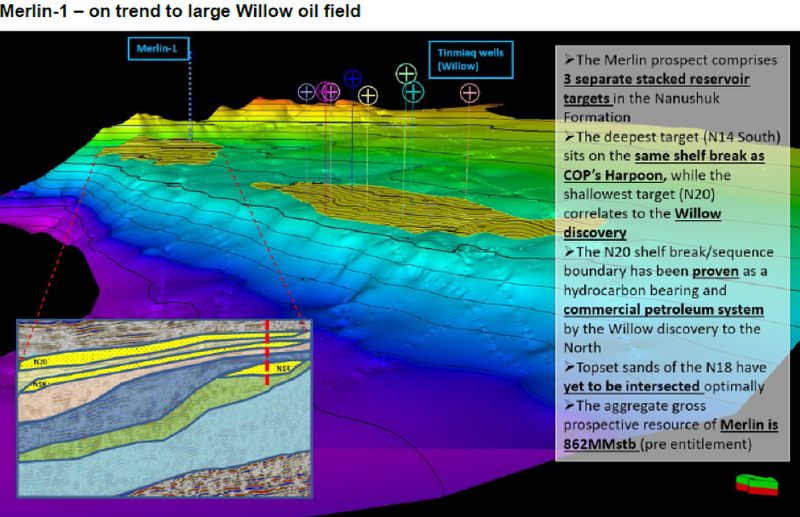 This has de-risked the prospects considerably and resulted in a relatively high independently estimated geological chance of success.

The "chance of success" percentage factor comes into the equation when attributing valuations to unproven prospects.

Consequently, this works in favour of 88 Energy as it should support valuation metrics being applied to these assets.