Will Imugene’s expertise in immunotherapies result in an AstraZeneca type rerating?

The cohort of patients that would be the key beneficiaries of this drug generally face a poor prognosis and low long-term survival rates. Stage III lung cancer represents approximately one third of NSCLC incidents and was estimated to affect 100,000 patients in the G7 countries in 2016.

Success in bringing Imfinzi to market would be a game changer for the global health industry, and indeed AstraZeneca. Consequently, its share price spike of 9%, the largest daily increase in three years, was not surprising.

However, as can be seen from the following chart, there has been continued support for the stock and it is trading at record levels as these results have arguably repositioned the company at the forefront of the broader Immuno-Oncology (IO) drug development industry, a science that is seen as the way of the future in terms of finding cures for life-threatening conditions such as cancer.

It should be noted here that share trading patterns should not be used as the basis for an investment as they may or may not be replicated. Those considering this stock should seek independent financial advice.

What do the trials tell us

The initial results from the PACIFIC trial mean Imfinzi is the first Immuno Oncology (IO) medicine to show superior PFS in this setting. The implications for patients for whom surgery is not an option are potentially life changing. AstraZeneca is now working with global regulatory authorities to bring Imfinzi to lung cancer patients as soon as possible.

This news comes hot on the heels of AstraZeneca’s rapid clinical development and approval of Imfinzi for patients with advanced bladder cancer, further demonstrating the potential of this important medicine as a cornerstone of the company’s extensive IO portfolio.

It is important to bear in mind that this development has positioned AstraZeneca as a potential leader in the broader treatment of lung cancer with Iressa, Tagrisso and an IO pipeline led by Imfinzi as monotherapy as well as in combination with tremelimumab in different stages of disease and lines of therapy.

In terms of AstraZeneca’s medium to long-term prospects, while the success of Imfinzi has piqued the curiosity of the investors, it is only just the beginning as the company’s immunotherapy (IO) molecule durvalumab is being comprehensively tested in both monotherapy and combination clinical trial settings for a large variance of tumour types, stages of disease and lines of therapy. 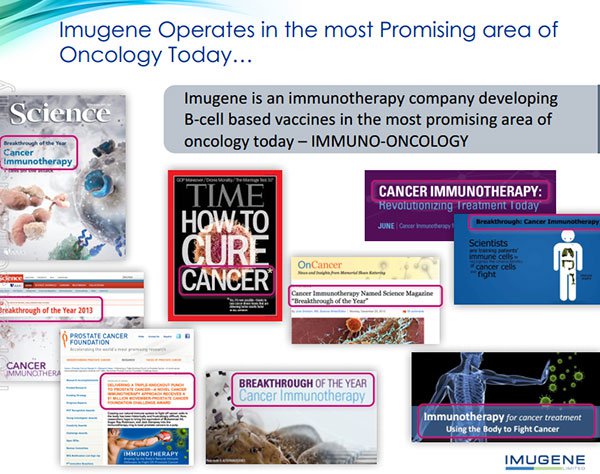 Imugene (ASX:IMU) is a clinical stage immuno-oncology company headquartered in Melbourne, Australia. Its lead product is HER-Vaxx, a B Cell peptide vaccine for the treatment of gastric cancer.

Gastric or stomach cancer is the second most common cause of cancer-related death in the world and the fourth most commonly diagnosed cancer, with over one million new cases diagnosed each year.

IMU is also developing mimotope-based immunotherapies against validated and new oncology targets. HER-Vaxx is a cancer immunotherapy designed to treat tumours that over-express the HER-2/neu receptor, such as gastric, breast, ovarian, lung and pancreatic cancers. 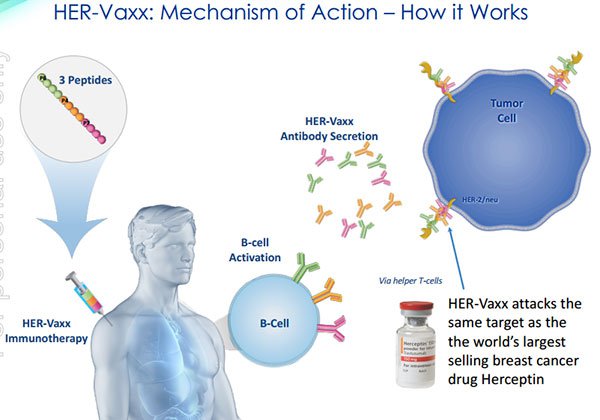 Developed by leading scientists at the Medical University of Vienna in Austria, the peptide vaccine is constructed from several B cell epitopes of HER-2/neu. It has been shown in pre-clinical studies and in one Phase I study to stimulate a potent polyclonal antibody response to HER-2/neu, a well-known and validated cancer target.

While that is a brief description of the science behind the therapies, from a corporate perspective it is worth noting that Imugene is in partnership with the Medical University of Vienna as the pair work to discover and develop mimotope-based immunotherapies against validated and new oncology targets.

This partnership has the potential to create game-changing B Cell peptide vaccines that would replace or augment conventional monoclonal antibodies.

IMU received a Notice of Acceptance from the Australian Patent Office for Patent Application 2016250289 titled “A vaccine composition and uses thereof”, which protects its HER-Vaxx cancer immunotherapy.

This new patent protects innovative new vaccine formulations designed to enhance the immune response obtained on administration of HER-Vaxx, a proprietary HER2 positive cancer immunotherapy that stimulates a polyclonal antibody response in patients with HER-2 positive cancers.

As recently published in the journal BMC Cancer, and announced February 13, 2017, the enhanced formulation of HER-Vaxx incorporates an existing, clinically and commercially validated vaccine carrier protein called CRM197 together with an adjuvant.

In part, the BMC article highlighted the fact that CRM led to faster onset of high antibody levels compared to the P467-virosome, and the authors went on to state, “Importantly, anti-P467 IgG antibodies exhibited anti-tumor properties and the combination of anti-P467 specific IgG with Herceptin® was found to inhibit the proliferation of Her-2/neu-overexpressing cell line SK-BR-3 in a significantly higher capacity than Herceptin® alone”.

In terms of IMU’s long-term future, this strengthening of the company’s patent portfolio is an important milestone and underpins its commercialisation strategy.

Chong highlighted the fact that the additional patent life adds an additional six years to the time HER-Vaxx could remain generating peak sales, adding to the total amount of potential sales achievable by HER-Vaxx, hence significantly increasing its value.