This involved identifying several biomarkers that have been shown to change in concentration in the presence of colorectal cancer.

The mass screening market for people aged between 50 and 74 in the US, European Union and Australia alone is estimated to be more than $12 billion.

Rhythm continues to work with a number of global parties on the most effective test development, optimisation, validation and clinical utility of the reagents that will form the core components to the final ColoSTAT® test.

This work will be verified in a series of confirmatory analytical tests, making up Study 6.

The completion of the development, optimisation and validation of these tests will lay the foundation for the final kit development, production transfer, manufacture and sale of ColoSTAT®. 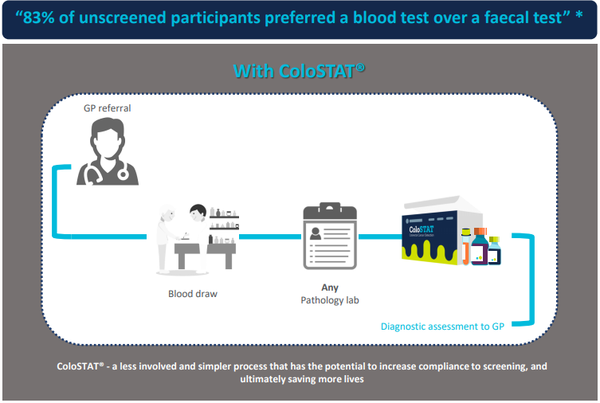 Rhythm is confident that the appropriate antibodies have now been identified along with an informed development pathway for progressing the remaining reagents and test development making up the final commercial ColoSTAT® test.

Additionally, Rhythm has identified preferred suppliers, consultants, manufacturers and has established a clear sequence of events to de-risk the science and achieve successful registration.

The completion of the test optimisation, validation, kit development and transfer to manufacturer program, coupled with the clinical trial analytical results, will form key regulatory components for CE Mark (Europe) and TGA (Australia) for submission in fiscal 2021.

Management said that it is confident of the technology, the biomarker selection and the work of over 13 years of CSIRO research. 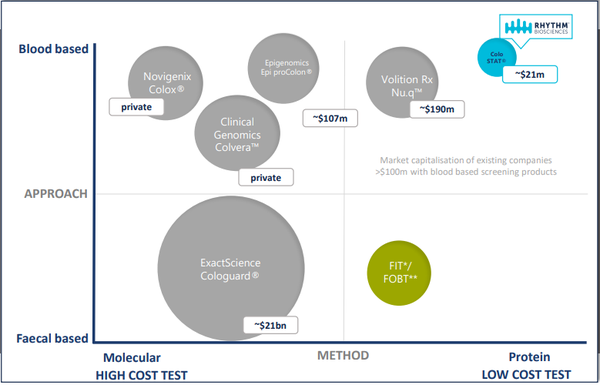 Earlier in the year, Rhythm advised that Adelaide's Lyell McEwin Hospital would be the first site for the company’s proposed 1,000-patient clinical trial (Study 7) of ColoSTAT®.

This was followed by Monash Health and the Alfred Hospital, both leading Melbourne hospitals.

Investors have acknowledged the significance of these developments in recent months with the company’s shares increasing by approximately 40% in June/July.

By the end of June, the first patients for the trial had been recruited by the Lyell McEwin and Monash Health hospitals.

Management expects the first patients to be enrolled by the Alfred and Royal Melbourne in the coming weeks, ensuring all four trial sites will be up and running.

Rhythm anticipates the recruitment rates to significantly increase over the next two quarters with the recent inclusion of the three large Melbourne hospitals.

Management, in conjunction with its trial partners and advisors, will continue to monitor the progression of patient recruitment which is on track to be completed in fiscal 2020.

In May, Rhythm’s Quality Management System (QMS) was certified as compliant with the International Organization for Standardisation (ISO) EN 13485:2016 standard.

This was a major development for the company as EN ISO 13485:2016 is the internationally recognised quality standard that ensures the consistent design and development, production, storage and distribution of medical devices that are safe for their intended purposes.

Further, EN ISO 13485:2016 is recognised by the Global Harmonization Task Force (GHTF) and has become the model QMS standard for the medical industry.

It is the first step in achieving compliance with European and Australian regulatory requirements and a major milestone in the company’s pathway to market.

Certification with this standard demonstrates compliance to the laws and regulations of the Medical Device industry and enables Rhythm to be classified as a manufacturer of In Vitro Diagnostics and Medical Devices for its own and in-licensed products for worldwide registration and sale.

While the development of the final test kit remains Rhythm’s key task, management also continues to work on identifying appropriate partners for the global commercialisation of ColoSTAT®.

The technology and strategy have been well received by potential partner companies, and discussions with several IVD/pharma companies are ongoing.

In parallel, the ongoing development of a ”go to market” plan has commenced for Australia, identifying critical success factors to be met to ensure maximum uptake and sales of ColoSTAT®. 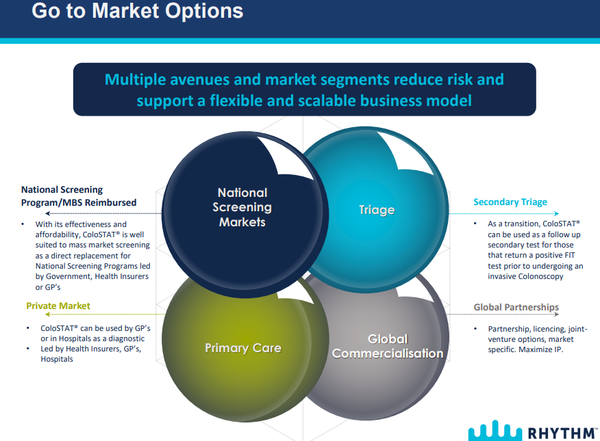 From a financial perspective, the company is in a robust position, finishing the June quarter with cash of $4.7 million.