It was in July that Finfeed last caught up with Rhinomed Ltd (ASX:RNO), highlighting the success of its Mute nasal stent, the fastest growing product in the nasal strip category in US based drug stores.

The DrugStores News Management’s Annual Drugstore State of the Industry report at that stage listed Mute as the fastest growing product in the nasal strip category, growing sales at 56.6% in US dollar terms and 57.2% in units for the 52 week period ended April 21, 2019.

As important as Mute’s progress was, we pointed out at the time that there was much more to the company than the mute nasal stent, as Rhinomed was in the process of monetising several applications of its technology portfolio in the sport, sleep, well-being and drug delivery markets.

For example, at that stage order volumes for the group’s new ProntoTM rechargeable vapour delivery technology had been encouraging.

Management pointed out at the time that Mute’s rapid growth against exceptionally well established and supported brands such as GlaxoSmithKline’s (LON:GSK) Breathe Right strip product demonstrated Mute’s growing appeal and its potential to achieve further distribution in the US drug store market and then more broadly within the food, mass and specialty retail markets in the US.

As indicated in the following charts, Rhinomed went on to deliver in spades and demonstrated its ability to bring even more products to market and broaden its distribution reach. 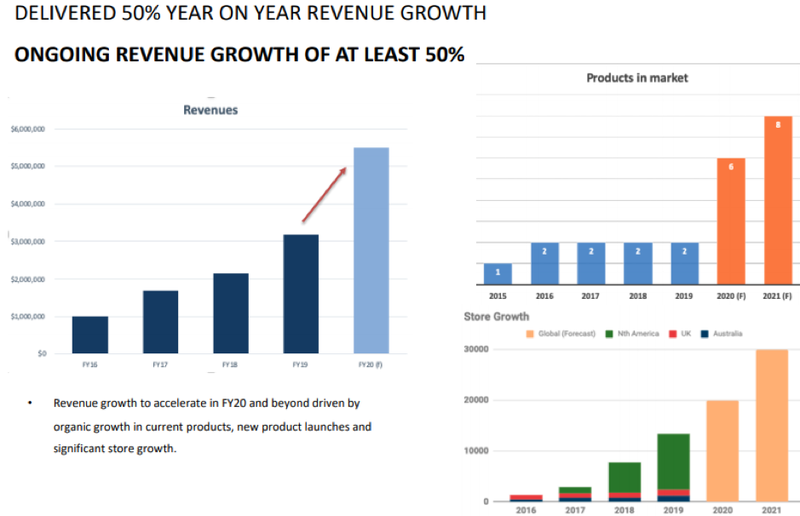 Friendly, Finfeed felt it was timely to discuss the company’s achievements over the last few months and gain an understanding of management’s near to medium-term strategies aimed at sustaining rapid growth trajectory.

In discussing the company’s progress to date and the foundations that have been laid for future development, chief executive Michael Johnson was quick to underline the fact that Rhinomed had taken a measured approach to laying the foundations for what is now a group with a large portfolio of products that will drive growth well into the future.

In terms of its industry position it is important to understand that Rhinomed isn’t an early stage biotech play, throwing money at R&D and constantly raising capital without any sign of income.

Rhinomed has established acceptance and adoption of the technology in Global OTC markets as a Class 1 device across many areas as indicated below.

The company’s products are stocked in 13,000 stores globally and distributed through online platforms such as Amazon.

Significantly, e-commerce is already delivering 30% of revenues, and this could grow quickly with the emergence of opportunities to list products online in China via the likes of Alibaba.

From a broader perspective though, the company is poised to accelerate revenue growth beyond levels of around 50% that it is currently achieving with the release of five new products for December 2020.

As we will go on to discuss, Rhinomed can launch new products targeting new markets by leveraging off a product that is already proven and approved at all levels from FDA to CE Mark and TGA.

Bringing the Nike touch to a new playing field

The company has plenty of corporate polish about it, setting it apart from many other fly by night biotechs that lack focus and discipline in terms of product development and financial management.

As is the case in any business, management sets the tone.

You only have to look at the diversification and levels of expertise at board level to appreciate what has central to Rhinomed’s success, and just as importantly, this will be the brains trust that provides the astute execution required to drive the company’s next growth phase.

Johnson brings a great depth of experience table having worked in and for a wide spectrum of companies from ASX 300 through to start-up companies in Life Sciences, Cleantech, Financial Services, Energy and Utilities, Manufacturing, Marketing and Communication.

Chairman, Ron Dewhurst has a particularly strong financial background with 40 years of experience across banking and asset management, holding key positions such as Head of Americas for JP Morgan Asset Management.

He brings a wealth of experience in terms of managing the group’s largest geographical market.

Brent Scrimshaw is a non-executive director who helped lead the creation of Nike’s overall global operating strategy, as well as playing a senior role as a key member of the Global Commercial Operations Executive team, responsible for worldwide sales and distribution strategies employed by the sporting goods giant.

He is invaluable in terms of shaping the group’s strategy in bringing consumer products to market.

With digital platforms playing an increasingly important role in product sales, Scrimshaw’s position as chief executive of Unscriptd.com, one of the world’s fastest growing digital media companies focused solely on sport and in partnership with household names such as Andre Agassi, Steffi Graf, Cathy Freeman and Stephanie Gilmore provides Rhinomed with an extra layer of expertise in product distribution.

Sport has been a key market for Rhinomed since its early days.

The early version of Rhinomed’s internal stenting technology, was made from an ultra-soft polymer and was worn inside the nose to gently stent each individual nostril, by an adjustable ratchet mechanism.

Several years on from this study, the newest iteration of Rhinomed’s technology platform is TurbineTM.

The new design has introduced features specifically for sports use.

Notably, the shape now follows the contours of the internal nasal anatomy so it stays in place while active. 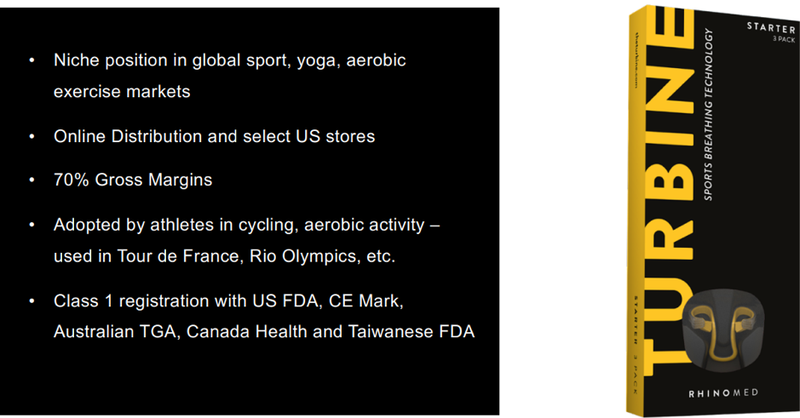 Most importantly, as the nasal valve is key to increasing airflow as demonstrated in clinical trials, Turbine’s shape and position (when fitted correctly) precisely targets the valve making it a far superior product to other internal nasal stents.

From running marathons to sleeping soundly, Rhinomed has all bases covered.

Research shows the humble nose holds the key to a good night’s sleep.

The ability to breathe freely through the nose during sleep, rather than the mouth, is essential to optimising sleep, as well as providing long term health benefits.

If the ability to breathe freely is affected by congestion, blockages, a deviated septum, or simply narrow airways this is very likely to disrupt sleep and/or significantly contribute to snoring.

This is where the company’s Pronto Sleep product comes into play, and the benefits outlined below speak for themselves.

Also on the sleep front, the July launch of Pronto Sleep has driven the potential growth in the over-the-counter sleep category.

As we outlined earlier, this is another product that has FDA, CE Mark and TGA class I registration.

Pronto has proprietary essential oil formulation to aid with sleep and a unique rechargeable that delivers up to 10 nights of better sleep.

From a financial perspective, Pronto is already delivering gross margins of 70% and this could well accelerate as distribution volumes increase.

However, as you can see below Rhinomed has identified numerous applications for the Pronto device, and the following table indicates the pipeline of products and investors can expect to be launched over the coming two years.

Not just another medical cannabis company

In September 2018, Rhinomed completed a landmark nasal drug delivery licensing deal with US based Columbia Care (CCHW:NE), a leading player in the US CBD (cannabinoids) and medical cannabis market.

Rhinomed engaged the CSIRO to review the existing delivery landscape while commencing work on designs that would optimise the delivery of cannabinoid formulations through the nose.

This is an US$18 billion market and the negotiation of a 12 year licensing deal exclusive to the US is a strong endorsement of the company’s technology and licensing model.

The company is looking at a cost plus double-digit royalty rate in addition to double-digit profit-sharing depending on the distribution channel.

This will include both CBD and medical cannabis applications. 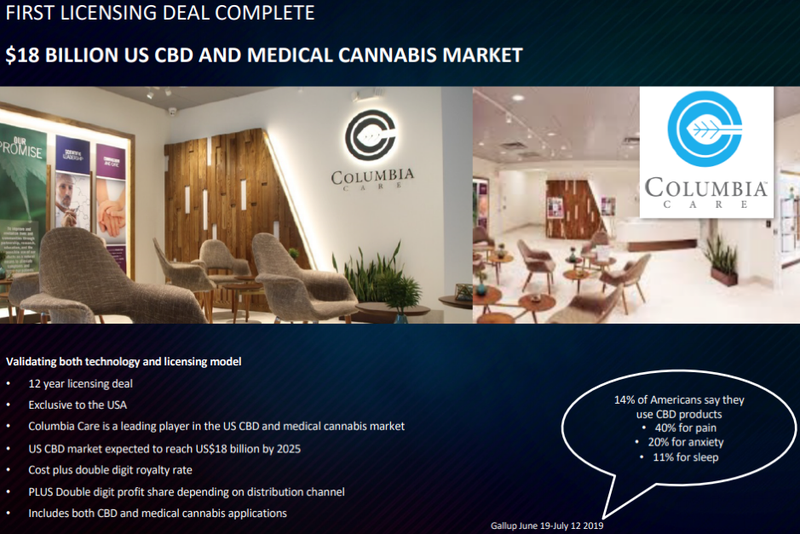 In carpentry terms, Rhinomed’s measure twice/cut once strategy has served it well and it is now poised to grow exponentially off a relatively fixed cost base, cashing in on getting it right in the early stages.

Analysts appear to be in accord regarding the company’s growth prospects and the metrics which will drive improved returns on capital invested as distribution volumes increase.

Wilkie said, “We see fiscal 2020 as shaping up to be a pivotal year for RNO with its products stocked in over 13,000 stores globally, the rollout of its new Pronto range (decongestion and anxiety/sleep), as well as emerging details on its drug delivery platform via its partnership with Columbia Care which we view as the major near-term catalyst (expected late calendar year 2019).’’