Shares in PharmAust Ltd (ASX:PAA) opened at 15 cents on Thursday morning, representing a gain of nearly 40% on the previous day’s close in response to extremely positive news regarding the performance of its treatments in reducing SARS-CoV-2 (COVID-19) cell-to-cell infectivity in cell culture in a repeat preliminary experimental evaluation.

The clinical stage oncology group provided an update on its repeat cell culture preliminary experiments investigating the effects of monepantel (MPL) and monepantel sulfone (MPLS) upon cells infected with SARS-CoV-2 in cell culture.

PharmAust’s lead drug candidate is monepantel (MPL), a novel, potent and safe inhibitor of the mTOR pathway, a key driver of cancer.

MPL has been evaluated in Phase I clinical trials in humans and dogs, and it was well tolerated and produced a significant reduction in key prognostic biomarkers.

The company is uniquely positioned to commercialise MPL for treatment of human and veterinary cancers as it advances the drug in Phase II clinical trials.

Today’s news focused on the replication of the in vitro virus infectivity experiment and using the same TCID50 method as that announced a fortnight ago, it confirmed initial findings.

qPCR is quicker, cheaper and less labour intensive, yet a less informative experiment than TCID50.

It is initially used to check whether TCID50 should be performed.

Given both qPCR and TCID50 both showed monepantel antiviral activity in the previous experimental set, only TCID50 was performed in the repeat experiment which demonstrated that infectivity of SARS-CoV2 virus particles can be suppressed by up to approximately 95% in cell cultures by either MPL or MPLS. 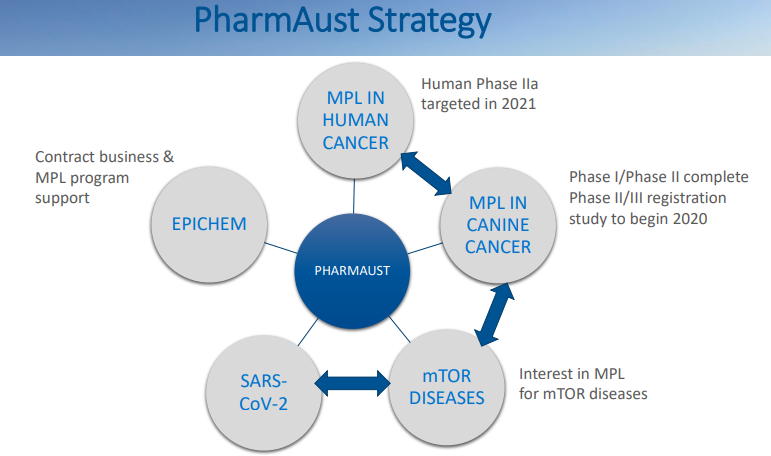 PharmAust is now engaged in further discussions with the Walter and Eliza Hall Institute to investigate key next steps to further explore the significance of this work.

Importantly, this will include comparisons with other mTOR inhibitors, such as rapamycin and current anti-viral drugs authorised by the FDA for emergency use to treat COVID-19, such as remdesivir.

Highlighting the significance of these findings, Pellegrini said, “These are encouraging anti-viral profiles.

‘’These exciting repeat results validate the results of the initial test and form strong grounds for progressing the drug to the next step.

‘’Demonstrating twice that infectivity of SARS-CoV-2 virus particles can be suppressed by up to approximately 95% in cell cultures is a remarkable outcome.

‘’We intend to continue collaborating with PharmAust with pre-clinical experimentation to support their progress.”