This comes on the back of a busy period for PharmAust on the corporate front with the recent appointment of experienced pharmaceutical and healthcare executive Colin La Galia has joined Epichem, a wholly owned subsidiary of PharmAust, as its new chief executive officer

The company’s success has been reflected in its share price performance over the last six months as it increased from 3.3 cents to a 12 month high of 17 cents in September.

Weakness in broader equity markets appeared to be central to the retracement in October, but with the company trading in the vicinity of 10 cents, it is still up about 200% since May.

PharmAust also raised $2.4 million in October through a placement at an offer price of 12 cents per share with a significant proportion of the proceeds be used to accelerate human clinical trials of Monepantel.

From a broader perspective, PharmAust specialises in repurposing marketed drugs lowering the risks and costs of development.

The group’s subsidiary, Epichem, is a successful contract medicinal chemistry company that is forecasting $4.2m revenues in FY2019/20.

As the company’s lead drug candidate, Monepantel is a novel, potent and safe inhibitor of the mTOR pathway – a key driver of cancer.

The drug has been evaluated in Phase 1 clinical trials in humans and dogs, and it was well tolerated, producing a significant reduction in key prognostic biomarkers.

PharmAust is uniquely positioned to commercialise Monepantel for treatment of human and veterinary cancers as it advances the drug in Phase 2 clinical trials. 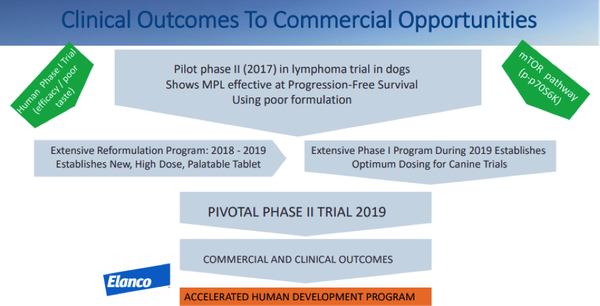 A collaboration agreement between PharmAust and U-Vet in Werribee, whereby the University of Melbourne’s Department of Veterinary Clinical Sciences is the managing body, will assist in the recruitment of eligible dogs both from Melbourne and areas further afield.

All inventory, including antibodies and blood collection tubes have arrived on site.

A similar hub and spoke system is being employed in Sydney through the Animal Referral Hospital in Homebush, the body that conducted the previous trial using the gelatin encapsulated liquid capsules to successfully treat pet owners’ dogs with cancer.

Management hopes to replicate this type of system in other geographic areas, enabling local veterinarians to facilitate recruitment.

Trial data release will occur when a clear and meaningful trend becomes apparent and this will depend upon dog recruitment rates across the participating sites, highlighting the importance of scale in terms of the number of veterinary sites involved.

PharmAust anticipates an update to the market next month.