In what management conservatively termed a ‘’successful outcome’’, a total of six of seven eligible and enrolled pet canine patients have completed assessment following “at home” treatment by their owners.

One dog failed to medicate in accordance with the study protocol and was removed from trial assessment early on.

This dog, however, continued receiving monepantel tablets and has now reached over 120 days of treatment with prednisolone added to the treatment regimen by the veterinary surgeon. 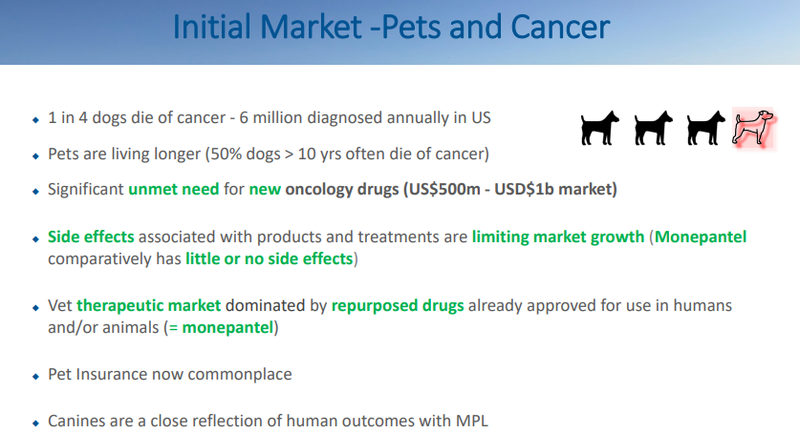 Following 14 days of monepantel tablet treatment, the veterinarians reported that one dog achieved a partial response with a greater than 60% reduction in total tumour burden and with one lymph node tumour regressing completely.

Four dogs achieved stable disease and progressive disease was seen in one dog.

This outcome provides a meaningful trend, comparing favourably with the treatment used in the original “liquid” monepantel formula reported on 3 December 2017, where six of seven dogs achieved stable disease and progressive disease was seen in one dog.

After 14 days treatment, one dog with progressive disease and one with a partial response, but elevated liver enzymes, discontinued monepantel tablet treatment.

A new lesion, however, became apparent in two of these dogs and some elevated liver enzyme values not resulting in clinical illness were also noted.

Plasma MPL levels were recorded for all dogs and reached levels up to 50 times higher than those recorded in the human trial undertaken at the Royal Adelaide Hospital in 2014/2015.

Some variability was observed in plasma levels and, unexpectedly, at the lower blood levels of MPL there were better outcomes.

This observation may be consistent with the mechanism of action of mTOR inhibitors and lends itself to reducing and optimising the future dosing of monepantel tablets.

Commenting on these outcomes, University of Melbourne and U-Vet Werribee’s Dr Claire Cannon, the principal investigator overseeing the trial, said, “Monepantel appears to be showing anti-cancer activity in dogs with lymphoma and I believe that controlled Phase III trials are now warranted to investigate the efficacy and safety of lower dose monepantel.

‘’The Phase II trial results suggest that monepantel, perhaps in combination with standard of care lymphoma therapy, may represent a future prospect for treatment of dogs with this disease.”

Based on these findings, the Phase II trial is now on hold while an Interim Report is finalised for Elanco US Inc, highlighting both the efficacy parameters as well as the induction of inappetence and elevated liver enzymes at very high dosage levels of MPL.

In discussing the prospects of improved outcomes in phase III trials, PharmAust’s Chief Scientific Officer Dr Richard Mollard said, “Having the monepantel tablets achieve a 60% reduction in tumour burden in one dog, with one lymph node returning to normal, is a terrific and unexpected outcome.