MMJ Phytotech (ASX:MMJ) announced on Monday morning that its Canadian subsidiary, United Greeneries, had received an import permit from Health Canada and the Canadian Food Inspection Agency allowing for the importation of one kilogram of cannabis seeds.

Management highlighted that this will enable United Greeneries to commence cultivation activities at its fully licensed Duncan facility located in Canada. As a backdrop, MMJ is the first Australian based company to receive a Canadian medicinal cannabis cultivation license, and one of only a few companies globally with the capacity to commercially cultivate medicinal grade cannabis in a federally regulated environment.

Shares surged circa 10% in response to the announcement.

Although share trading patterns should not be used as the basis for an investment as they may or may not be replicated. Those considering this stock should seek independent financial advice.

MMJ is focused on becoming a large scale cannabis producer, targeting direct supply to the growing Canadian medical and recreational markets which will have an estimated combined value of between C$8 billion and C$9 billion by 2024.

As outlined below, MMJ has an impressive vertically integrated model which provides it with control across the entire medicinal cannabis value chain through three business units strategically located in favourable jurisdictions with support of regulatory frameworks in place.

Consequently, the receipt of the permit which effectively facilitates cultivation by United Greeneries is an important development for the broader group.

Management noted today that due to international prohibitions on the transport and importation of cannabis, the availability of legal starter materials had been very limited. MMJ’s ability to resolve this issue should be well received by industry participants as it will enable the provision of a broad range of cannabis varieties that had not previously legally been available to Canadian consumers.

United Greeneries will now undertake the staged expansion of the Duncan facility with initial earmarked production of approximately 7500 kilograms of cannabis by the end of 2018, the facilities first full year of production. The group then plans to ramp up production at the facility to circa 60,000 kilograms by 2022.

This is not only important from an operational perspective, but it is potentially financially beneficial given that the company is no longer dependent on purchasing limited genetics from other licensed producers who would normally be in a position to dictate pricing. Reliability of supply and the ability to fully utilise the company’s integrated business model are other benefits.

Given that United Greeneries will be able to supply the Canadian market with a variety of cannabis strains that cover the entire spectrum of cannabinoid profiles, the company believes that it will be in a position to gain a first mover advantage in the Canadian recreational market.

The group’s positioning in other favourable jurisdictions outside Canada as indicated below also appears promising as this could assist in providing expansion into new geographic regions. 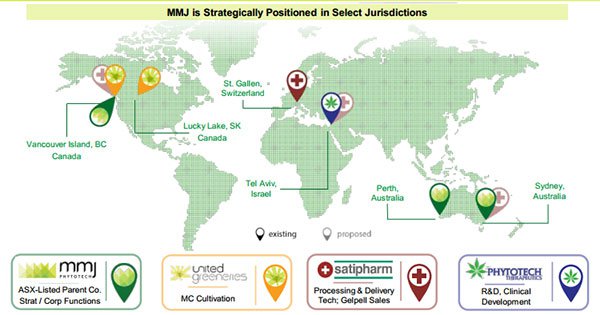 In terms of timing, the group expects to receive the material within the next two weeks and commence growing operations at the Duncan facility in December with a view to increasing production in the first quarter of 2017.

This indicates that there are a number of milestones on the horizon, many of which have the potential to provide further positive share price momentum.

However, it is impossible to predict share price movements and investors considering this stock should not base investment decisions on such assumptions. Furthermore, projections regarding market size, market penetration and production milestones are only estimates and independent financial advice should be sought if considering this stock.