MMJ PhytoTech (ASX:MMJ) says it could parlay its recent Canadian regulatory approval to produce medical cannabis into the circa $5 billion recreational market on the back of regulatory progress.

The Canadian government recently announced the formation of a taskforce on marijuana legalisation and regulation – with an eye towards potentially legalising cannabis for recreational use.

The task force comprises of experts in law enforcement, medicine, policy, and health care administration – and is set to report back to the government by November this year.

The government has also committed to the introduction of a new regulatory system covering cannabis by the northern hemisphere spring next year.

If the task force recommends legalising cannabis for recreational use, MMJ told its shareholders that it would be in a unique position to take advantage of the market opportunity.

It recently gained approval to grow cannabis for medicinal uses in its Duncan facility in the country – becoming an authorised Licensed Producer under the Marihuana for Medical Purposes Regulations (MMPR).

It said that the requirements for consumer protection and product quality control in the potential new system could be quite similar to MMPR regulations.

There is no guarantee a new system will emerge from the taskforce, though, thus anyone looking at this stock to add to their portfolio should not use this as the basis for any investment decision and should apply caution to that decision.

The new government, led by Prime Minister Justin Trudeau, has affirmed its commitment to legalising cannabis for recreational use in the past – filling MMJ with a measure of confidence that changes will come to pass.

Currently, while growing cannabis for medical purposes is legal – it remains a Schedule II drug under the country’s Controlled Drugs and Substances Act.

Suffice to say, MMJ managing director Andreas Gideon is excited by the possibility of a new market opening up.

“The legalisation of the recreational market is expected to be a major value driver for MMJ and its shareholders, providing strategic access to an emerging market,” he said.

“As we have witnessed in states throughout North America, the legalisation of recreational marijuana has been a key catalyst in allowing regulated cultivators into a growing market.”

Located in Duncan, British Colombia, MMJ has invested approximately CAD$8 million ($A8.25 million) on the construction and establishment of the Duncan Facility, which contains high compliance items such as a Level 8 Narcotics Vault and a full service in-house biochemical and analytical laboratory. 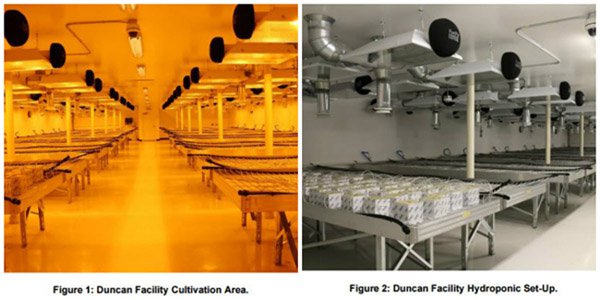 MMJ is awaiting identical MMPR approval for its much larger Lucky Lake facility, which if approved could provide an 1100% increase in production capacity.

MMJ has two other wholly owned subsidiaries separate to United Greeneries, with Swiss based Satipharm which is already generating revenues from its CBD based medical products and Israeli based subsidiary PhytoTech Therapeutics involved in medical cannabis research.