Shares in cancer immunotherapy drug developer, Imugene (ASX:IMU) rallied more than 7% on Thursday while the S&P/ASX All Ordinaries index plunged 65.5 points or 1.1%.

Moreover, the recent strong performance by the S&P/ASX 200 Health Care Index (XHJ) also came to a grinding halt as it fell 246 points, representing a decline of 1%.

While yesterday’s robust performance by IMU was promising on a standalone basis, it is a continuation of a rally that started early last week when the company’s shares were trading at 1.2 cents. Yesterday’s close of 1.5 cents represents an increase of 25%.

From a broader perspective, the XHJ (yellow line) was due for a rally, for the most part having trailed the S&P/ASX 200 index (XJO) over the last 12 months as this chart indicates. 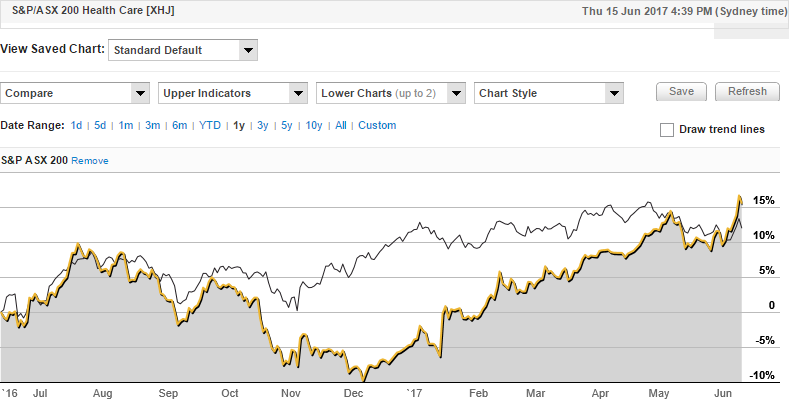 The recent break above the XJO can mainly be attributed to a strong performance from index heavyweight CSL which has surged nearly 10% since last week when it announced the US$352 million acquisition of a majority stake in Chinese plasma fractionator, Wuhan Zhong Yuan De Biologicals.

Not only does sector underperformance eventually provide the catalyst for merger and acquisition activity, but the commencement of such activity is often the line in the sand in terms of a more sustained across-the-board recovery.

The Australian health care sector has traditionally thrived through acquisition activity, led by the likes of CSL and other prominent players such as Ramsay Health Care (RHC) in the hospital sector, Sonic Healthcare (SHL) in the pathology and diagnostic imaging sector and Ansell (ANN) in the equipment and capital goods industry segments.

Global licensing deals to the value of $3.4 billion in antibody industry

The same dynamics have been at play in the global health sector. While deals aren’t necessarily the subject of a formal takeover, lucrative licensing agreements are struck whereby major pharmaceutical enterprises invest considerable funds in smaller companies in order to reap the benefits as licensee in the development and commercialisation of important new drugs.

These were the top 10 big pharma deals in 2015, 20% of which were in the antibody space, a significant statistic from IMU’s perspective, particularly if merger and acquisition activity and/or licensing deals gain momentum in Australia. 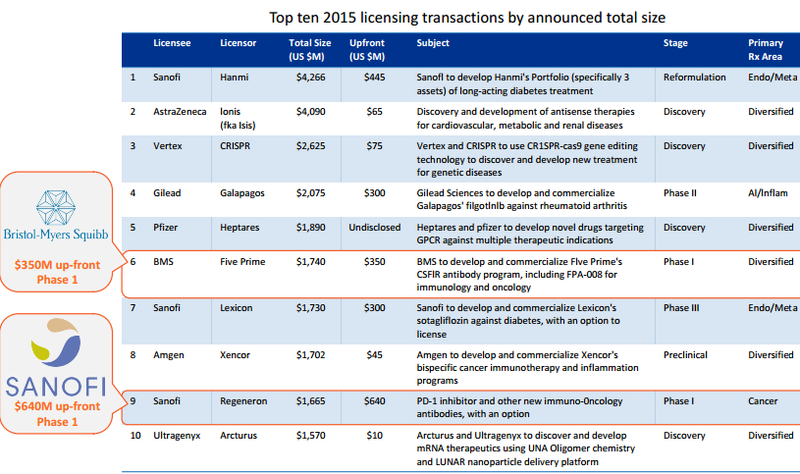 IMU is developing cancer immunotherapy drugs based on antibodies, focusing on B cell based vaccines in the fast growing field of Immuno-oncology.

Immunotherapy is the treatment of cancer with substances or drugs that stimulate the patient’s immune response, known as immunisation. Unlike chemotherapy, immunotherapy drugs do not target the cancer directly, rather they help the patient’s own immune system recognise and attack cancer cells.

IMU has two compelling antibody programs and commercial opportunities including the HER-Vaxx peptide vaccine being developed for HER2+ gastric cancer. The following demonstrates how the drug is administered and the impact that it has, and as noted the similarities it shares with the world’s largest selling breast cancer drug, Herceptin. 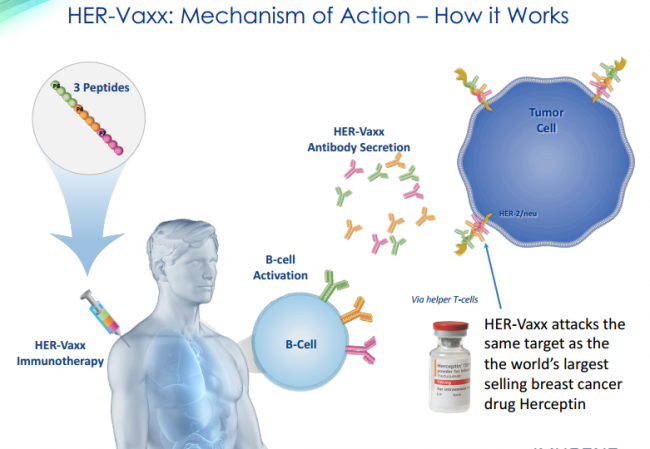 IMU noted in January that interim phase 1B/2 data would likely come to hand in the first half of 2017, suggesting some promising news flow could be imminent. Furthermore, the final phase 1B/2 trial readout is expected in the second half of 2017.

Whether the recent run in the company’s share price is linked to confidence regarding the potentially positive nature of this data cannot be confirmed, but the timing appears to be on the mark.

While IMU is a microcap, it has strong institutional support. Most notable is Platinum Asset Management’s stake in the company which was increased from circa 6% to more than 9% in November 2016.

Of course this is still an early stage play and investors should seek professional financial advice if considering this stock for their portfolio.

The recent retracement in the company’s share price which is evident in the 12 month chart below can be attributed to a lack of news flow early in the calendar year, but as can be seen IMU has still outperformed the S&P/ASX 200 Health Care index over the period. 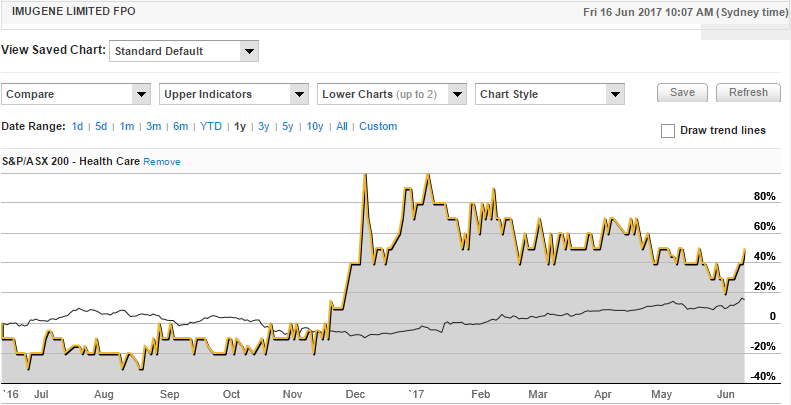 During the six months between November and April there was a substantial outperformance by IMU, and as the chart indicates, the company appears to be at a stage where it could broaden the gap once again should the recent rally continue.