Immuron expands collaboration with US Department of Defence

Biopharmaceutical group, Immuron (ASX:IMC) informed the market on Tuesday that it was expanding the current scope of a cooperative research and development agreement executed in June 2016 with the Walter Reed Army Institute of Research (WRAIR).

This is an important development for IMC as the company strengthens its participation in the development and commercialisation of a globally critical therapeutic, as well as expanding its relationship with the US Department of Defence which supports a wide range of activities addressing infectious diseases, and is central to the broader US government’s global health initiatives.

The current agreement will be expanded to include the development of three fluoroquinolone-resistant Shigella specific anti-microbial therapeutics for pre-clinical evaluation. WRAIR will fund the evaluation of the anti-Shigella specific activity of IMC’s new antibodies.

It should be noted here that IMC is a speculative stock and investors should seek professional financial advice if considering this stock for their portfolio.

Joining the development program and expanding the scope of the program even further will be the Armed Forces Research Institute of Medical Sciences (AFRIMS) which will fund and perform the evaluation of the three Shigella specific therapeutics in non-human primate (NHP) clinical studies which results in the full clinical spectrum of the disease as seen in humans.

Commenting on the significance of addressing this issue, Immuron Chief Operating and Scientific Officer, Doctor Jerry Kanellos said, “The rampant occurrence of antibiotic resistance in Shigella, and the high incidence of this disease, underscores the need for the development of new non-antibiotic therapeutics against this human pathogen.

Shigella is a highly virulent pathogenic organism that can cause disease in humans at extremely low infectious doses. Exposure to as little as 10 to 100 bacteria can cause disease and therefore Shigella can spread easily from person to person.

The emergence of fluoroquinolone resistance in Shigella undermines a major challenge and new therapeutic strategies are urgently needed. Infection in humans is characterised by the ability of Shigella to invade the mucosal epithelium, replicate intracellularly and spread intercellularly. The prioritisation applied to addressing this condition is highlighted in commentary by the World Health Organisation (WHO).

Fluroroquinoline-resistant Shigella was identified by the WHO as one of 12 families of bacteria that pose the greatest threat to human health. In February 2017, the WHO published its first ever list of antibiotics-resistant “priority pathogens” to help guide and promote research and development of new therapeutics to address the growing global resistance to antibiotic medicines.

Highlighting the potential benefits that could flow from IMC’s involvement, Kanellos said, “The resources and expertise that AFRIMS, the US Naval Medical Research Center and WRAIR have at their disposal will help advance Immuron’s promising new therapeutics faster toward clinical trials”.

IMC’s technology platform targets the essential virulence factors and key antigens these super-bug organisms require to survive and use to evade the host immune system, colonise the gut and translocate into the systemic circulation.

IMC’s therapeutics target these organisms in the gut, neutralise the toxins they produce and inhibit them from entering the mucosa and causing apoptosis and infection of macrophages and epithelial cells.

Shigellosis caused by Shigella species is endemic throughout the world, and is one of the most important causes of global childhood mortality and morbidity. The WHO estimates that Shigella causes about 165 million cases of severe dysentery globally every year, resulting in more than a million deaths each year, mostly among children in the developing world.

Consequently, the potential addressable market for IMC is massive, and even playing a part role in developing a therapeutic could be extremely lucrative for the company.

Importantly, IMC already generates revenues from its Travelan drug and is progressing well with the development of other agents for the treatment of conditions such as colitis, once again representing a large target market.

On April 18 the company reported that its IMM-124E anti-inflammatory agent for the treatment of colitis, a chronic and often debilitating group of bowel diseases that affects millions of people, showed a significant positive effect on all levels of evaluation including clinical parameters, tissue level parameters and immunological biomarkers.

This has resulted in the progression to phase II trials, an achievement that resulted in IMC’s share price increasing from 41 cents to 70 cents in a fortnight.

The following demonstrates the number of agents in the pipeline and the relatively progressed stage the company is at in many cases. Furthermore, it also highlights IMC’s leverage to a wide range of conditions rather than relying on success with one particular drug. 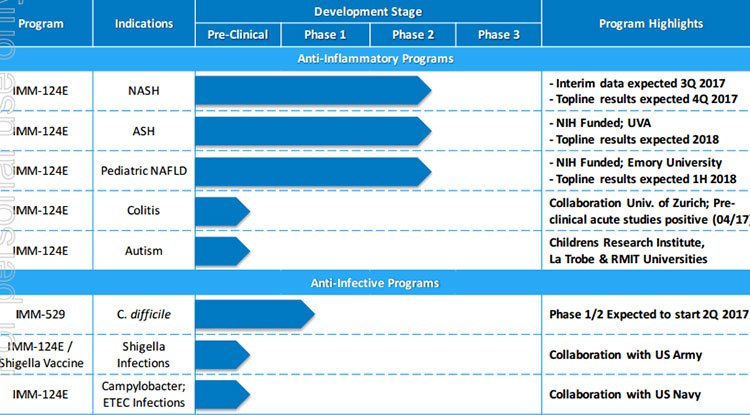