Genetic Technologies is a diversified molecular diagnostics company that has already had success with cancer risk detection products that it has launched.

With regard to the group’s colorectal cancer breakthrough, it incorporates the most impactful risk factors in order to define an individual’s risk of developing colorectal cancer, so the healthcare provider can make screening and preventative care recommendations that are tailored to their patient’s personalised risk.

In addition, rates of colorectal cancer among 20-49 year olds are steadily increasing.

Identifying patients who are most at risk for colorectal cancer can lead to enhanced screening protocols and better outcomes.

Most individuals diagnosed with colorectal cancer do not have a significant family history of the disease.

‘GeneType for Colorectal Cancer’ evaluates the genometric risk of developing colorectal cancer for men and women over age 30 who do not have a known pathogenic gene variant.

In sporadic colorectal cancer, no single gene mutation is causal of disease.

‘GeneType for Colorectal Cancer’ analyses a patient’s DNA for more than 40 SNPs that have been clinically validated in their association with colorectal cancer.

By combining the effects of all of these SNPs into a single polygenic risk score (PRS), ‘GeneType for Colorectal Cancer’ provides a superior risk stratification over standard risk assessments that incorporate only clinical factors.

‘GeneType for Colorectal Cancer’ is clinically validated for men and women 30 years of age or older and for individuals of Caucasian descent.

Genetic Technologies sees the scope for continual improvements in its tests, and with the opportunity to add fully validated models for additional ethnicities the company’s growth profile continues to improve.

Further, the robust share price momentum displayed on Friday could well continue as the group’s technologies are demonstrated to have applications in larger markets.

Genetic Technologies’ latest progress in detecting breast cancer risk is equally impressive, particularly given that it will be building on an already strong position in this field.

Germline genetic testing for mutations in BRCA1 and BRCA2 allows for the identification of individuals at significantly increased risk for breast and other cancers.

However, such mutations are relatively rare in the general population and account for less than 10% of all breast cancer cases.

The remaining 90% of non-familial or sporadic breast cancer have to be defined by other genetic/clinical markers common to the population at large and this is where Genetic Technologies has focused its attention.

The newly developed ‘GeneType for Breast Cancer’ test is aimed at risk detection of non-BRCA related sporadic breast cancer (that is, for those women who do not have an identified family history of breast cancer). 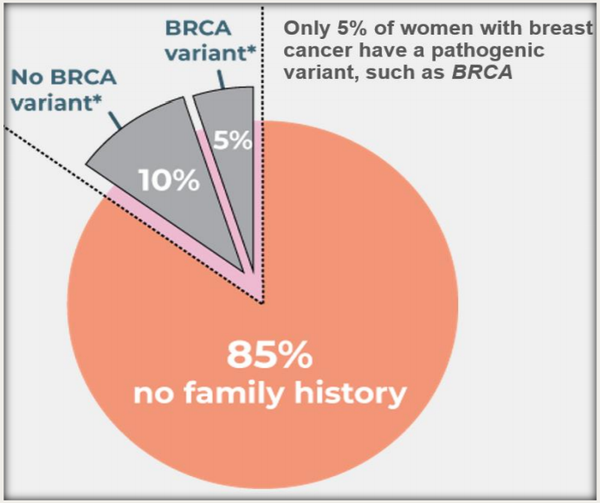 Demand to be driven by affordability

Genetic Technologies’ new tests tick all of the boxes in terms of their scientific credibility, but the company has also maximised its opportunities of gaining market saturation by making the tests affordable to individuals, as well as positioning the tests to become part of regular health care provider health checks and a core component of government health cost reduction programs.

Economic benefits of early detection are compelling, particularly given the high costs of treatment from late stage diagnosis.

The added incentive for healthcare providers is that the tests provide a basis for the initiation of lifestyle changes that can reduce both types of cancer.

With a strong global patent portfolio, Genetic Technologies is poised to enter new markets, with one of the most recent prominent developments being the establishment of collaborative agreements with Chinese partners which should provide assistance in terms of technological development, as well as opening up a multi-billion dollar market.

Management intends to introduce the new ‘GeneType for Colorectal Cancer’ and ‘GeneType for Breast Cancer’ genetic tests to healthcare providers through a global network of distribution partners.

The company has already announced it is working with TGen in the United States and also Chinese partners connected to the Hainan Free-Trade Zone.

More announcements are anticipated in this regard in coming months as the company moves to commercialise its suite of world-leading genetic tests.

Following the successful completion of the ‘GeneType for Colorectal Cancer’ and ‘GeneType for Breast Cancer’ genetic tests, GTG’s highly credentialled scientific and product development division will refocus on the future pipeline of new tests as detailed below.