DMX 200 grows in promise for Dimerix

Shares in Dimerix (ASX:DXB) could receive a boost on Tuesday after the company revealed positive news regarding clinical data in relation to Part A of its Phase 2 study in patients with chronic kidney disease.

This assay enables the identification of pairs of receptors that function in a joint manner when ligands, small molecule drugs, peptides or antibodies bind to them.

The Receptor-HIT technology was used to identify DMX-200 and an internal drug development program, initially for the treatment of a subset of patients with chronic kidney disease. In addition to its own therapeutic programs, the company also earns revenue by providing this technology to global pharmaceutical firms. 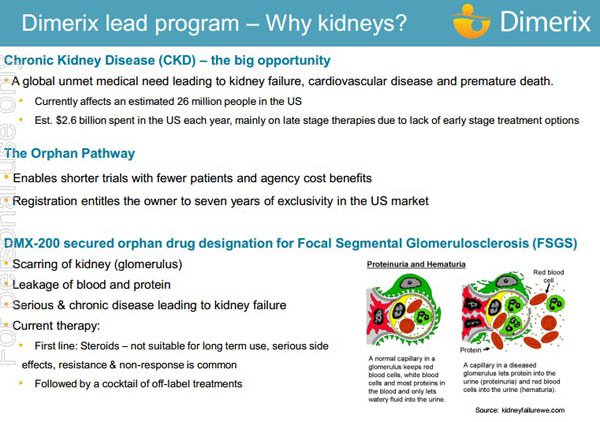 DMX 200 combines two existing drugs, irbesartan and propagermanium (PPG) with the former being an off patent angiotensin II type 1 receptor blocker indicated for the treatment of hypertension and nephropathy in Type II diabetic patients. PPG has also been used for the treatment of Hepatitis B in Japan and is available in the US for its anti-inflammatory properties.

DMX 200 has been shown to improve the outcome of chronic kidney disease by reducing the proteinuria by more than 50% in animal models.

However trial results are unpredictable and investment decisions should not be made on the basis of speculation regarding their outcomes.

This background is important in understanding the significance of today’s developments given that DMX 200 trials to date have shown that the first 21 participants (of potentially 30 to be tested) had demonstrated that the therapy is well tolerated with an encouraging safety profile.

Even more encouraging is the fact that 27% of patients who have reached or passed the midpoint of the study have shown a reduction of at least 50% in proteinuria over and above standard of care.

Dimerix executive chairman Dr James Williams highlighted the importance of these developments, saying, “Interim data from Part A of this study increases our confidence in the safety of DMX 200 in this patient population and indicates that clinically significant reductions in proteinuria are possible in some patients”.

Williams also noted that the group was now in the final stages of recruitment for Part A and ready to move to the next stage of the trial. He underlined the fact that chronic kidney disease affects over 26 million people in the US alone and represents a large unmet medical need with progression of disease resulting in end-stage renal disease.

It is worth bearing in mind that two participants who have completed the study continued to access treatment through the Therapeutic Goods Administration (TGA) special access scheme at the request of their doctor. One of these achieved a reduction of more than 50% in proteinuria (66%).

The next 12 to 18 months will be a busy period for DXB with numerous potential share price catalysts as outlined below identified recently by NDF Research.

There has also been substantial activity by other players in this space including Retrophin Inc, a NASDAQ listed fully integrated biopharmaceutical group dedicated to delivering life changing therapies to people living with rare diseases with significant unmet medical needs.

One of its focus areas is sparsentan for focal segmental glomerulosclerosis (FSGS), a disorder characterised by progressive scarring of the kidney often leading to end-stage renal disease, as well as neurological disorders.

It has released some promising news in this field with a recent study achieving statistical significance in the primary efficacy endpoint for the overall sparsentan treatment group, demonstrating a greater than two-fold reduction of proteinuria compared to irbesartan after the eight week, double-blind treatment period.

The subsequent share price rally would be of interest to DXB shareholders. Retrophin’s share price increased from circa US$16 to US$21 on the day the news was released, representing a gain of approximately 30%.

While DXB doesn’t boast the big market cap of Retrophin, it is making significant headway in terms of gaining the respect of regulatory bodies in the US.

On this note, analyst Stuart Roberts from NDF Research highlighted when initiating coverage of Dimerix that a meeting with the FDA in June aimed at seeking regulatory guidance on its proposed FSGS indicated that after the current Phase 2 work the group could potentially take DMX 200 into a single pivotal study of less than 100 patients where reduction in proteinuria could be an approvable endpoint and early data review an option.

There has been noticeable interest in DXB since July with its share price doubling, and perhaps investors are cognisant of the fact that the company’s merits could be recognised sooner rather than later. Indeed, Robert sees the scope for a substantial rerating with his target price of 4 cents implying upside of circa 170%.

However, it should be noted that DXB is an early stage player in a highly competitive market and past share price performances may not be replicated, and as such should not be used as a basis for making an investment decision. 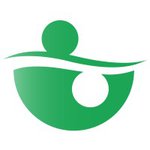 Earlier than Expected - DXB Gets First Regulatory Approval in Europe.