The agreement with MEDI-IN s.r.o. will generate immediate revenue and cash flow, and will see the company’s bottled, hemp extract-based food supplement distributed in the Czech Republic via more than 300 retail outlets, including pharmacy chains.

With many players in the pharmaceutical industry only at trial stage and well short of being in a position to supply end markets, this is a significant development for CPH.

In particular it provides the company with a notable point of difference, compared with the many new entrants that are having a tilt at the cannabis medicinal industry due to the expectation of strong growth as applications broaden and acceptance increases. 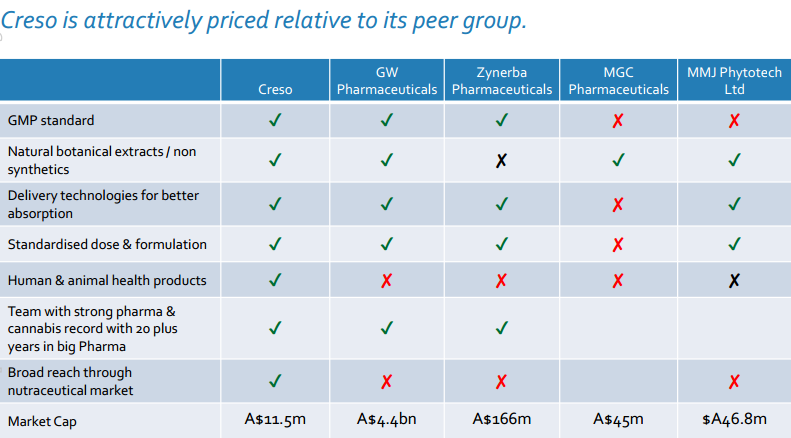 As at October 31, 2016, CPH’s market capitalisation is circa $10 million as its share price has retraced since the above data was compiled.

CPH has performed strongly since listing on the ASX less than two weeks ago with its share price hitting a high of 39 cents last week before retracing to circa 30 cents. This implies a 50% premium to the group’s IPO price of 20 cents.

Potential investors should note that share price trends may not be replicated and as such should not alone be used as the basis for an investment decision. Furthermore, independent financial advice should be sought if considering an investment in CPH.

As part of the agreement, MEDI-IN s.r.o. is committed to perform extensive marketing activities relating to the sale of CBDium in the Czech Republic, including but not limited to e-commerce and direct marketing to retail stores.

CPH Chief Executive and co-founder Doctor Miri Halperin Wernli, commented, “Hemp-based CBD is providing us with the nutritional support to maintain and regain health and wellness.”

CPH’s chairman and co-founder Boaz Wachtel, highlighted the fact that MEDI-IN was a first-tier distributor with experience in supplying natural medications, as well as medical equipment to hospitals, pharmacies, sports and food stores. With experience in marketing to a wide range of industry representatives across the health and well-being spectrum, the group looks to be a perfect partner for CPH.

In providing some background to this development Wachtel said, “This agreement was only made possible through Creso Pharma’s acquisition of Slovakia based Hemp-Industries and it marks an important milestone for the company, bringing both immediate revenue and cash flow to our newly listed company, as well as first exposure in the EU market for our products”.

Wachtel said he is expecting strong demand and rapid growth in the European market and has flagged this agreement as the first of many partnerships which will assist in expanding the group’s distribution network into additional markets.

CPH has numerous strings to its bow with other cannabis derived therapeutic grade nutraceutical products being developed in Switzerland which have applications in improving the health and well-being of both humans and animals.

This development comes less than a week after the company announced that it had entered into a Letter of Intent with Swiss Pharma company, Streuli Pharma, for the commercialisation of cannabis and hemp based nutraceutical products based on CPH’s proprietary INNutri Soft Gums technology.