Investors recognised the potentially company transforming nature of the results when they were released to market with Actinogen’s shares spiking more than 450%.

The results demonstrated a significant improvement in cognition in trial participants dosed with Xanamem 20mg (milligrams) daily for 12 weeks, compared to those who received the placebo.

This is the first time Xanamem has shown such a clear, statistically significant cognitive improvement in humans.

The XanaHES trial was primarily designed as a placebo-controlled study to investigate the safety of 20mg Xanamem in healthy elderly subjects, but also included an exploratory assessment of cognition to evaluate the cognitive efficacy of Xanamem, using the industry standard Cogstate Cognitive Test Battery.

The Cogstate Battery evaluated six domains of cognition, with the goal of broadly investigating whether 20mg Xanamem daily could positively influence cognition.

Results from this trial showed cognitive improvement in three of the six domains investigated after 12 weeks treatment.

Having the clear and exacting Cogstate Cognitive Test benchmark to measure results provided additional credibility, no doubt adding to the extent of ‘see through’ upside factored in by forward-looking investors who flocked to the stock.

The summary of these results which demonstrated an encouraging clinical efficacy signal in cognitive domains that are core to cognitive evaluation across many diseases is shown below.

Note that effect size is a quantitative measure of the magnitude of a result indicating that treatment with 20mg Xanamem daily has a potentially important impact on these cognitive domains.

These breakthrough results reinforce the hypothesis and science underpinning the discovery and development of Xanamem, primarily working on the basis that lowering persistently raised cortisol levels in the brain is expected to positively enhance cognition.

Results from the study also showed that Xanamem, at a dose of 20mg daily, significantly reduced serum cortisol levels in the trial participants over the study period.

Furthermore, Xanamem 20mg daily exhibited a good safety profile over the 12 weeks of treatment, with no reports of serious adverse events.

Professor Michael Woodward from the Austin Health in Melbourne and one of the leading investigators in the XanADu trial said, “There have been so many past failures with the development of Alzheimer’s drugs, so these promising results offer renewed hope for a treatment breakthrough for this devastating disease”.

As a backdrop, the XanADu trial in mild Alzheimer’s patients showed that Xanamem 10mg daily was safe and altered the cortisol pathway, but did not demonstrate an improvement in cognition.

Underlining the fact that these results demonstrate an encouraging clinical efficacy signal in cognitive domains that are core to cognitive evaluation across many diseases, Actinogen Medical Clinical Advisory Board member, Professor Jeff Cummings from the Cleveland Clinic in the US said, “These results from the XanaHES study provide Actinogen with evidence of Xanamem’s ability to enhance cognition and inhibit cortisol production.

‘’Considering the broad array of medical conditions presenting with cognitive impairment and an associated raised cortisol, these promising results provide many opportunities for the ongoing development of the drug.”

These observations are particularly significant for Actinogen from a financial perspective as they indicate the prospect of tapping into a much more sizeable market than is open to other companies looking to develop drugs/treatments for a narrow field of specific disorders and diseases.

Highlighting the significance of these results in terms of future clinical development and commercialisation, Actinogen chief executive Bill Ketelbey said, “These are the results we have been looking for as they are hugely important for the development of Xanamem and for the potential for Xanamem to treat Alzheimer’s disease and other conditions associated with cognitive impairment.

“As we gather and analyse more data from XanaHES and the other ongoing studies, we are building a much clearer picture of Xanamem’s pharmacology, potential efficacy, safety, and mechanism of action, all of which will aid substantially in planning the future clinical development and commercialisation strategy for the drug.”

Meeting these milestones could well provide significant share price momentum for Actinogen, but it is also worth noting that the company has multiple studies underway, any of which could be a share price catalyst.

These are outlined below. 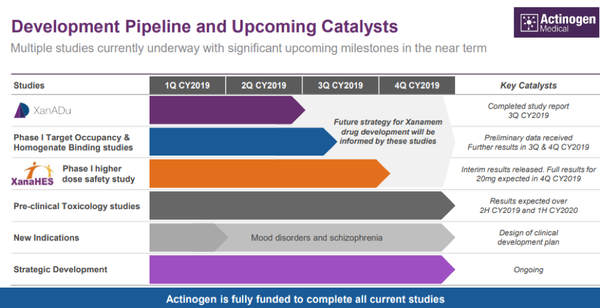