Debate on housing affordability in Australia continues, with several industry leaders weighing in over the past month.

Burgess, who also serves as the chairman of the investment committee for industry fund HESTA, claimed it was difficult to see how the global economy could maintain the trending stability it has demonstrated over the past decades.

“A trend can make you look a lot smarter than what you are, I’d say my career has been built on a lucky trend. This has essentially been a golden 30 years for equities.”

Burgess puts this sustained period of stability down to “Good growth and a rising share of GDP for corporations.”

Whilst presenting at a Melbourne business breakfast on May 25th, Burgess said he believed increased levels of immigration and flat wage growth were making the market difficult to break into for the incoming generation.

Australian house prices have ballooned over the past decade, with the average median price in some cities exceeding 10 times the average income. Melbourne and Sydney have been at the forefront of the phenomenon, sustaining double digit rises over several years. 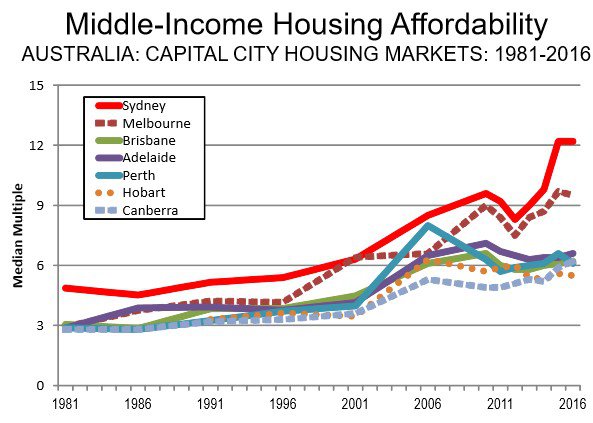 In addition, Burgess noted that Australia’s extraordinary appetite for investment properties was a concerning sign, which could impact the market moving forward.

“We have this strange thing that you don’t see anywhere else in the world with property investment. Two million people had investment properties in 2013 and I’m sure it’s much higher today.”

Burgess said the level of investment was unsustainable.

“Supposing we had some disaster, people will try to sell one of their investment properties. If it’s a real disaster they will stick the other five on the market and see which one sells. Many of the others will do the same thing and we will have our moment of correction.”

In contrast, Simon Pressley who is the managing director of Propertyology, believes public opinion about the affordability crisis is inaccurate.

“Let’s be honest, the housing affordability ‘crisis’ is Sydney-centric. Sydney has issues, there’s no denying that – but that’s nothing new. It’s been the most expensive city in the country for the last five or six decades.

“We need to look outside of Sydney and have a conversation about the rest of Australia. You can buy affordable properties under $500,000 in locations across Australia, including houses for $350,000 to $400,000 in capitals such as Brisbane and Hobart,” he explains.

Pressley believes a proactive approach, such as waiving stamp duty to those who relocate from large urbanised areas, could improve affordability in larger cities.

However, Pressley’s opinion may falter under recent property performance.

Alena Chen, who is the Senior Analyst and vice president of Moody’s Investor Services, reported a decline in affordability in the first quarter of 2017.

The report, which examines house prices across the five major cities in Australia, supported the popular narrative of home ownership being out of reach for many Australians.

“Rising housing prices outstripped the positive effects of lower interest rates and moderate income growth,” she said. Chen pointed to the continued gains of markets in Sydney, Melbourne and Adelaide as a sign that affordability was not improving anytime soon.

“In the near term, we expect housing affordability to continue to deteriorate because of ongoing housing price increases.”

Whilst improvements were noted in Perth and Brisbane, the average median price across both cities was roughly $750,000 as of March 2017, which is still around five to six times higher than the average income today.